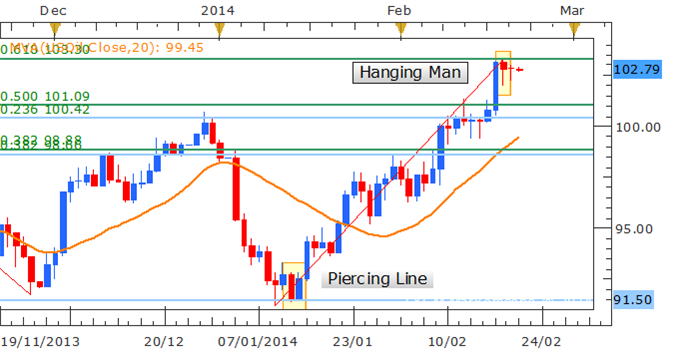 Gold and Silver Drifting Lower as US Dollar Continues Advance

Gold and silver are floundering in Asian trading as the US dollar continues its cautious advance higher. With a light economic docket for the final trading session of the week, the precious metals are unlikely to find a catalyst spark a turnaround.

The US Dollar is heading for its fifth straight session of gains in early trading. US inflation data that printed in-line with expectations and a slightly weaker-than-expected jobless claims print released overnight, did little to alter the upward trajectory of the currency.

The recent recovery in the greenback has likely suppressed gains in gold over the past several trading sessions as the precious metal heads for a flat finish for the trading week. While profit-taking has likely played a part in helping the USD recover some lost ground, a more compelling reason for the rally may lie with firming Fed policy expectations.

A hawkish tone in the Fed January meeting minutes released this week, bolstered the greenback and weakened demand for gold as a fiat money alternative. Thus going forward, in the absence of a material deterioration in US economic data, the prospect of continued stimulus cuts may fuel further US Dollar gains, which may in turn weigh on gold and silver.

The Department of Energy’s Weekly Petroleum Status Report revealed that distillate inventories declined by 339K barrels, which was far less than economists’ expectations for a fall of 2.1 million. While the report suggested weakness for WTI, a general drift higher in risk-assets likely offset declines, leaving the commodity flat for the session.

CRUDE OIL TECHNICAL ANALYSIS – The Doji candlestick posted on the daily does little to confirm a potential reversal signal from the Hanging Man pattern preceding it. Without a more meaningful sign of a correction given the ongoing uptrend, we are left with a bullish technical bias for oil. Key resistance looms overhead at $103.30.

GOLD TECHNICAL ANALYSIS – The recent rally in gold is showing signs of fading upside momentum as the precious metal wavers around the $1,320 mark. However, given the uptrend is still intact a more meaningful reversal signal would be required before offering a bearish bias. Buyers appear to be prepared to support gold at $1,309. 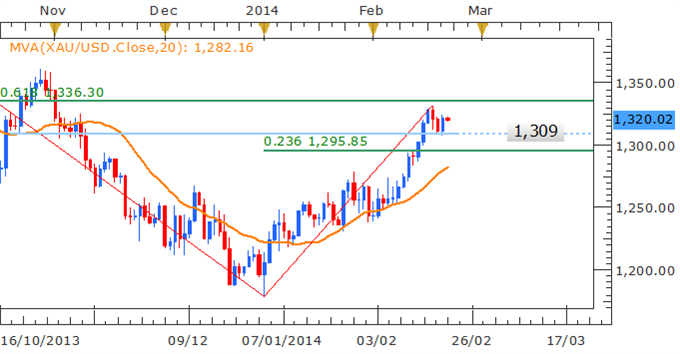 SILVER TECHNICAL ANALYSIS – Recent price action in Silver is indicative of indecision amongst traders with the precious metal. The daily chart has posted a Harami candlestick pattern, indicating buyers have been unable to push prices back towards their recent highs. A shift in the trend would be needed before offering a bearish bias. 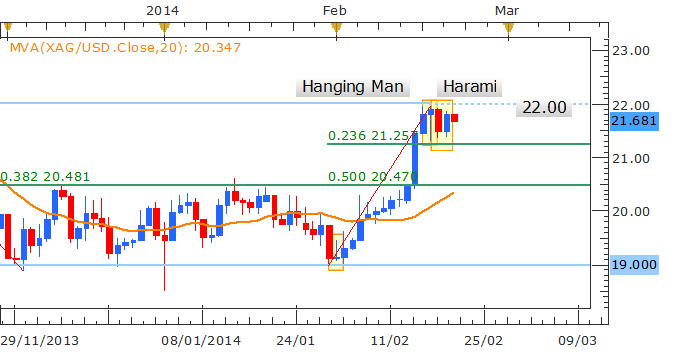 COPPER TECHNICAL ANALYSIS– While copper has recovered some lost ground over the past couple of weeks, sellers are capping further gains at the $3.30 level. This has resulted in a Hanging Man formation on the daily which is warning of a potential correction ahead. However, there is an indication of an uptrend (with prices above their 20 SMA), thus waiting for a shift in the trend would be preferred before looking at shorts. A break below nearby buying support at $3.255 may open a further decline towards the 2014 low at $3.175. 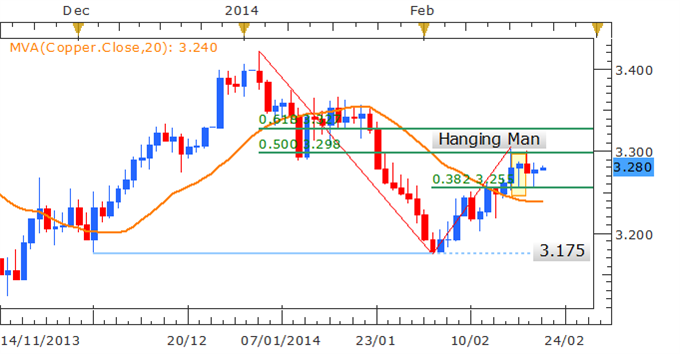