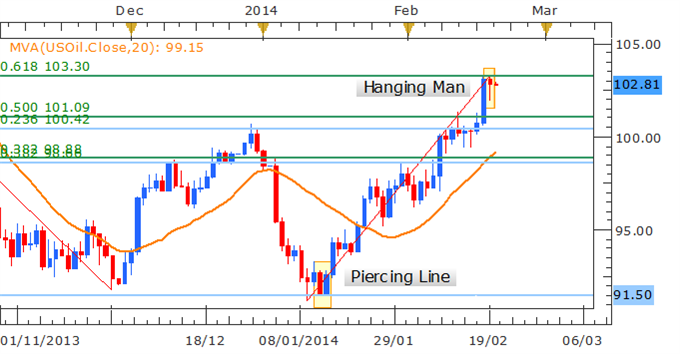 Gold and silver have dipped following the release of a relatively hawkish set of FOMC minutes which prompted a return to the US Dollar. A string of key US economic data prints set to be released over the next 24 hours may give the commodities space further bearings.

January’s FOMC meeting minutes released today revealed the US Federal Reserve is likely to continue reducing stimulus unless the outlook for the US economy deteriorates. The prospect of continued cuts to the Fed’s bond buying program likely prompted traders to return to the US Dollar which in turn weighed on Gold and Silver prices.

Beat on Jobs and CPI Data May Weaken Gold Further

The next 24 hours will see the release of several key US economic figures that may offer further guidance to the greenback and thus precious metals. CPI data is expected to reveal an incremental 0.1 percent tick up in the rate of headline inflation, while US initial jobless claims are tipped to decline to 334,000.

Both economic indicators hold significance for Fed policy, thus if we see a stronger jobs figure and higher-than-anticipated inflation reading, it would likely firm ‘Taper’ bets which may in turn weaken gold and silver.

Oil traders will be taking cues from the upcoming Department of Energy’s Weekly Petroleum Status Report which is tipped to show a fall in distillate inventories of 2.1 million barrels. This would mark the 6th consecutive decline for the measure and may be attributable to freezing weather conditions on the US East Coast raising demand for heating oil. A higher-than-anticipated drawdown would likely spark a rally for oil based on a reflection of increased demand for the commodity.

CRUDE OIL TECHNICAL ANALYSIS – The advance towards $103.30 (61.8% Fib Retracement level) has been completed. With a Hanging Man candlestick formation having been put up on the daily near key resistance, there is warning for a potential reversal ahead. However, given that the uptrend remains intact, caution should be exercised when looking to short the commodity. Support may emerge at the $101.09 mark which was prior resistance.

GOLD TECHNICAL ANALYSIS – The reversal suggested in the most recent commodities update has played out with gold having declined further during recent trading. However, given the uptrend remains intact further follow-through and a more meaningful shift in momentum is required before offering a bearish bias. Buyers are likely to emerge between the $1,300-$1306 support zone. 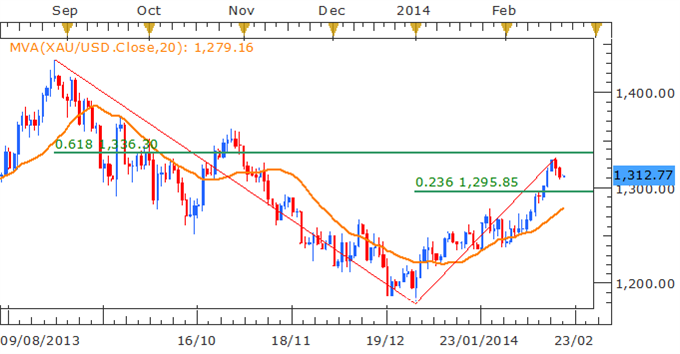 SILVER TECHNICAL ANALYSIS – Silver’s string of recent gains has finally been broken with the precious metal posting the first down day in 13 trading sessions. The bulls seemingly lost their grip on the commodity shy of the psychologically significant $22.00 handle. With a Hanging Man candlestick formation and follow-through on the daily, a more meaningful reversal may be underway. Support rests nearby at the 23.6% Fib Retracement level at $21.25. 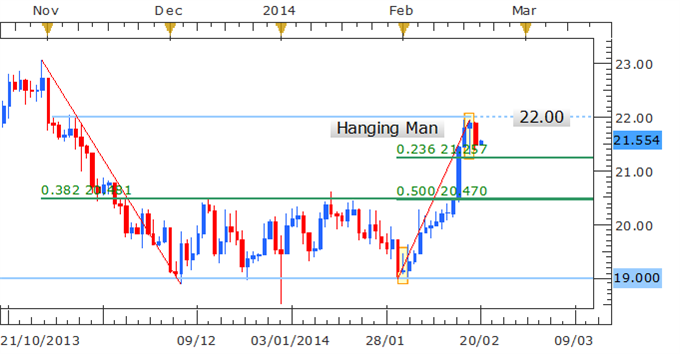 COPPER TECHNICAL ANALYSIS– $3.30 continues to be an important resistance level for copper and has acted to restrain further gains for the commodity. The formation of a Hanging Man candle on the daily is suggesting a potential correction ahead with buyers likely to emerge at the nearby $3.255 mark (38.2% Fib Retracement level). 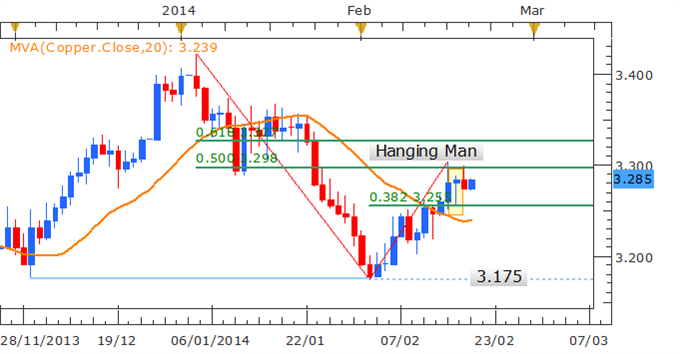