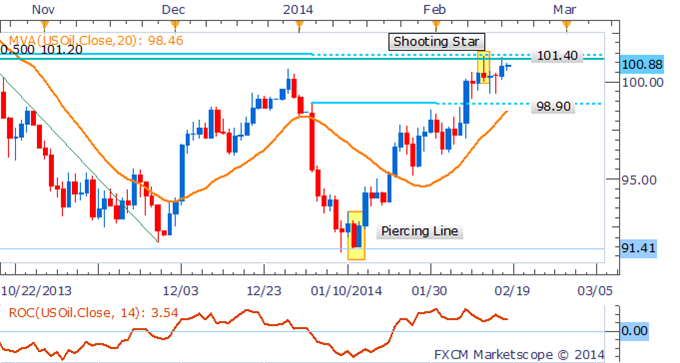 Gold is retreating from its highest level in a more than two months as a broad-based US dollar rally appears to be undermining the precious metals space. Meanwhile crude oil has failed to break through notable resistance at $101.40 and is treading water ahead of the US trading session.

The greenback continues to recover lost ground which is likely weighed on silver and gold. With broad-based risk aversion characterising early European trading, the reserve currency appears to be once again benefiting from safe-haven flows.

A possible reason for the declines in risk assets may lie with reports from newswires that Chinese monetary authorities have reduced liquidity in domestic money markets. Profit-taking amongst investors is also a likely contributor, given the string of consecutive gains for instruments like the SPX500 over the past two weeks.

Reversal In Risk Trends May Bode Ill For Precious Metals

Risk appetite will continue to be important driver to monitor over the coming week given its influence on the USD and hence gold and silver. Given the early indications of a potential reversal in risk assets, a more meaningful dampening of investor sentiment would likely bode ill for the precious metals space, and may additionally weigh on crude oil as a growth-sensitive commodity.

CRUDE OIL TECHNICAL ANALYSIS – The uptrend highlighted in recent reports persists and earlier reversal signals have shown little follow through. A break above noteworthy resistance at $101.40 (the 50% Fib retracement level) would open up the $103.43 mark.

GOLD TECHNICAL ANALYSIS – As noted in yesterday’s report the gains in gold have looked over-extended recently, given prices have moved significantly away from their 20 SMA. With a Bearish Engulfing pattern now forming on the daily there could be an indication of a potential reversal for the precious metal. However given the uptrend remains intact a follow through and more meaningful shift in momentum is required before offering a bearish bias. Buyers are likely to emerge between the $1,300-$1306 support zone. 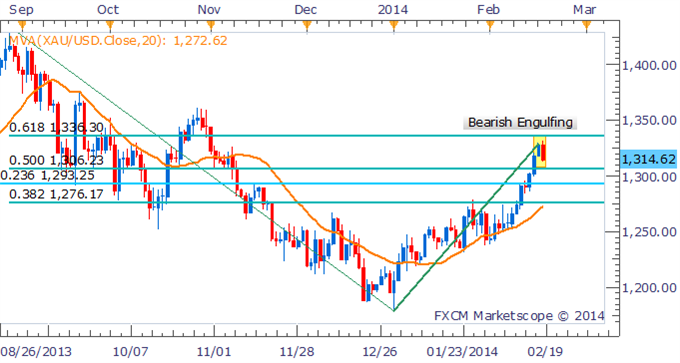 SILVER TECHNICAL ANALYSIS – Silver is showing similar signals to gold of a potential reversal. Buyers appear to be losing their grip on the pair around the support/resistance level at 21.47. The next level of buying support is likely to emerge at the breakout point of 20.461. 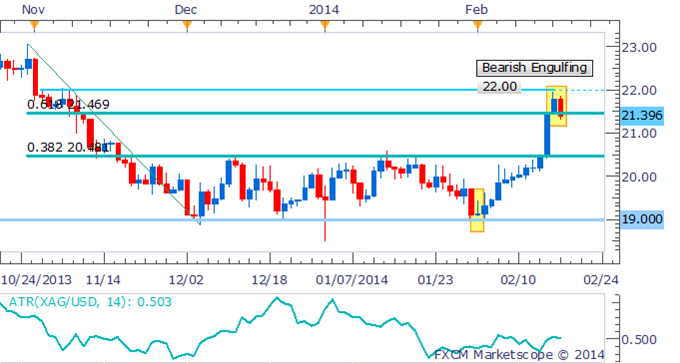 COPPER TECHNICAL ANALYSIS– As noted in yesterday’s report the $3.300 level for copper has constrained further gains for the commodity. A Dark Cloud Cover candlestick pattern now appears to be forming of the daily, warning of a potential bearish reversal. However, as is suggested with trading reversals, more meaningful confirmation is needed before offering a bearish bias. 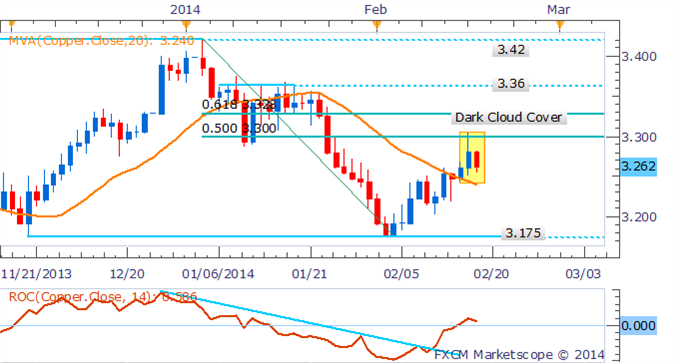