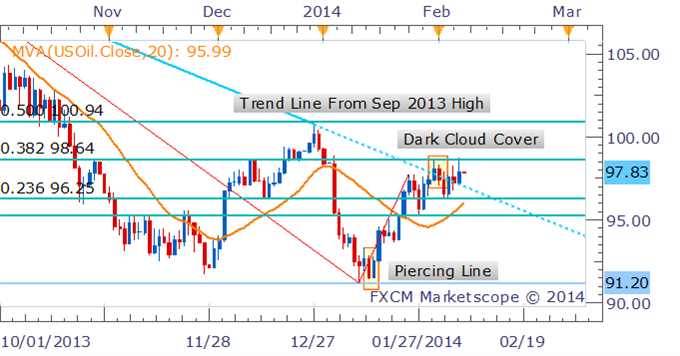 Crude oil and copper rallied while gold erased early gains following a better-than-expected set of jobless figures which likely helped to bolster investor risk appetite. The data from the Department of Labor revealed a drop of 20,000 in initial jobless claims, while economists had been tipping a more moderate dip of 16,000.

The recent rebound in risk assetsfollows on from a bout of risk-aversion based on concerns over emerging markets, which had weighed on growth-sensitive commodities like copper and oil. The reversal of some of the fear-flows witnessed during that period may prove supportive for WTI going forward.

Commodities traders will likely be taking cues from the highly-influential US Non-Farm Payrolls data which is set to cross the wires early Friday morning Eastern Time. Following aseverely disappointing reading for December of 74K, the January figures are penciled in to arrive at a healthier 175K. An upside surprise would likely further improve risk sentiment which may benefit WTI along with other risk assets.

A continued improvement in the US labour market also has implications for Fed policy whereby a stronger-than-anticipated NFP print would likely firm ‘taper’ expectations. This in turn may weaken demand for gold as a fiat-money alternative and weigh on the precious metal.

CRUDE OIL TECHNICAL ANALYSIS – Resistance at $98.64 (the 38.2% Fib Retracement level) continues to cap gains for oil as the recent uptrend shows signs of slowing. A Dark Cloud cover formation has also provided an indication of a potential reversal yet further confirmation is needed before giving a bearish bias on the commodity.

GOLD TECHNICAL ANALYSIS – The consolidation in gold has continued in recent trading with buyers sitting at 1,254 helping to support prices while overhanging resistance at 1,270 has capped further gains. A daily close below 1,254 may help support a bearish bias for the precious metal. 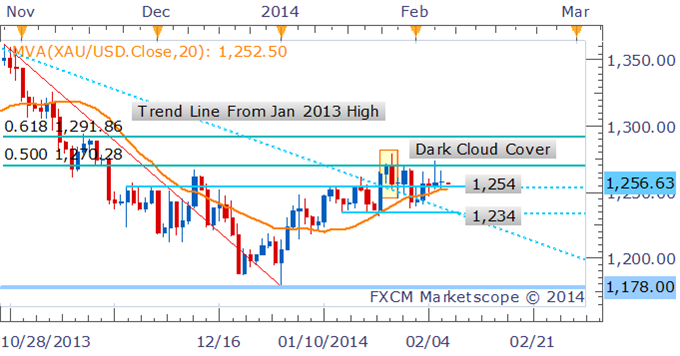 SILVER TECHNICAL ANALYSIS – Silver has presented short entry opportunity as buyers have been unable to push prices back above the descending trend channel from Aug 2013. A Shooting Star formation on the daily also supports a bearish bias on the commodity. $19 remains a level of strong support that could offer a potential target. If an upside break occurs, selling pressure may emerge once again at the 20.48 mark. 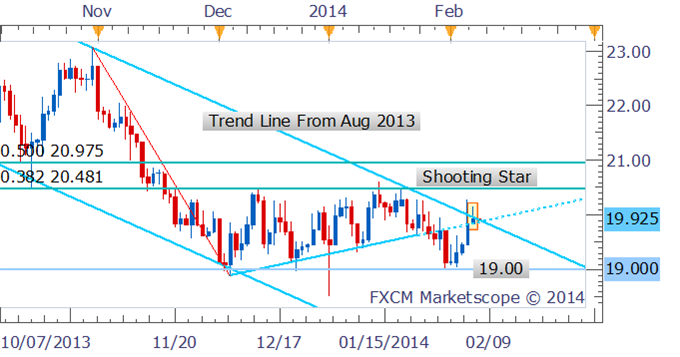 COPPER TECHNICAL ANALYSIS– The $3.233 level of resistance may be offering another opportunity to enter short. A bearish bias is supported by a downtrend on the daily and a head and shoulders formation which has offered a target of $3.150. 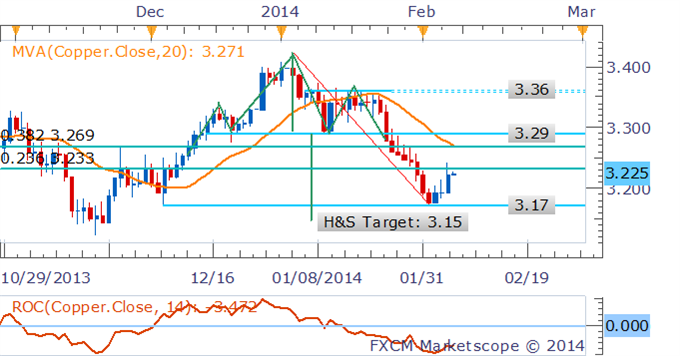