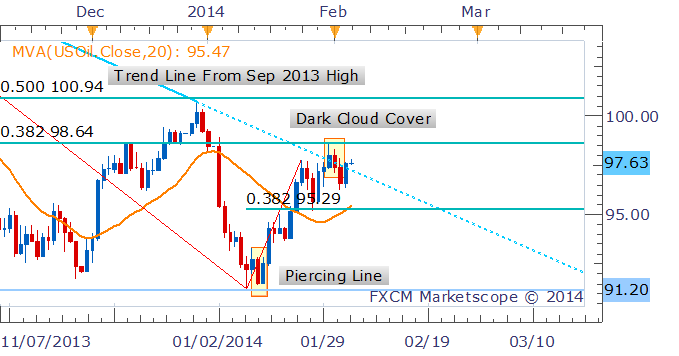 Crude oil recovered alongside other risky assets including the S&P 500yesterday, with newswires attributing the move to an improvement in investor sentiment as concerns over emerging markets begins to ease. Meanwhile,gold suffered as a drop in safe-haven demand for US Treasuries caused US 10 year yields to rise, which in turn increased the opportunity cost of holding the precious metal.

Risk trends continue to play a large part in the commodities space. This has been particularly evident in copper, which is reboundingafter nine consecutive days of losses that occurred during the recent bout of risk aversion. If the upcoming US ADP Employment data and ISM Services figures continue the string of downside surprises in economic news-flow, risk appetite may sour once more and lead copper as well as oil prices lower.

Outside of broader sentiment considerations, the weekly Department of Energy Inventories report may offer traders additional directional guidance oil. Distillate inventories are tipped to fall by a further 2.5 million barrels according to the median estimate from economists polled by Bloomberg, which would mark the fourth consecutive weekly decline.

Media sources have attributed the recent run-down in distillate inventories to higher heating oil requirements stemming from ongoing cold weather conditions on the US East Coast. A greater-than-anticipated dip in the inventory figures would likely signal higher demand for oil and strengthen the WTI contract.

CRUDE OIL TECHNICAL ANALYSIS – Oil prices are still putting up a series of higher highs and higher lows, indicating a continuation of the recent uptrend. However, a wavering around the trend line from the Sep 13 high and a Dark Cloud cover candle pattern may be warning of a potential reversal. This leaves a mixed technical bias for the commodity.

GOLD TECHNICAL ANALYSIS – Price action in gold continues to reflect indecision amongst traders. A wavering around 1,254 and the 20 SMA gives little indication of the direction of the short-term trend. A break below 1,234 continues to be preferred before offering a bearish bias on the commodity. 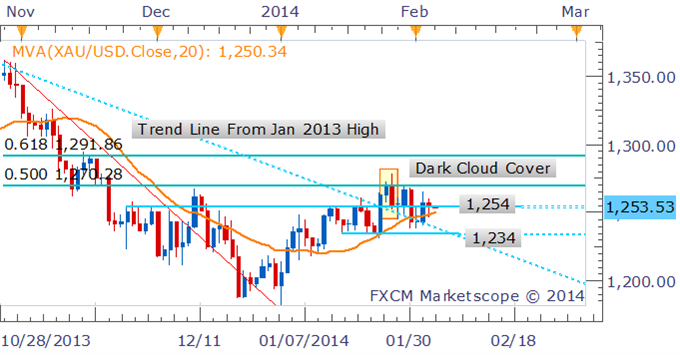 SILVER TECHNICAL ANALYSIS – The bounce recently highlighted in Silver has continued with notable buying support resting at the $19.00 handle. As noted previous, shorts are preferred on a retracement back to the top of the descending trend channel. 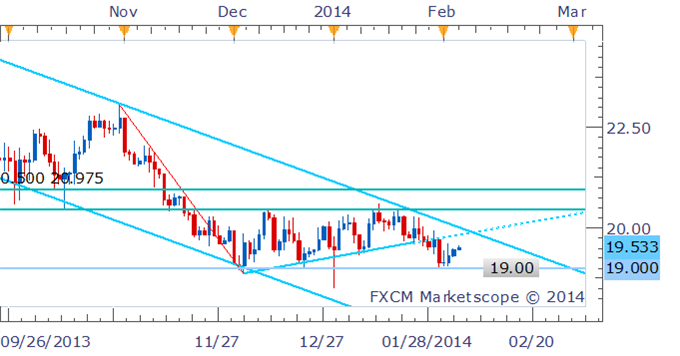 COPPER TECHNICAL ANALYSIS– As suggested, the over-extended declines in copper left the commodity prone for a corrective bounce. Selling pressure may emerge again at the $3.233 figure (23.6% Fib Retracement Level). Against the backdrop of a short-term downtrend, a further recovery to overhanging resistance would be seen as an opportunity to enter new short positions. 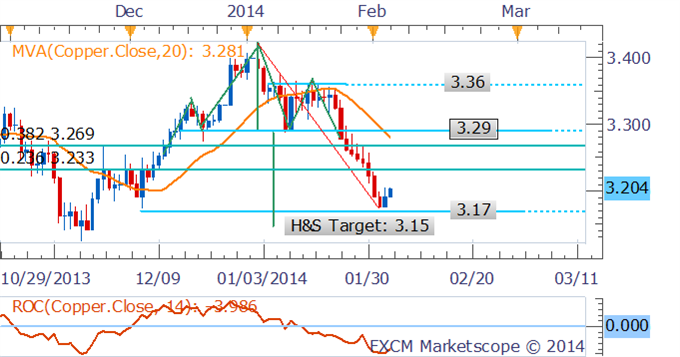