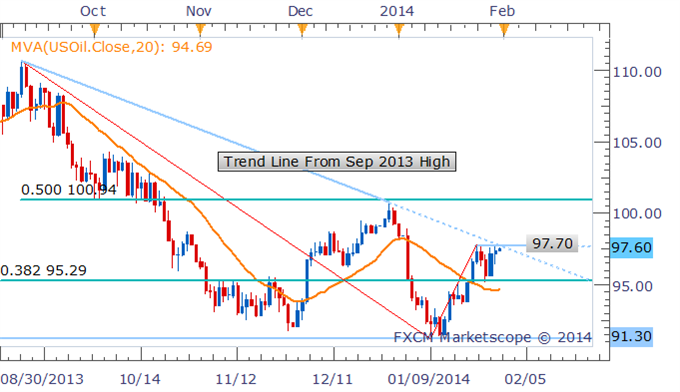 Gold and silver are correcting downwards in overnight trade having advanced following the Federal Reserve’s decision to reduce their asset purchase program by a further $10 billion. The stimulus reduction was widely anticipated by economists and the policy statement produced no changes in the forward guidance framework. In this context, the move higher in the precious metals space may have reflected relief at the passing of key event risk without an unforeseen hawkish policy shift.

Crude oil strengthened after the weekly set of DOE inventory figures showed distillate stockpiles fell by the most in 10 weeks. Newswires attributed the falling inventory levels to a rise in heating fuel demand due to ongoing cold weather conditions. The intraday uptrend largely overlooked the FOMC meeting: the WTI contract briefly dipped downward as the Fed reduced stimulus further but quickly resumed its prior advance as the outcome proved to fall in line with expectations.

Tomorrow’s fourth-quarter US GDP figures will likely provide some additional guidance for the US Dollar and thus have implications for the commodities space. US economic news-flow has gradually deteriorated relative to expectations in recent weeks (according to data from Citigroup), with notable misses on December’s Nonfarm Payrolls and Durable Goods Orders reports A similar pattern is expected on the GDP front: the year-on-year growth rate is seen slowing to 3.2 percent from 4.1 percent recorded in the third quarter.

A soft patch in the US recovery clearly didn’t prompt the Fed to slow the pace of QE reduction, so a print in line with expectations is unlikely to offer fresh fodder for US Dollar sellers. On the other hand, an upside surprise would mark a departure from recent dynamics and has scope to push the greenback higher. Such a scenario would bode ill for precious metals amid ebbing anti-fiat demand. Meanwhile, crude oil may likewise rise if stronger-than-expected US performance boosts risk appetite.

CRUDE OIL TECHNICAL ANALYSIS – Oil is testing critical resistance at $97.70 following a bounce off support at the 38.2% Fib retracement level at $95.29. The commodity has continued to put in a series of higher highs and higher lows over the past couple of weeks, however, a break below the descending trend line from Sep 2013 would be required before offering a bullish bias.

GOLD TECHNICAL ANALYSIS – The Dark Cloud Cover candlestick formation which was warning of a potential reversal for gold has found little confirmation. Buying support for the precious metal has emerged once again at $1,256 which coincided with a test of the Trend line from the Jan 2013. A break above resistance at $1,270 would be required before offering a bullish bias on the commodity. 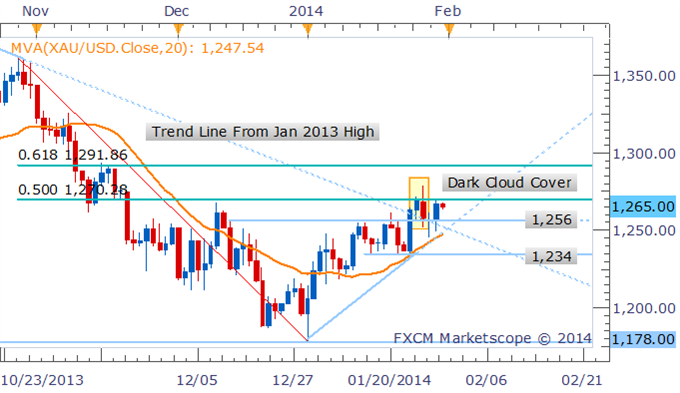 SILVER TECHNICAL ANALYSIS – Silver is testing the bottom of the ascending triangle formation on the daily which comes as sellers have kept prices contained within the descending channel. A break to the downside may open up the psychologically significant $19 handle, which offered buying support in December 2013. 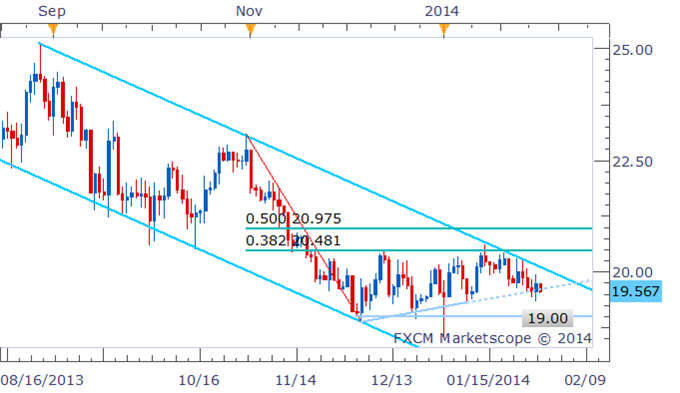 COPPER TECHNICAL ANALYSIS– The technicals are continuing to suggest weakness for copper in the near-term. The Head and Shoulders pattern on the daily has offered a target of $3.15, with more immediate support at $3.18. The bearish bias is aided by the descending trend channel and prices tracking below the 20SMA. 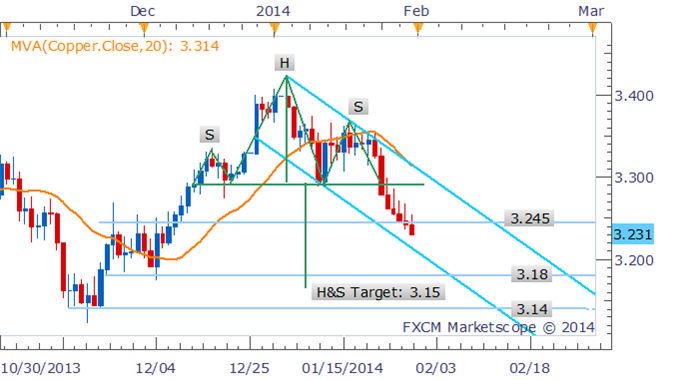