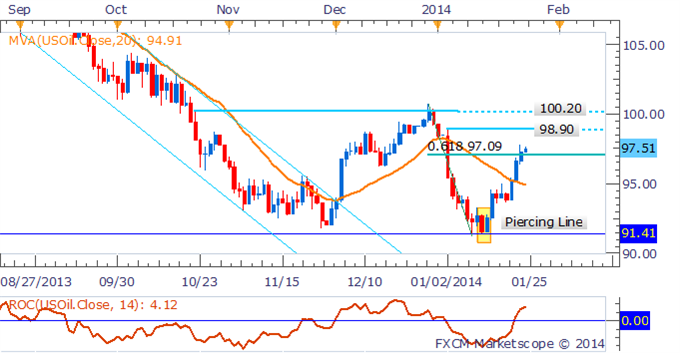 Crude Oil, Gold Looking Ahead to Next Week's FOMC Outcome

Gold put in its best single-day performance in three months yesterday, rising 2.2 percent. The move began in Asia and accelerated in European hours in what appeared to be a response to soft Chinese PMI figures. The report sparked risk aversion, driving safe-haven demand for US Treasury bonds and consequently sinking yields. That weighed against the US Dollar and reduced the opportunity cost of owning gold versus yield-bearing assets.

Crude oil shrugged off negative sentiment cues however as the weekly DOEInventories report sent WTI higher for the fourth straight day.Crude stockpiles grew by 990,000 barrels for the week, falling short of expectations calling for a 1.15 million increase. Meanwhile, distillate inventories plunged by 3.2 million barrels, a vastly larger drawdown than the 561,000 drop penciled in by economists ahead of the report. Newswires suggested this reflected a swell in heating demand as frigid weather conditions continue to grip the East Coast.

Looking ahead, a light economic docket may leave commodity prices wanting for a fresh catalyst to spur directional momentum. This may result in some consolidation into the weekend. Trading activity is likely to be reignited next week however in the lead-up to Wednesday’s FOMC policy meeting. Economists are currently expecting the central bank to continue “tapering” QE asset purchases at a rate of $10 billion per month. Any deviation from this dynamic or clues about a possible strategy adjustment in upcoming meetings that emerges in the statement accompanying the announcement is likely to drive volatility.

The DailyFX Speculative Sentiment Index is providing a mixed bias on gold.

CRUDE OIL TECHNICAL ANALYSIS – The 61.8% Fib retracement level is suggesting some support around the psychologically significant $97 handle, while resistance looms ahead at 98.80 (the yearly high). A short-term uptrend as signaled by gaining upside momentum on the rate of change indicator, as well as prices being above the 20 SMA, favors the upside.

GOLD TECHNICAL ANALYSIS – The 38.2% Fib retracement level and 20 SMA provided a launching pad for gold as buyers moved in and swung prices above previous resistance (now support) at $1,256. A break above the December 2013 high at $1,264 would open up the $1,270 level. 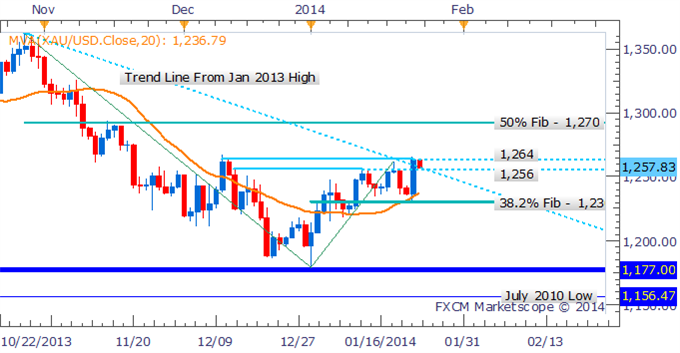 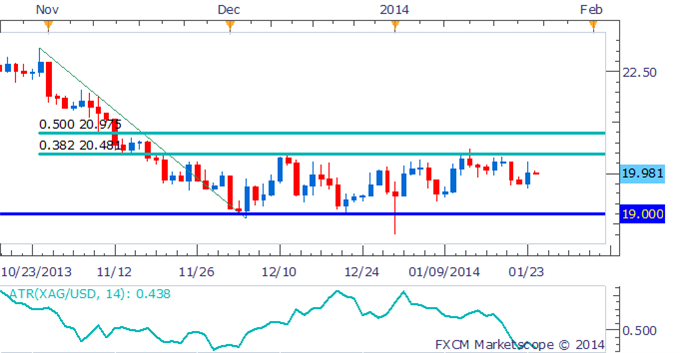 COPPER TECHNICAL ANALYSIS– Copper has found some buying support at $3.273 following the break below an ascending triangle pattern. A move below the 50% Fib retracement level would open up the $3.237 level. 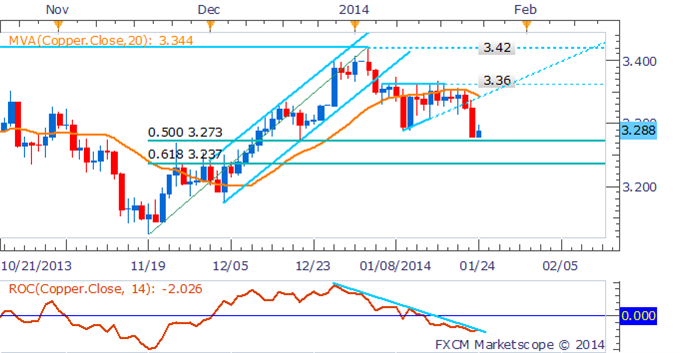