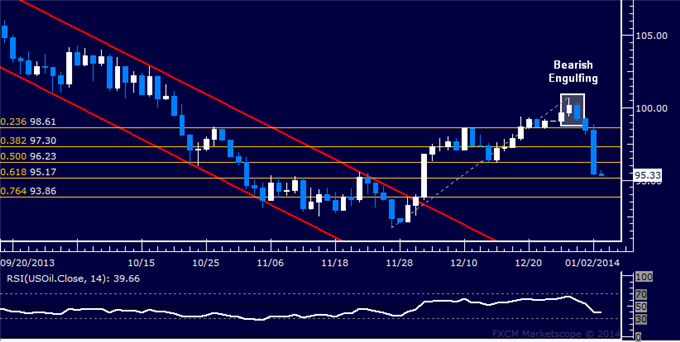 All eyes are on a busy schedule of “Fed-speak” due in the final hours of the trading week. Charles Plosser and Jeffrey Lacker – Presidents of the Philadelphia and Richmond branches of the central bank respectively – as well as Governor Jeremy Stein and Chairman Ben Bernanke are all on the day’s docket.

Rhetoric reinforcing the likelihood of continued “tapering” of the Fed’s QE3 program in the months ahead is likely to boost the US Dollar against most of its top counterparts. Meanwhile, precious metalsare likely to decline amid eroding anti-fiat demand. Alternatively, a more cautious tone stressing the data dependence of near-term policy as well as the idea that “tapering” doesn’t amount to tightening may yield the opposite effect.

Crude oil prices may find their catalyst in the weekly set of inventory figures from the US Department of Energy. The slide in the WTI contract from early September through late November was mirrored by a build in stockpiles at the pivotal Cushing, OK storage site. A recovery in December was likewise accompanied by a shallow drawdown in inventories. Expectations call for another decline in the week to December 27, which may help nudge prices higher (particularly after yesterday’s aggressive downswing of over 3 percent).

GOLD TECHNICAL ANALYSIS – Prices turned higher as expected after putting in a Harami candlestick pattern. Near-term resistance is at 1248.70, the 38.2% Fibonacci retracement, with a break higher targeting the 50% level at 1270.28. A turn back below resistance-turned-support at 1217.75 exposes a falling trend line at 1202.91. 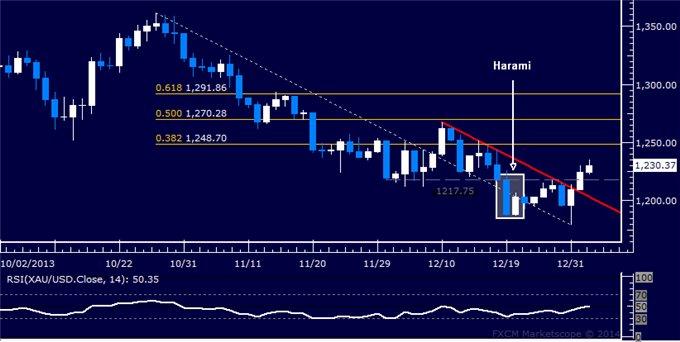