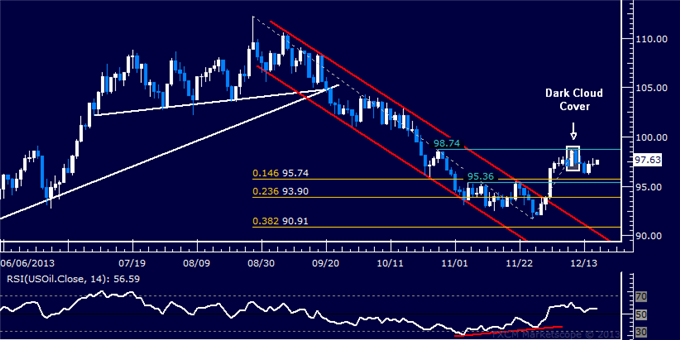 Commodity markets are likely to be singularly focused on today’s pivotal FOMC monetary policy announcement. On balance, the case for “tapering” the size of monthly QE asset purchases looks compelling:

Still, a survey of economists polled by Bloomberg suggests the baseline consensus view still favors a “no change” outcome, with only about 1 out of every 3 respondents looking for some kind of cutback in stimulus. That means volatility is in the cards as investors jostle to readjust portfolios in the event that a reduction of QE does materialize.

An outright decline in the amount of monthly asset purchases stands to boost the US Dollar. This creates a de-facto headwind for commodities benchmarked against the greenback, including gold and crude oil. Precious metals would be likewise vulnerable to erosion of inflation-hedge demand. Meanwhile, the WTI contract may be pulled into a larger risk aversion selloff. A panic swept financial markets in the spring and summer when the idea of “tapering” first emerged; if fears of rising funding costs yield the same outcome this time, the spectrum of cycle-sensitive assets may decline in tandem.

A decision to withhold any changes to existing policy this time around that is coupled with taper-supportive cues in the Fed’s updated set of economic forecasts and/or Ben Bernanke’s press conference may yield similar (albeit probably less dramatic) results. The move may be likewise diminished if the Fed – fearing a repeat of the volatility burst in the first half of the year – opts to soften the blow to sentiment by coupling a smaller asset uptake with a lowering of its unemployment or inflation thresholds.

CRUDE OIL TECHNICAL ANALYSIS – Prices declined as expected after putting in a bearish Dark Cloud Cover candlestick pattern. Support is in the 95.36-74 area, marked by the 14.6% Fibonacci expansion and the November 6 high. A further push below that eyes 93.90, the 23.6% Fib. Resistance is at 98.74, the October 28 high.

GOLD TECHNICAL ANALYSIS – Prices may be carving out a bullish Head and Shoulders bottom chart formation. Confirmation requires a close above resistance in the 1260.84-68.84 area, marked by the October 11 low and the 38.2% Fib retracement. A break higher initially exposes the 1286.57, the 50% level. Near-term support is at 1211.44, the December 6 low. 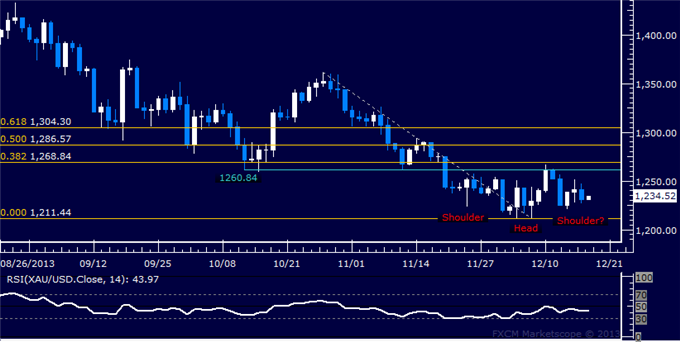