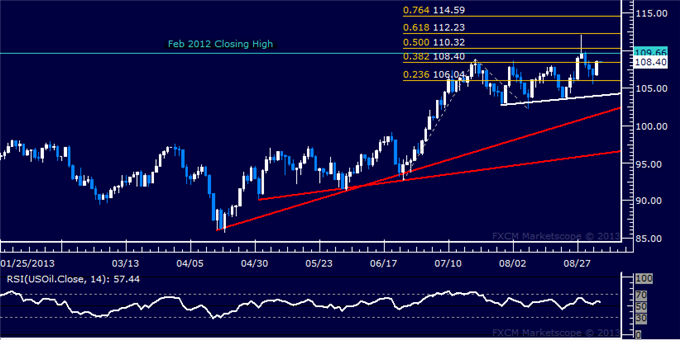 Commodity prices are under pressure as risk aversion sweeps financial markets in European trade, although familiar trading patterns are not holding up in a consistent way. Sentiment-sensitive crude oil and copper prices are following shares lower, which falls in line with what might be expected. The precious metals space is a bit confounding however.

In the past, gold and silver often found themselves looped into broader risk aversion via the US Dollar: unraveling sentiment drove haven flows into the greenback and punished anti-fiat assets by default. This is notably not the case this time around: risky assets, precious metals and the US unit are all under pressure in unison.

Looking ahead, S&P 500 futures are trading little-changed ahead of the opening bell on Wall Street, suggesting sentiment trends have yet to fully commit to a directional bias and warning that the landscape may change in the coming hours. The Federal Reserve’s Beige Book survey of regional economic conditions is in focus on the economic calendar.

Markets will likely interpret the release in terms of its implications for speculation surrounding the central bank’s intent to begin “tapering” QE asset purchases. Typically, a softer tone that is seen as limiting the scope for stimulus reduction beyond the widely expected September cutback could be interpreted as negative for the Dollar and supportive for risky assets as well as precious metals. Rhetoric pointing to confidence in the global recovery might be expected to yield the opposite effect.

Drawing such stark contrasts in the current environment seems foolhardy however. Price action is clearly suggesting that standby “risk on/off” and “taper on/off” dynamics are not being fully realized. Past responses to Syria-linked news-flow points the spotlight away from that catalyst as well. Indeed, crude oil and gold moved inversely of stocks when that was the active catalyst. On balance, this makes for a clouded environment that calls for the utmost caution going forward.

GOLD TECHNICAL ANALYSIS – Prices turned lower as expected, taking out support at the bottom of a rising channel set from early August to expose the 23.6% Fibonacci retracement at 1373.79. A bounce from this support is seeing prices retest the channel bottom (1427.44) as resistance, with a break above that eyeing the August 28 high at 1433.61 anew. Alternatively, a reversal below 1373.79 targets the 38.2% level at 1336.79. On balance, the bounce appears corrective for now. 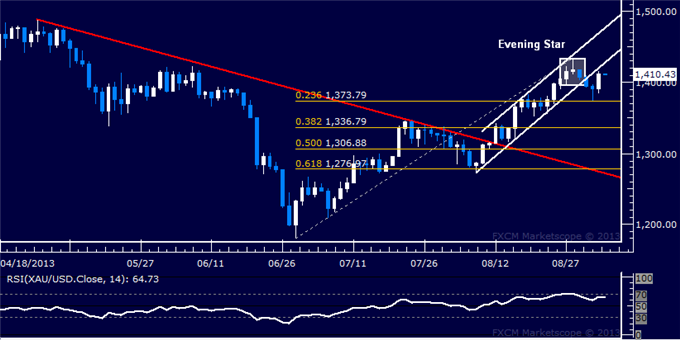 SILVER TECHNICAL ANALYSIS – Prices bounced from falling trend line resistance-turned-support to move toward another test of 24.75, the 38.2% Fibonacci retracement. A break above this barrier exposes the 50% level at 26.78. Trend line support is now at 22.81, with a reversal back beneath that eyeing the 23.6% Fib at 22.25. 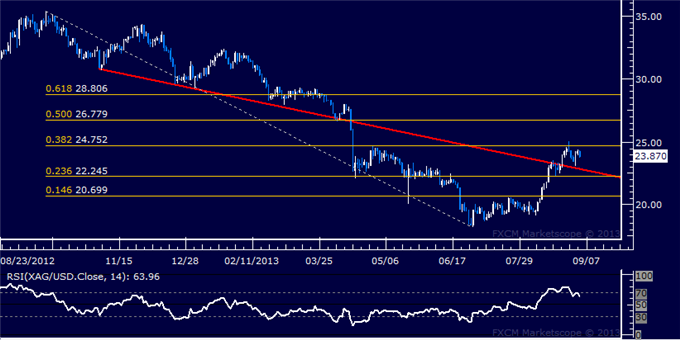 COPPER TECHNICAL ANALYSIS–Prices pulled back as expected, finding initial support at 3.233 marked by the 38.2% Fibonacci retracement. A further push beneath that eyes the 50% level at 3.186. Near-term resistance is at 3.313, followed by a major triple top at 3.378. 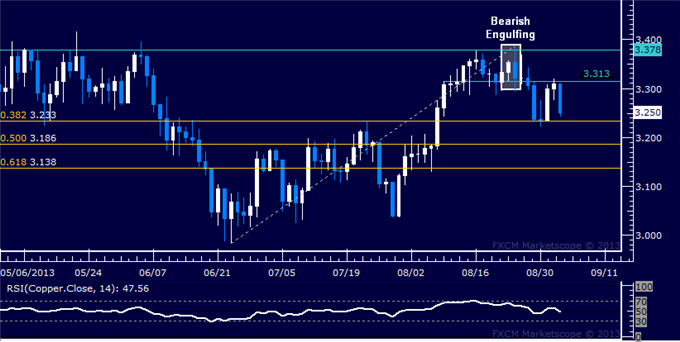