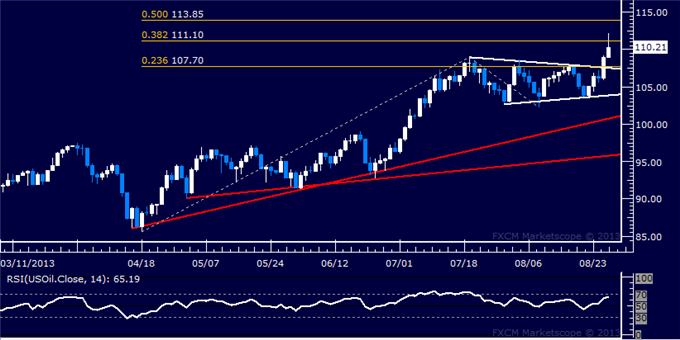 Gold soared to the highest level in three months while crude oil touched a two-year high amid worries about an expanding conflict in Syria.

Gold prices soared to a three-month high while crude oil spiked its most expensive level in over two years amid continuing worries about an expanding conflict in Syria. Fears of regional spillover and a possible disruption in oil deliveries that hurts global economic growth emerged early in the week after US Secretary of State John Kerry said the Syrian government will be held accountable for its use of chemical weapons. The situation remains in flux, with price action highly susceptible to headline risk.

July’s US Pending Home Sales report headlines the economic calendar, with a 7.9 percent year-on-year increase expected. This would mark the weakest print in four months, which may trim speculation about the Fed’s intention to “taper” the size of its QE effort. A move to reduce asset purchase by a nominal amount in September seems all but assured by the central bank’s rhetoric but a marked softening in economic news-flow over the past two weeks may see the FOMC return to wait-and-see mode thereafter.

Speculation about such a scenario encouraged by a soft Pending Home Sales print may put pressure on the US Dollar and boost risk appetite as investors become increasingly comfortable with the inevitability of a September cutback and look beyond it. Such a result would bode well for growth-geared commodities including oil and copper as well as precious metals. Still, the presence of Syria-linked uncertainty makes drawing firm conclusions about the significance of other catalysts a dangerous endeavor.

CRUDE OIL TECHNICAL ANALYSIS – The appearance of a Triangle chart pattern preceded upward continuation as expected. Prices are testing above resistance at 111.10, the 38.2% Fibonacci expansion, with a confirmed break higher on a daily closing basis exposing the 50% level at 113.85. Near-term support is at 107.70, the 23.6% level.

GOLD TECHNICAL ANALYSIS – Prices continued higher as expected after taking out resistance at the 76.4% Fibonacci expansion (1400.72). The bulls now aim to challenge 1440.23, a barrier marked by the intersection of a rising channel top and the 100% level. The 1400.72 mark has been recast as near-term support, with a reversal back beneath that eyeing the channel bottom at 1389.14. 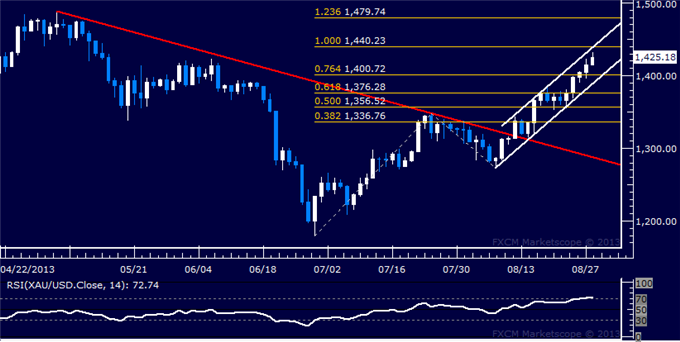 SILVER TECHNICAL ANALYSIS – Prices are testing resistance at 21.75, the 38.2% Fibonacci retracement, with a break higher confirmed on a daily closing basis exposing the 50% level at 26.78. Trend line resistance-turned-support is now at squarely at the 23.00 figure. 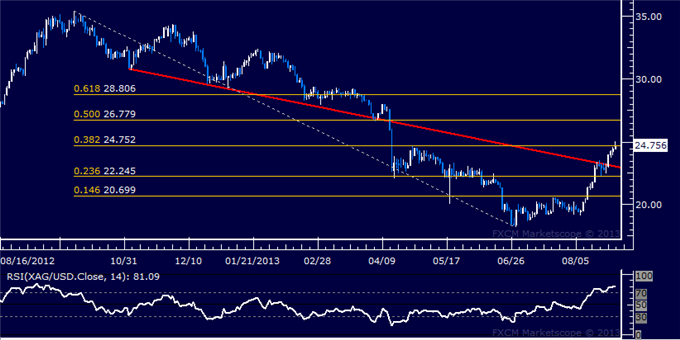 COPPER TECHNICAL ANALYSIS – Prices are consolidating above support at 3.286, the 23.6%Fibonacci retracement. Negative RSI divergence argues in favor of the downside scenario. A break downward initially targets the 38.2% level at 3.228. Near-term triple-top resistance is at 3.378, with added reinforcement from the 23.6% Fib expansion at 3.379.