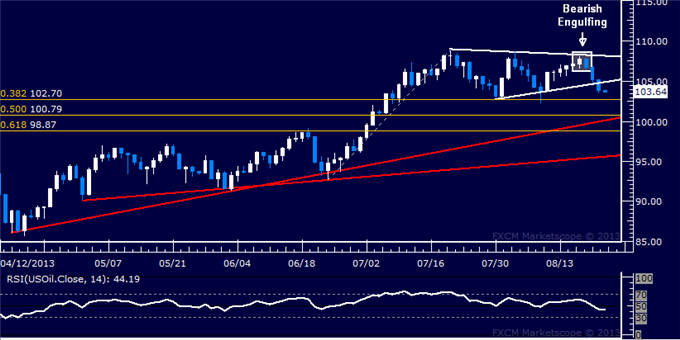 Crude oil may rise along with a broad recovery in risk appetite as financial markets continue to digest yesterday’s FOMC minutes release.

Commodity prices are on the upswing in European trade. Risk aversion noted in US and Asian hours in the wake of July's FOMC minutes seems to have receded, with markets likely settling on the idea that the release merely confirmed a status quo that was already well-known (i.e. that the Fed will taper in small size - perhaps about $10 billion - at the September meeting). Broadly supportive PMI readings from the Eurozone and China are likewise helping to underpin sentiment.

From here, the spotlight will shift to the Fed's Jackson Hole Economic Summit. The four-day symposium features an appearance from Janet Yellen, currently the Fed’s Vice Chair and one of the leading candidates to replace Ben Bernanke when his tenure ends in January 2014. If Yellen is indeed chosen to take the reins next year, it will be up to her to manage the Fed’s move toward monetary policy normalization. With that in mind, traders will be keen to hear what she has to say on the matter of QE reduction.

S&P 500 futures are pointing cautiously higher ahead of the opening bell in North America, hinting at a risk-on mood as Wall Street comes online. That points the way higher for cycle-linked crude oil and copper prices. If a more sober re-evaluation of yesterday’s FOMC minutes release is indeed the primary driver now underpinning risk trends, gold and silver ought to advance as well. With that said, markets remain very headline-sensitive, leaving assets vulnerable to sudden changes in sentiment.

CRUDE OIL TECHNICAL ANALYSIS – Prices pulled back after putting in a Bearish Engulfing candlestick pattern, taking out the bottom of a Triangle chart pattern to expose the 38.2% Fibonacci retracement at 102.70. A further push beneath that eyes the 50% level at 100.79. Alternatively, a turn back above the Triangle top (now at 104.80) aims for the formation’s upper boundary at 108.05. 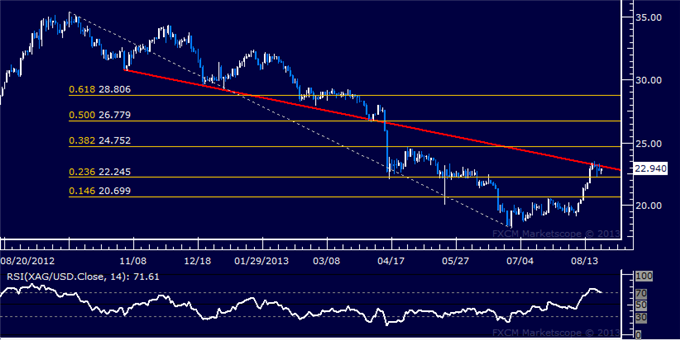 COPPER TECHNICAL ANALYSIS–Prices are rebounding from support at 3.286, the 23.6%Fibonacci retracement, with the bulls eyeing triple-top resistance at 3.378 anew. This barrier is reinforced by the 23.6% Fib expansion at 3.379. A break upward initially targets the 38.2% expansion at 3.437. Alternatively, a reversal below support aims for the 38.2% retracement at 3.228. 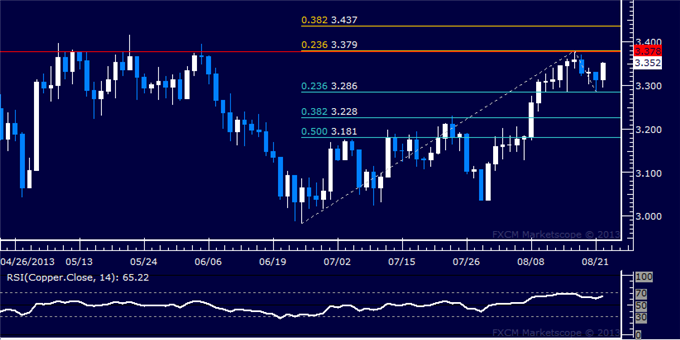