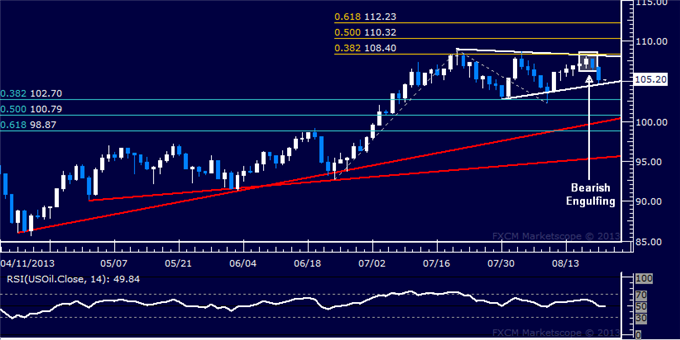 Crude oil and gold prices may yield divergent and somewhat counter-intuitive results if minutes from July’s FOMC meeting bolster the case for a September “taper”.

All eyes are undeniably on minutes from July’s FOMC meeting amid rabid speculation about the future of Fed monetary policy. As it stands, the consensus view envisions a move to reduce asset purchases by $10 billion at the central bank’s September meeting. Price action over recent weeks suggests that rhetoric deviating from this status quo on the dovish side of the spectrum is likely to establish support for risky assets (stocks, cycle-linked commodities, high-yielding currencies) and precious metals while weighing on the US Dollar. Alternatively, this framework implies the opposite effect if a hawkish tone is detected.

In the event that the Fed confirms the status quo, a somewhat counter-intuitive dynamic may emerge. In fact, price action seen last Thursday, when headline news-flow seemingly supportive of a September cutback in asset purchases proved negative for risky assets and the US Dollar alike, may well have been a blueprint. About two-thirds of economists have now signed on to the $10 billion September taper scenario (according to surveys from Bloomberg and Reuters), meaning at least that much could already be priced into the FX space. Its confirmation may thus yield limited support for USD on the basis of reduced dilution risk associated with smaller-scale monthly liquidity injections.

That leaves the greenback to respond to secondary considerations. One of these may be the response of large-scale holders of US Treasury bonds – like China, for example – to the looming exit of a major buyer underpinning prices (obviously enough, the Fed). June’s TIC data showed a staggering $66.9 billion monthly capital outflow from long-term US paper (notably Treasury bonds). This amounted to the largest monthly decline since August 2007 and occurred against the backdrop of the first wave of taper-linked liquidation. That may mean that consensus-level “taper-on” rhetoric in today’s FOMC minutes could be interpreted in terms of ebbing demand for USD-denominated assets, sending the benchmark currency lower. Such Dollar weakness could translate into de-facto support for gold and silver even as crude oil and copperfollow shares downward.

CRUDE OIL TECHNICAL ANALYSIS – Prices pulled back after putting in a Bearish Engulfing candlestick pattern below resistance at the top of a Triangle chart pattern, a barrier reinforced by the 38.2% Fibonacci expansion at 108.40. Sellers are now testing Triangle support at 104.71, with a break beneath that initially exposing the 38.2% Fib retracement at 102.70. Alternatively, a reversal above 108.40 aims for the 50% expansion at 110.32. On balance, a Triangle is typically indicative of trend continuation, which in this case carries bullish implications, though confirmation is absent for now. 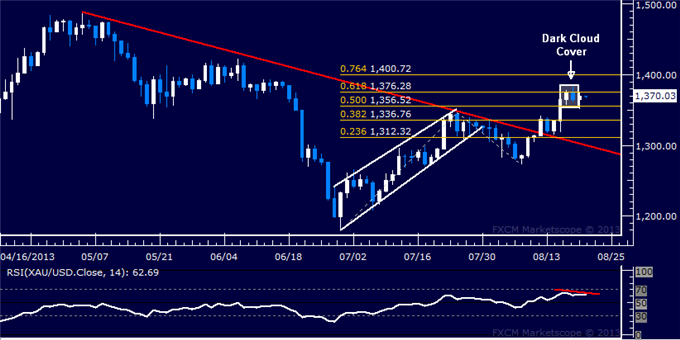 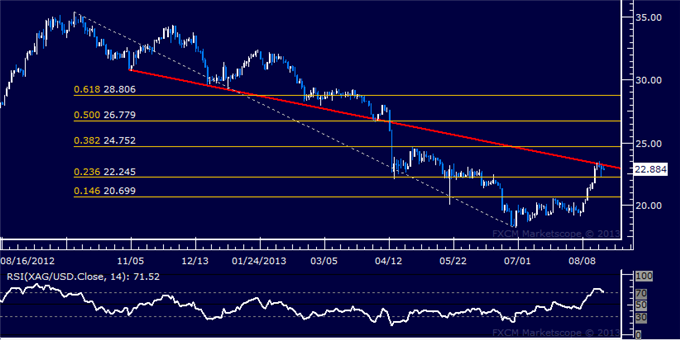 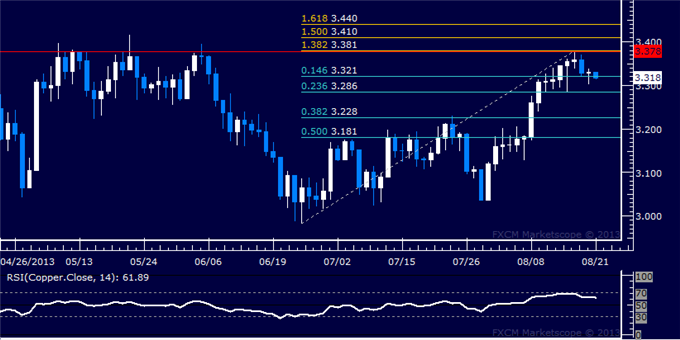