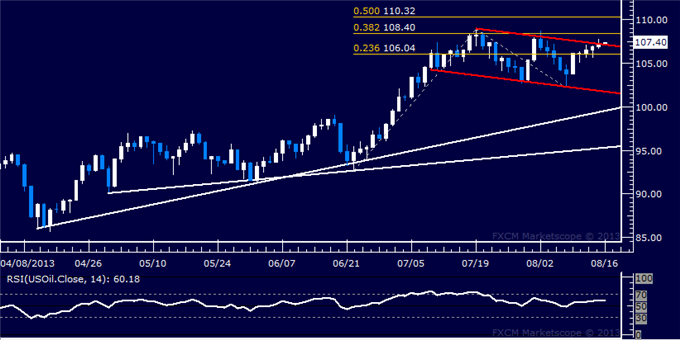 Gold Rallies Despite Fed QE Cutback Cues in US Data - Now What?

Gold prices shot higher despite US economic data boosting the case for a cutback in Fed QE efforts yesterday. The outlook going forward is clouded in uncertainty.

Commodity prices are treading water in the final hours of the week as markets look to the US economic calendar for direction cues. Yesterday’s news-flow produced somewhat puzzling results: July’s headline year-on-year CPI inflation rate rose in line with consensus forecasts while the weekly Jobless Claims data set surprised to the upside. On balance, these outcomes seemed to fall on the “pro-taper” side of the Fed policy expectations spectrum.

The S&P 500 responded as might have been expected, with the prospect of stimulus withdrawal sending the index to a five-week low. Performance in the commodities space was a somewhat counter-intuitive however. The typically sentiment-geared crude oil and copper prices nudged higher, breaking with the selloff on equity exchanges perhaps most surprisingly however, gold and silver prices shot aggressively higher. Needless to say that amounts to something of an oddity against for a pair of assets whose primary investment appeal is their anti-fiat properties.

This makes for a clouded outlook looking forward. The onus is once again on US data, with July’s Housing Starts and Building Permits figures as well as the preliminary estimate of Augusts’ University of Michigan Consumer Confidence gauge on tap. Improvements are expected all around, which ought to bolster the argument in favor of a tapering effort in September. What that means for commodity prices in the near term given the current environment is unclear however. For what it’s worth, US stock futures are pointing cautiously higher ahead of the opening bell on Wall Street, hinting at a risk-on mood to close to close out the trading week.

Crude Oil Technical Analysis (WTI)– Prices appear to be carving out a Flag chart pattern, indicative of downward correction preceding the resumption of the longer-term uptrend. A push above the 23.6% Fibonacci expansion at 106.04 has exposed the Flag top at the 107.00 figure, with a daily close above that targeting the 38.2% level at 108.40. Alternatively, a move back below 106.04 aims for the August 8 low at 102.21, followed by the Flag bottom at 101.88. 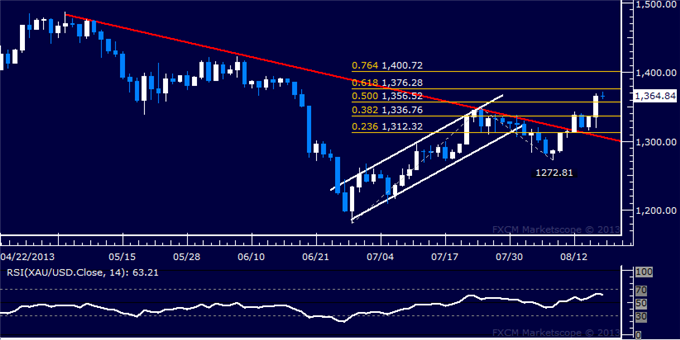 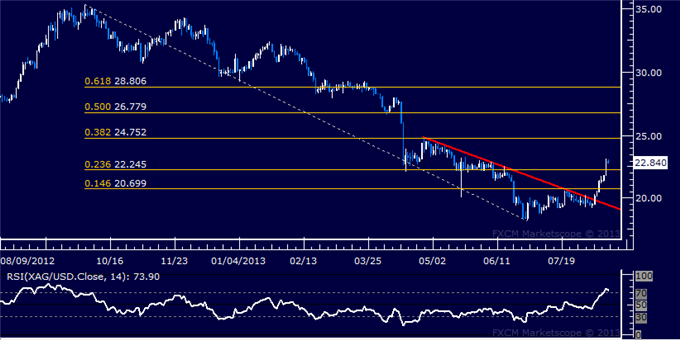 Copper Technical Analysis (COMEX E-Mini)–Prices are testing resistance at 3.387, the 50% Fibonacci retracement, with a break above that targeting the 61.8% level at 3.482. Near-term support is at 3.292, the 38.2% Fib, with a move back beneath that initially eyeing the top of a recently broken rising channel at 3.251. 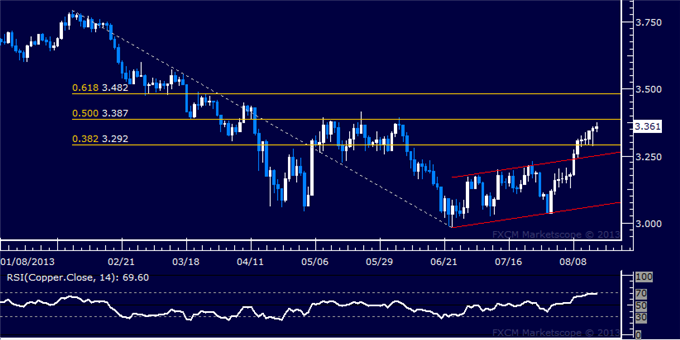