Commodity prices are trading water ahead of the opening bell on Wall Street as traders await the second half of the semi-annual Congressional testimony from Fed Chairman Ben Bernanke. The central bank chief spoke before the House of Representatives first and is due to face the Senate today. Bernanke was careful to stick closely to a familiar script yesterday, reiterating that the decision to taper asset purchases is dependent on incoming economic data and highlighting the difference between reducing QE and tightening monetary policy.

This time around, the prepared text ought to be effectively the samebut the Q&A session might generate some market-moving headlines. Anything that is perceived as advancing the case for a reduction in QE is likely to weigh on risk-sensitive crude oil and copper prices as well as eroding anti-fiat demand for gold and silver. Bernanke has seemingly gone out of his way to push back against the “taper”-driven volatility generated in the aftermath of June’s FOMC meeting however, suggesting that any discernible lean to be found in his remarks is more likely to be dovish than otherwise. Such a scenario is likely to bode well for sentiment-geared assets and precious metals alike. On balance, the baseline scenario is still for a neutral outing that fails to generate clear-cut directional cues in the immediate term.

Crude Oil Technical Analysis (WTI) - Prices put in a bearish Dark Cloud Cover candlestick pattern, hinting a move lower is ahead. Near-term support is at 103.93, the 23.6% Fibonacci retracement, with a break beneath that targeting the 38.2% level at 101.78. The bearish candle setup would be invalidated on a close above 107.41, the July 11 high.

Gold Technical Analysis (Spot) - Prices put in a Bearish Engulfing candlestick pattern below resistance at 1297.75, the 38.2% Fibonacci retracement, hinting a move lower is ahead. Near-term rising channel support is at 1260.04, a barrier reinforced by the 23.6% retracement at 1252.80. A break below that aims for Fib expansion support at 1228.00. Alternatively, a move above resistance sees the next upside boundary at 1334.08.

Silver Technical Analysis (Spot) - Prices are consolidating below resistance at 20.22. Near-term trend line support is at 19.18, with a break below that targeting the 23.6% Fibonacci expansion at 18.70. Alternatively, a break above resistance aims for the 38.2% Fib retracement at 20.73. 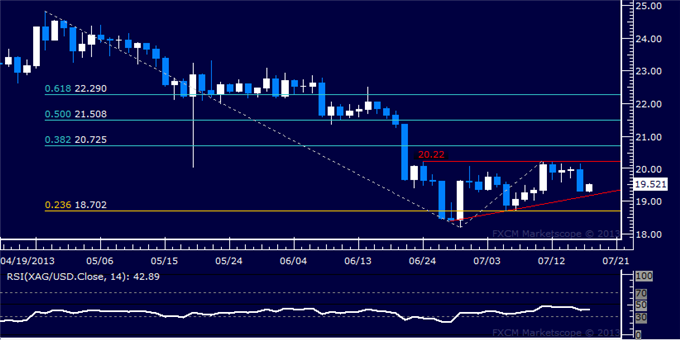 Copper Technical Analysis (COMEX E-Mini) - Prices are pulling back from resistance at the top of an emerging rising channel to approach support at 3.112, the 38.2% Fibonacci expansion. A break below that targets the channel bottom at 3.054 and the 50% level at 3.024. Resistance is reinforced by the 23.6% Fib at 3.221, with a reversal above that eyeing a horizontal pivot level at 3.270. 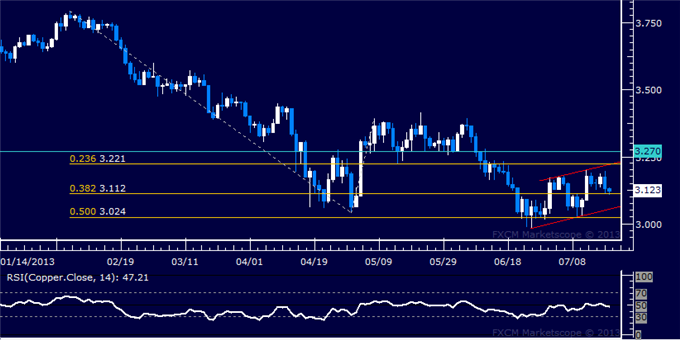