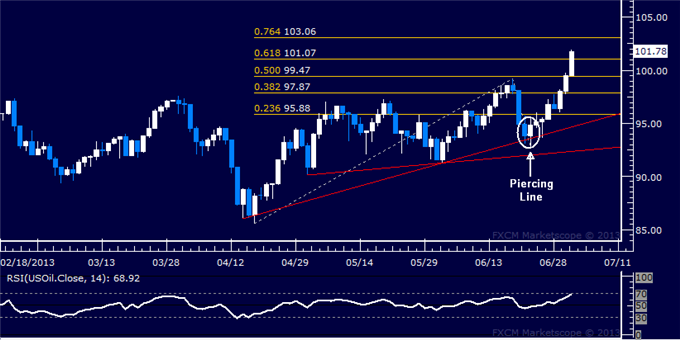 Crude oil prices surpassed the $100/barrel figure for the first time since September 2012 and surged to a 14-month high as tensions in Egypt continue to intensify.

Crude oil prices soared in overnight trade, breaching the $100/barrel level for the first time since mid-September of last year and pushing toward the $102.00 figure. The breakneck advance followed escalation of political turmoil in Egypt, where the threat of a violent struggle between the government and the military has grown after a defiant speech from embattled President Mohamed Morsi.

Rejecting an ultimatum from the generals to appease protesters’ demands or leave office, Morsi insisted he was the only legitimate leader of the country, adding he was prepared to defend that position with his life. The military soon responded in kind, pledging to “sacrifice even our blood for Egypt and its people”. That puts the two sides on a collision course toward a major violent confrontation, an outcome with as-yet unknown implications for region-wide stability and oil supply lines.

The situation remains in flux, with little besides the likelihood of volatility that can be surmised with any degree of certainty. Scheduled fundamental event risk is set to compound the situation as markets look to June’s ADP Employment data as well as the ISM Non-Manufacturing Composite gauge to set the tone for Friday’s closely-watched Nonfarm Payrolls print.

Investors continue to read US economic news-flow in terms of its implications for the timing and size of Federal Reserve stimulus reduction. As such, soft results may boost sentiment and cycle-sensitive copper prices. Gold and silver may likewise rise as downgraded QE “taper” bets underpin anti-fiat demand. While oil is already on the upswing, the prospect a delayed reduction in Fed support may amplify the push higher. Naturally, the markets remain highly vulnerable to headline risk and familiar policy outlook considerations may be swiftly abandoned if the geopolitical landscape warrants as much.

Crude Oil Technical Analysis (WTI)- An expected rebound from rising trend line support has aggressively accelerated, with prices testing above resistance at the 61.8% Fibonacci expansion (101.07) to target the 76.4% level (103.06). Near-term support is at the psychologically significant 100.00 figure, followed by the 50% Fib (99.47). 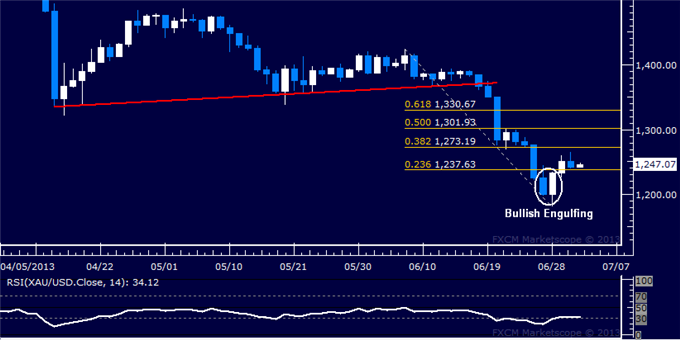 Silver Technical Analysis (Spot)- Prices put in a bullish Morning Star candlestick pattern, hinting a move higher is ahead. Initial resistance is at 19.76, the 23.6% Fibonacci retracement, with a break above that targeting the 38.2% level 20.73. Near-term support is at 18.19, the June 28 low. 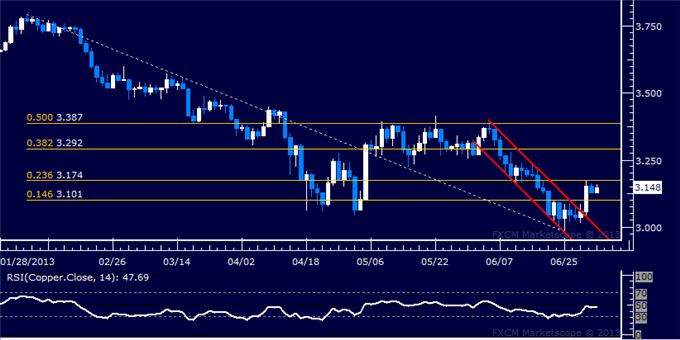