Crude oil is on the upswing while gold is under pressure in the wake an agreement on a bailout for Cyprus but the trends now on display may prove short-lived.

Crude oil is pushing higher along with Asian and European stock exchanges as risk appetite firms after Cyprus and the so-called “troika” (EU/ECB/IMF) agreed to measures paving the way for launch of the country’s bailout program. Gold and silver are trading lower as the apparent reduction in tail risk stemming from the agreement dents demand for alternative store-of-value assets. A lackluster response from the Euro hints not all is well however, warning that the optimism in the shares and commodities spaces may not prove lasting.

Forex traders’ lack of enthusiasm seems reasonable. The critical issue in for markets in following the Cyprus situation remains that of precedent for larger Eurozone countries, and the way in which the crisis has been managed does not seem to inspire a great deal of confidence. At best, depositors in Cypriot banking institutions now have to contend with capital controls locking up their money. At worst, they may lose as much as 40 percent of it.

This raises an important question: why should a depositor in any Eurozone country similarly vulnerable to a banking crisis expect to be unscathed if a Cyprus-like calamity were to occur there? If this expectation seems unreasonable in light of today’s events, said depositor (and many others) may well opt not to keep money in the Eurozone. This leaves markets waiting to see if a mass exodus of capital does indeed occur, for then the worst-case scenario will be upon the Eurozone whether or not Cyprus receives its aid.

Prices are testing resistance at 94.07, the March 19 swing high, with a break higher on a daily closing basis targeting 95.51. A break above that targets trend line resistance at 96.33. Near-term support is at 91.97, the 23.6% Fibonacci expansion. 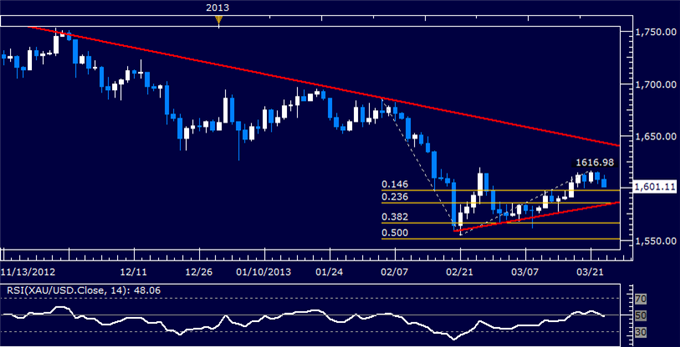 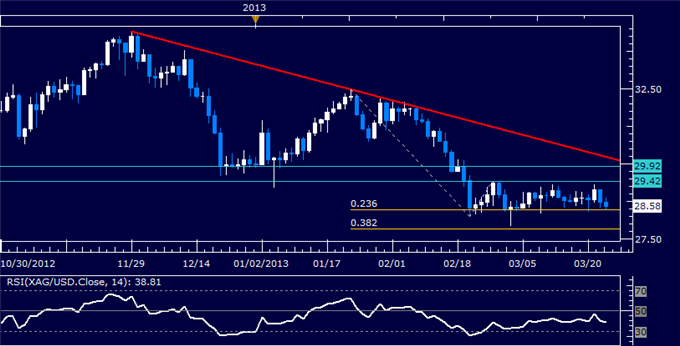 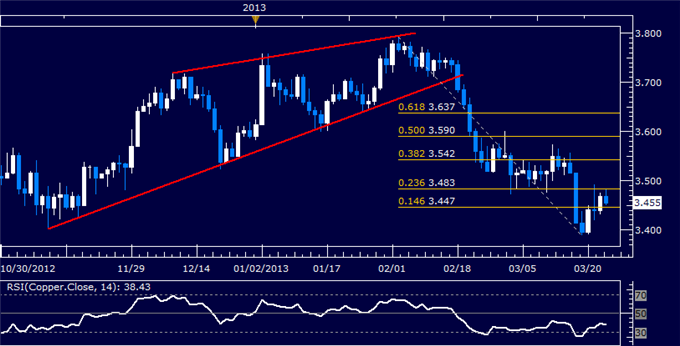