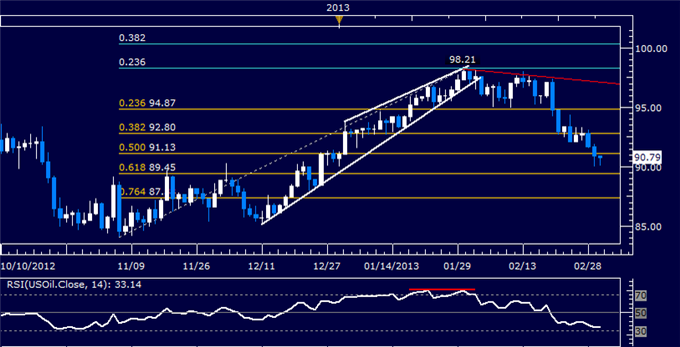 Crude oil and gold prices are looking to a meeting of Eurozone finance ministers for direction cues as Italian political instability continues to loom large.

Commodity prices are little-changed in European trade as S&P 500 futures recover from steep losses recorded in early overnight trade, hinting sentiment is finding its footing after a China-driven burst of risk aversion to start the week. Cycle-sensitive crude oil and copper prices have recovered to trade effectively flat having been down as much as 0.7 and 0.9 percent just a few hours earlier.

Looking ahead, all eyes are on the Eurozone Finance Ministers meeting set to begin in Brussels. The sit-down is expected to be followed by press conferences from recently installed Eurogroup head Jeroen Dijsselbloem, EU Economic Affairs Commissioner Olli Rehn and ESM chief Klaus Regling. Needless to say, traders will be acutely focused on any remarks regarding Italian political instability in the wake of the inconclusive general election outcome.

On balance, supportive remarks may add fuel to recovering risk appetite, pushing shares higher along with crude oil and copper. Endorsing a specific outcome publicly may be counter-productive however considering much of the current deadlock in Italy follows from widespread protest voting against austerity imposed by the EU-sponsored government of Mario Monti. With that in mind, the so-called “Eurogroup” may hold off on specifics, allowing the slide toward new elections already making the rounds across the newswires to continue. That may limit the near-term upside in the risk space.

Meanwhile, gold and silver are treading water and waiting for the next catalyst to spark directional momentum. A nearly empty US economic calendar offers little to inform the Fed stimulus outlook. That puts the Eurozone summit in focus again, playing to precious metals’ allure at times when a credible threat to the soundness of financial markets emerges. With that in mind, a lack of decisive language on Italy may reboot sovereign stability fears and push gold and silver higher. 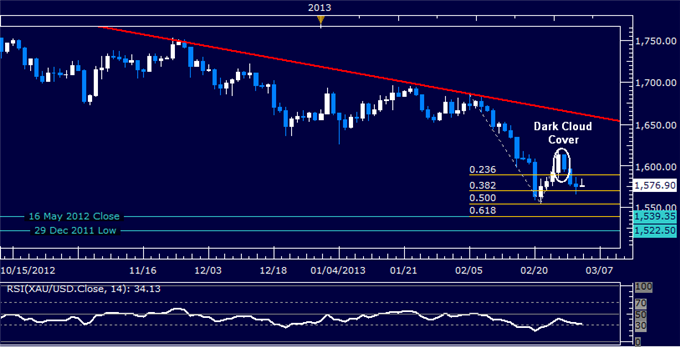 Prices are testing below support at 28.46, the 23.6% Fibonacci expansion, having put in a bearish Dark Cloud Cover candlestick pattern below resistance marked by the June 6 close at 29.42. A confirmed break downward exposes the 38.2% level at 27.86. 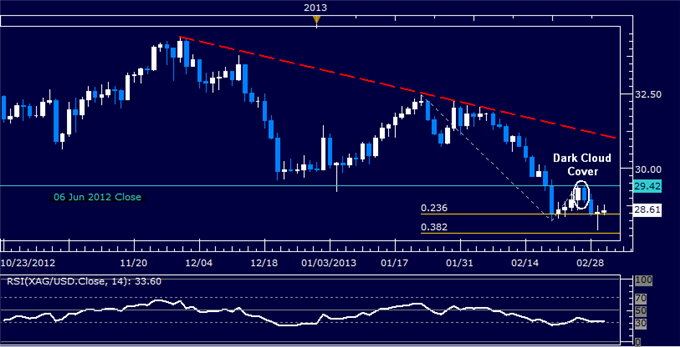 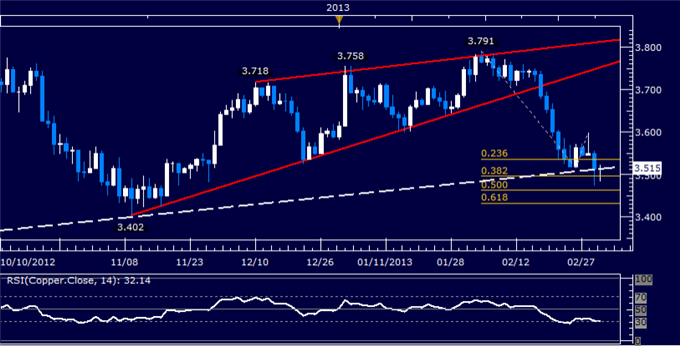