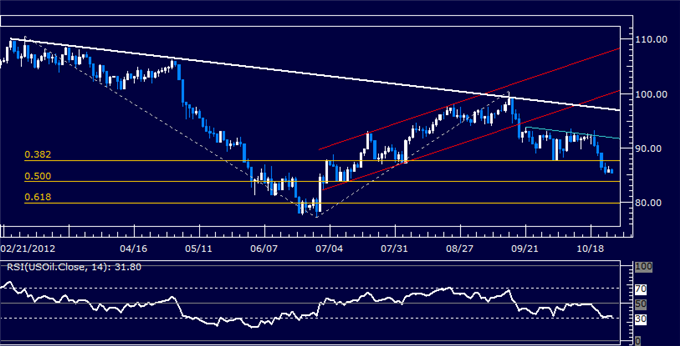 Commodities: Crude Oil, Metals May Rebound on US GDP Data

Commodities are under pressure amid risk aversion across financial markets but a pickup in third-quarter US GDP may offer prices a lifeline.

Commodities are under pressure ahead of the opening bell on Wall Street as traders react to a disappointing earnings report from Apple Inc released overnight. The world’s largest company by market value reported profits rose $8.67/share in the fiscal fourth quarter, trailing analysts’ estimates calling for an $8.75/share result, and slashed its guidance. S&P 500 index futures are pointing sharply lower, arguing for more of the same through the end of the trading week.

Third-quarter US GDP figures may help offset negativity however. Expectations call an increase of 1.8 percent, marking acceleration from the 1.3 percent recorded in the three months through June. The pickup may stoke hopes that firming growth in the world’s top economy is becoming better able to offset sluggish performance in Asia and a recession in Europe.

Such an outcome stands to boost growth-anchored crude oil and copper prices. Meanwhile, gold and silvermay likewise rise as recovering sentiment dents haven demand for the US Dollar, although the greenback’s losses are likely to be relatively modest considering a strong GDP print would dent hopes for expanded Federal Reserve stimulus.

Prices continue to push lower as expected after taking out support at 87.66, the 38.2% Fibonacci expansion. Sellers continue to take aim at the 50% level at 83.76, with a break below that exposing the 61.8% Fib at 79.84. The 87.66 mark has been recast as near-term resistance. A reversal back above that targets the psychologically significant 90.00 figure and a falling trend line set from late September, now at 91.78.

Prices put in a Bullish Engulfing candlestick pattern above support at 1693.06, the 38.2% Fibonacci retracement, hinting a bounce may be ahead. Initial resistance lines up at a falling trend line set from the October 5 swing high (1723.12). A break above that exposes the 1732.33-35.65 area, marked by a horizontal pivot level and the 23.6% Fib. Alternatively, a reversal below support targets the 50% level at 1661.32. 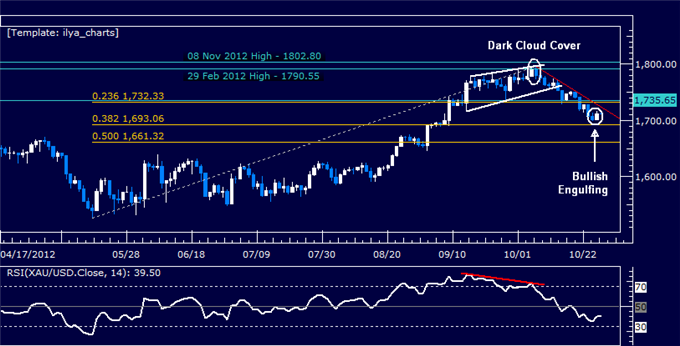 Prices are inching lower as expected after completing a Bearish Engulfing candlestick pattern coupled with negative RSI divergence below the 35.00 figure. Sellers have now taken out support at 32.36, the 38.2% Fibonacci retracement, exposing the 50% level at 31.43. A push below that aims for the 61.8% Fib at 30.50. The 32.36 level has been recast as resistance, with a break above that the 33.51-66 area. 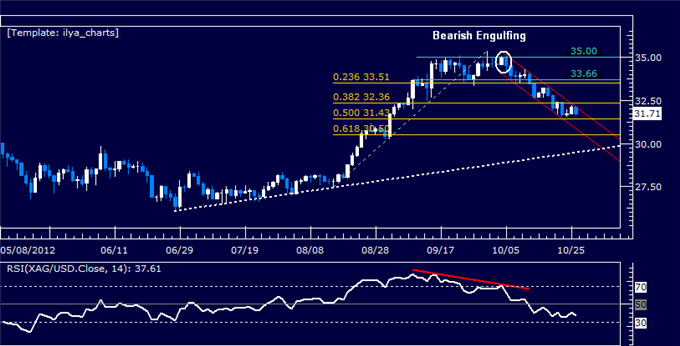 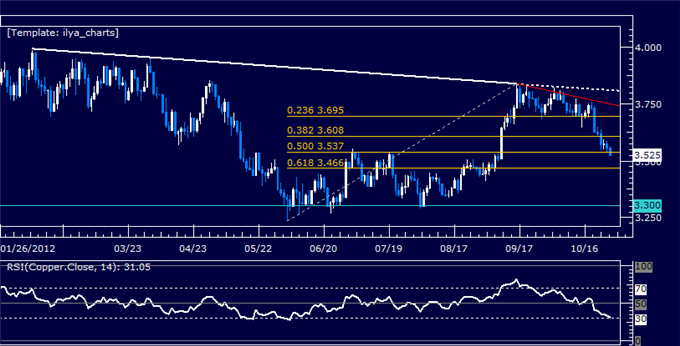