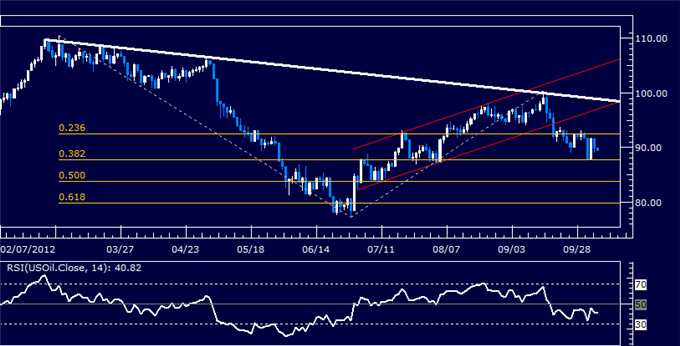 Commodities at Risk with Eurozone FinMin Summit, IMF Outlook Ahead

Commodity prices look to a meeting of Eurozone finance ministers and an updated IMF world economic outlook for direction, with weakness seeming likely.

Commodities are likely to find themselves at the mercy of broad-based risk sentiment trends to start the trading week as all eyes turn to the Luxembourg, where Eurozone finance ministers are due to begin a two-day meeting to discuss debt management efforts. Traders will be interested in any moves to mend disagreements between the Greek government and troika monitors that open the door for disbursement of the latest batch of bailout funding. Any clues about the timing of a Spanish request for a full-on rescue package are also sought, particularly after borrowing costs rose at a bond auction last week.

Markets already appear jittery ahead of the sit-down. Sentiment-anchored crude oil and copper prices are following Asian stocks lower while gold and silver succumb to de-facto selling pressure as safe-haven demand buoys the US Dollar. The final communiqué from the meeting will not be available until the second day of talks concludes tomorrow but investors will pay close attention to sideline commentary today for clues about the tone and trajectory of the proceedings. Against this backdrop, the IMF is due to release an updated set of global economic performance expectations, with downgrades widely expected. This suggests that absent concrete positive cues from Luxembourg, the risk-off mood is likely to carry forward.

A burst of seesaw volatility has left prices locked between support at 87.70 and resistance at 92.56, the 38.2% and 23.6% Fibonacci expansions respectively. A break above resistance exposes the underside of a rising channel set from early July, now at 97.03. Alternatively, a drop through support targets the 50% expansion at 83.76.

Prices put in a bearish Dark Cloud Cover candlestick pattern below resistance in the 1790.55-1802.80 area, hinting a move lower is ahead. Negative RSI divergence reinforces the case for a downside scenario. Sellers are now probing below rising trend line support set from mid-August, with a confirmed break on a daily closing basis exposing the 23.6% Fibonacci retracement at 1747.20. Alternatively, a break above resistance targets 1850.00 and the 1900/oz figure. 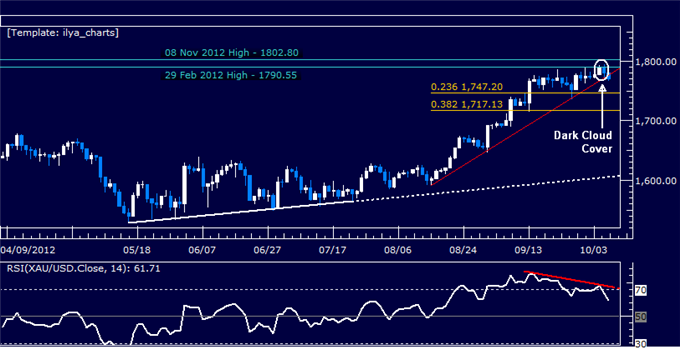 Prices completed a Bearish Engulfing candlestick pattern, hinting a move lower is ahead. Negative RSI divergence reinforces the case for a downside scenario. A confirmed break below rising trend line support (34.04) on a daily closing basis initially exposes the 23.6% Fibonacci retracement at 33.19. Near-term resistance stands at the 35.00 figure. 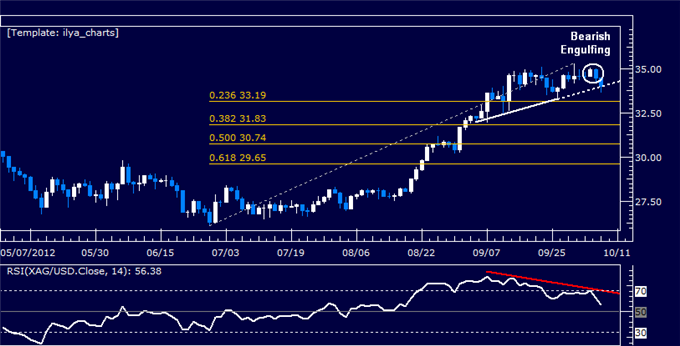 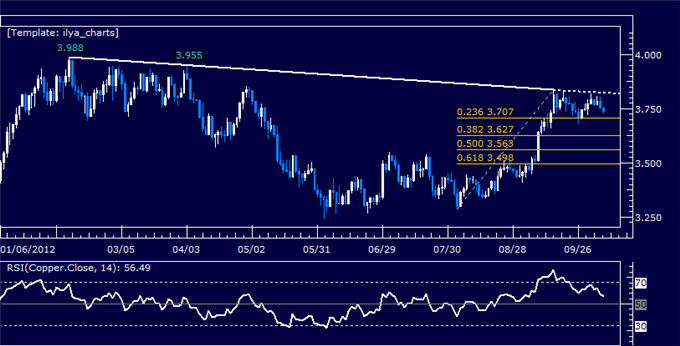