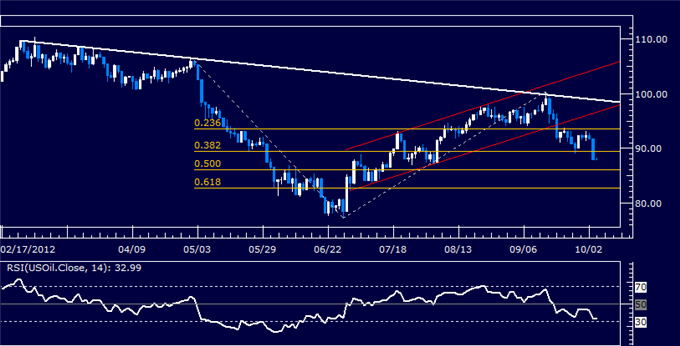 Commodities Rise on US Data - Will the ECB Snuff the Rally?

Commodity prices are edging higher overnight as risk appetite firms across Asian bourses following a supportive set of US economic data. Sentiment-linked crude oil and copper prices followed shares higher while gold and silver found de-facto support in waning haven demand for the US Dollar. S&P 500 index futures are pointing firmly higher, hinting at more of the same ahead.

A report from ADP showed the US private sector added 162,000 jobs in September, topping expectations for a 140,000 increase. Meanwhile, the ISM Non-Manufacturing Composite gauge revealed that service-sector activity unexpectedly accelerated, growing at the fastest pace in six months. The reports helped buoy hopes that a firming recovery in the US will help offset a recession in Europe.

From here, all eyes are on the ECB monetary policy announcement. The growth slump in the Eurozone – which cumulatively accounts for close to a quarter of total global output – represents the most significant headwind to worldwide growth this year.

Priced-in expectations suggest policymakers will keep the monetary policy mix unchanged this time around. A spike in CPI and PPI inflation in September reinforces the likelihood of such a scenario. Still, traders will be keenly interested in any guidance on future growth-supportive efforts. The absence of anything along these lines may prove weigh on risk appetite and cut short commodities’ advance.

Later in the day, the spotlight shifts to the Federal Reserve as the central bank releases minutes from September’s seminal FOMC meeting. Markets will scour the report in an attempt to establish the precise triggers for the Fed’s launch of QE3 and glean any insight on what conditions will need to be met for the program to be wound down. 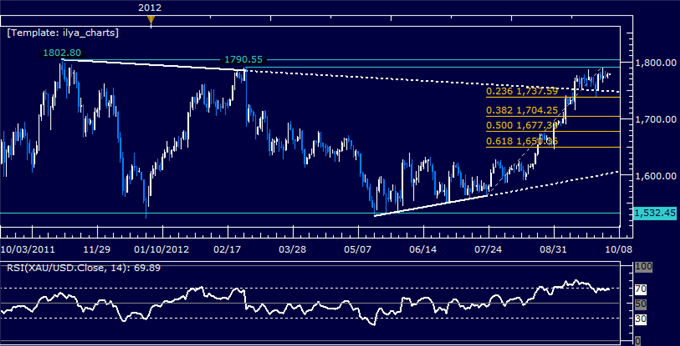 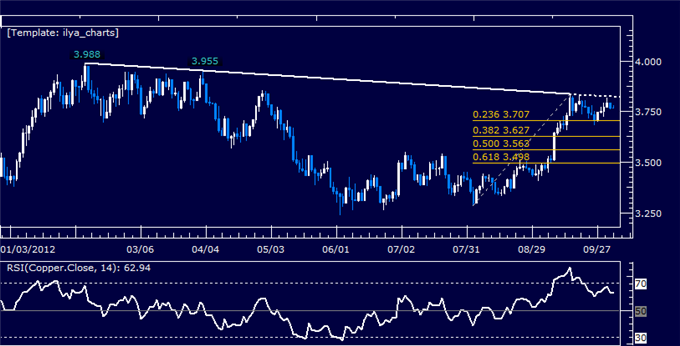