Commodity prices scored broad-based gains on Friday as traders interpreted Fed Chairman Ben Bernanke’s speech at the Jackson Hole Symposium to be opening the door for a third round of quantitative easing (QE3). While Bernanke did not give explicit guidance, the central theme of his remarks appeared to center on the idea that nonstandard monetary stimulus measures helped the recovery and appeared to have been worthwhile given the trade-off between their various costs and benefits. The central bank chief concluded with what can be interpreted as a nod toward more accommodation, saying it is “important to achieve further progress” in supporting economic growth and foster job creation and adding that the Fed will provide additional help “as needed”.

On balance, this is likely to make for a highly data-dependent environment in the days ahead as markets gauge if further stimulus is indeed “needed”, with Friday’s US Employment report of particular interest given Bernanke’s focus labor markets. Expectations call for a slight slowdown in job-creation in August, with payrolls yielding a 125,000 increase compared with the 163,000 result in July. Expectations of such an outcome may offer continued support for QE3 expectations, boosting growth-sensitive crude oil and copper prices and driving inflation-hedge demand for gold and silver (though it ought to be noted that US data has performed better relative to expectations lately). The coming 24 hours are likely to be fairly quiet however with Wall Street offline and commodity trading on US futures exchanges closing early for the Labor Day holiday. 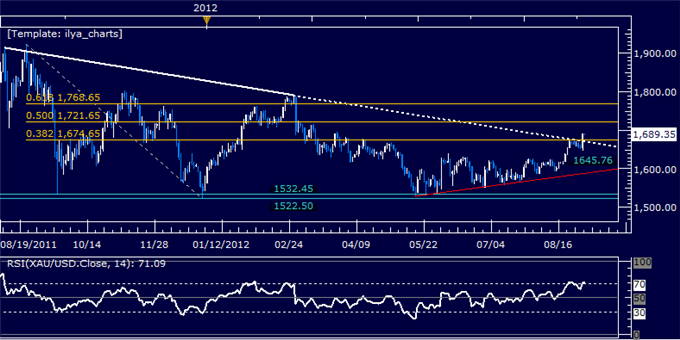 Prices punched through key trend-defining trend line resistance established from late-April 2011 to challenge the 50% Fibonacci retracement at 31.79. A break above this boundary targets the 32.93-33.14 area marked by a horizontal pivot level and the 61.8% Fib. The trend line – now at 30.83 – has been recast as near-term support and is reinforced by the 38.2% retracement at 30.45. A break beneath the latter level exposes the 30.00 figure and 29.70. 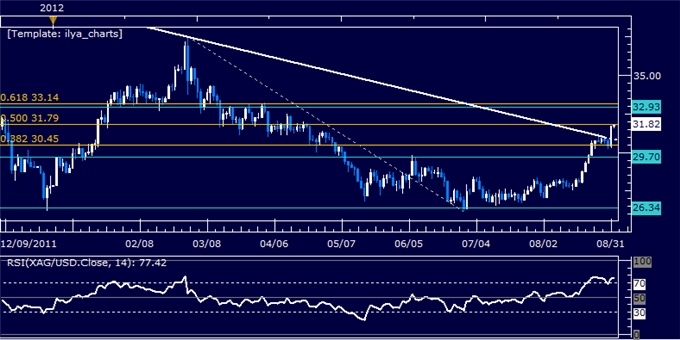 Prices rebounded as expected after putting in an Inverted Hammer candle above support at 3.438. Near-term resistance lines up at 3.535, marked by a range top in place since late May, with a break above that targeting the upper boundary of a rising channel set from the August 2 low (3.545) and 3.618. Alternatively, a break below support exposes the channel bottom, now at 3.410. 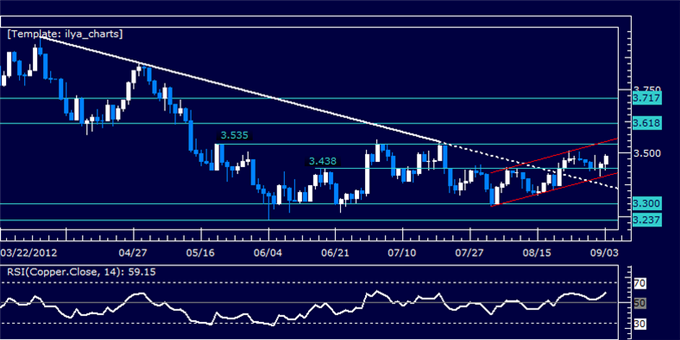