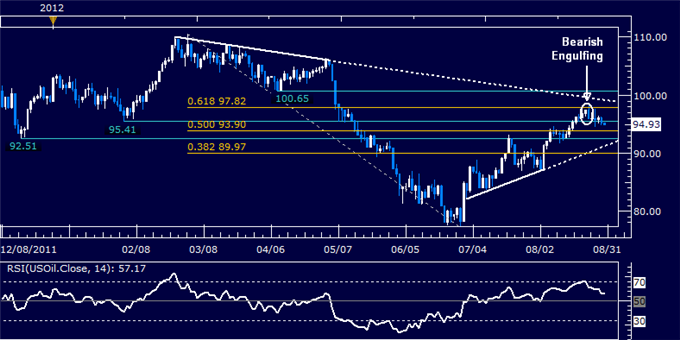 Commodities continue to hover near familiar technical barriers as traders wait for Friday’s much-anticipated speech from Fed Chairman Ben Bernanke at the Jackson Hole symposium. Traders hope the central bank chief will signal the intention of launching a third round of quantitative easing (QE3). Crude oil and gold took an initial step lower, the former undermined as Hurricane Isaac seemingly left Gulf refining capacity effectively unscathed and the latter pressured as a firmer tone in the Fed’s Beige Book survey undermined stimulus bets. Significant follow-through seems unlikely for now however, with investors waiting for Bernanke’s remarks to commit to a directional bias.

In the meantime, the spotlight turns to July’s US Personal Spending and Income figures as well as Augusts’ Kansas City Fed Manufacturing Activity gauge. Income is expected to rise 0.3 percent, in line with its 12-month average, but Spending is seen yielding the largest increase in five months at 0.5 percent. Meanwhile, the Kansas City Fed print is forecast to edge narrowly lower. Traders will evaluate the data in terms of setting the stage for Jackson Hole, with a net positive tone underscoring the recent improvement in US economic data anddenting stimulus bets further. Such an outcome stands to put downward pressure on growth-linked crude oil and copper prices while gold and silver edge lower on receding inflation-hedge demand. Needless to say, a softer data set is likely to produce the opposite results.

Prices edged lower through support at 95.41, the February 2 low, after completing a Bearish Engulfing candlestick pattern below resistance at the 61.8% Fibonacci retracement (97.82). Sellers now aim to target the 50% Fib at 93.90, with a break below that targeting 92.51. The 95.41 level has been recast as resistance, with a break back above that exposing 97.82 anew.

Prices edged lower putting in a Doji candlestick below trend-defining resistance at a falling trend line set from the August 23 2011 swing high, taking out initial support is at the 50% Fibonacci retracement (1658.55). Sellers now aim to challenge the 38.2% level at 1627.46. The 1658.55 level has been recast as resistance, with a break above that opening the door for test of trend line resistance now at 1668.89. 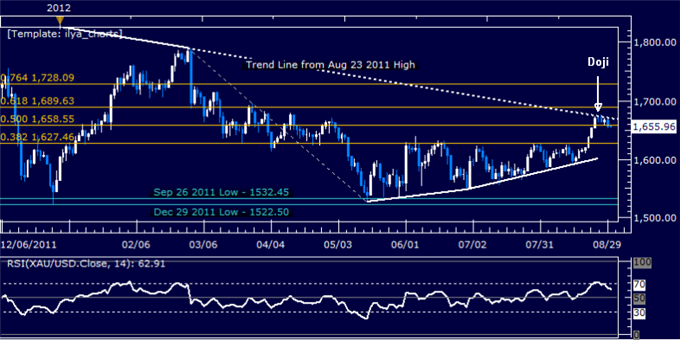 Prices continue to stall below trend-defining trend line resistance set from the late-April 2011 swing top (30.96). Near-term support lines up at 29.70. Alternatively, a break above resistance marks a significant reversal and initially exposes the 32.00 figure and a horizontal pivot at 32.93. 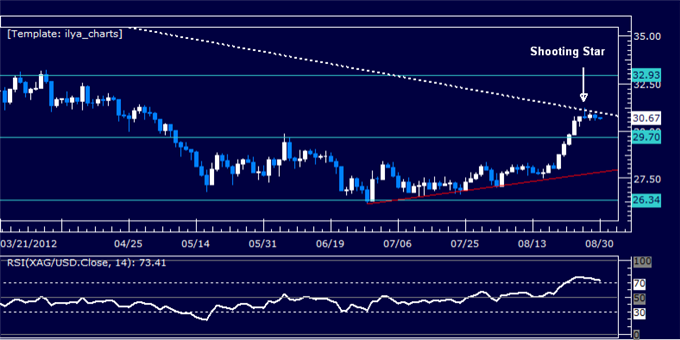 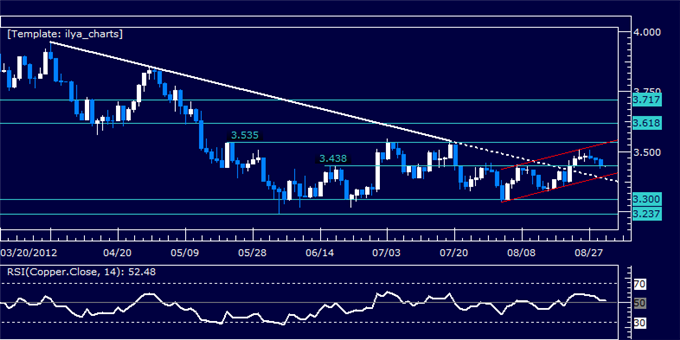