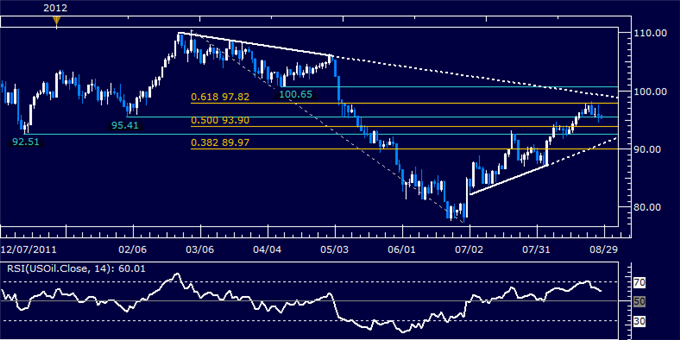 Crude oil is pushing higher ahead of the opening bell on Wall Street amid reports that tropical storm Isaac is on the verge of being classified as a full-blown hurricane as it nears landfall along the northern Gulf coast, threatening refineries that account for close to 40 percent of US processing capacity.

Gold and silver are little changed, waiting for clues on the likelihood of additional Fed stimulus from the US economic calendar as markets gear up for Friday’s closely-watched speech from Ben Bernanke at the Jackson Hole central bankers’ symposium. Augusts’ Richmond Fed Manufacturing Activity gauge and Consumer Confidence reading are on tap, with narrow improvements expected on both fronts.

Stronger outcomes stand to weigh on precious metals while compounding risk aversion (and thereby encouraging copper lower), reminding the markets of the recent improvement in US economic data and denting hopes for a near-term QE3 announcement. It is unclear whether crude oil would follow downward in such a scenario however given lingering supply jitters.

Prices are consolidating between resistance at 97.82, the 61.8% Fibonacci retracement, and support at 95.41, the February 2 low. A break downward initially targets the 50% Fib at 93.90. Alternatively, a push higher through resistance exposes a falling trend line set from the late-February swing top, now at 99.21.

Prices edged lower as expected after putting in a Doji candlestick below trend-defining resistance at a falling trend line set from the August 23 2011 swing high. Initial support remains at 1658.55, the 50% Fibonacci retracement, with a break below that targeting the 38.2% level at 1627.46. Trend line resistance is now at 1670.81, with a break above that on a daily closing basis exposing the 61.8% retracement at 1689.63 and the 1700/oz figure. 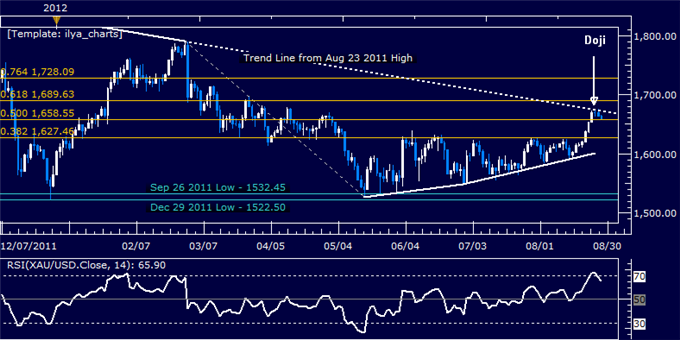 Prices put in a Shooting Star candlestick below trend-defining falling trend line resistance set from the late-April 2011 swing top (31.04), hinting a move lower is ahead. Near-term support lines up at 29.70. Alternatively, a break above resistance marks a significant reversal and initially exposes the 32.00 figure and a horizontal pivot at 32.93. 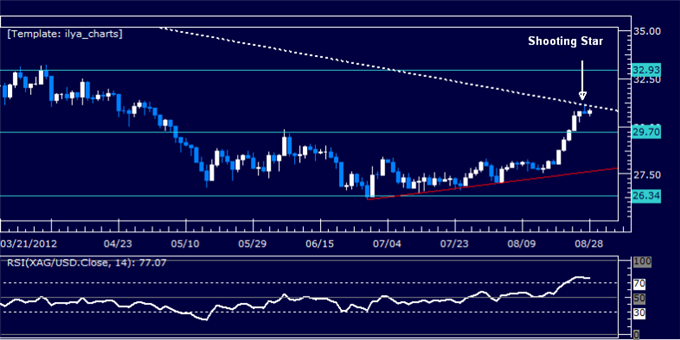 Prices are pulling back following a test of resistance at the top of a rising channel set from the August 2 low. Near-term support lines up at 3.442, with a break below that exposing the intersection of the channel bottom and a falling trend line set from the April 3 high (3.391). Channel resistance is now at 3.524, a hurdle reinforced by a range top at 3.535. A push above the latter level exposes 3.618. 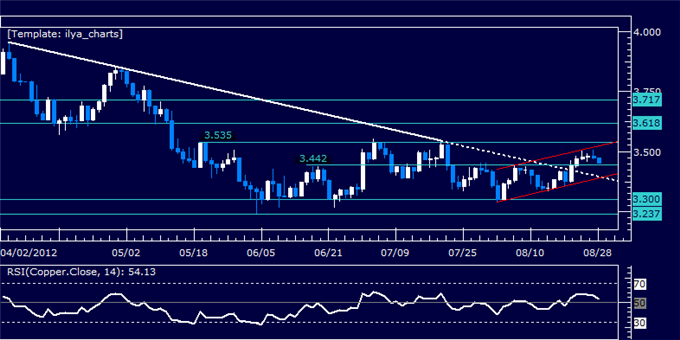