Growth-sensitive crude oil and copper prices are following stocks lower in European trade in the wake of disappointing Japanese Trade Balance figures. The report showed exports fell at an annual pace of 8.1 percent in July, marking the largest drop in six months. Japan is the world’s fourth-largest exporter and markets appear to have interpreted the sharp decline in overseas sales in terms of its implications for slowing global demand.

While risk aversion would typically be expected to boost demand for the safe-haven US Dollar and thereby extend selling pressure to gold and silver, the precious metals holding their own this time around. Support comes courtesy of speculation about Federal Reserve QE3 as markets gear up for the release of minutes from Augusts’ FOMC meeting. Investors will pick apart the text for clues about the possibility of more stimulus being unveiled in the coming weeks, either at the Jackson Hole symposium on August 31 or policymakers’ next sit-down in mid-September.

S&P 500 stock index futures are pointing firmly lower, hinting the risk-off mood is likely to carry forward as Wall Street comes online. This suggests oil and copper are likely to remain under pressure for now, although a dovish lean from Fed officials is likely to boost sentiment and force a recovery. Needless to say, such a result would add fuel to gold and silver’s upward push. On the other hand, a set of minutes that doesn’t materially advance the case for further accommodation may prove disappointing, forcing the anti-fiat metals to play catch-up to the downside.

Prices are testing resistance at 97.82, the 61.8% Fibonacci retracement, with a break higher exposing a falling trend line set from the late-February swing top now at 99.30. This barrier is reinforced by the psychologically significant $100/barrel figure. Near-term support is at 95.41, the February 2 low, with a drop back below that targeting the 50% Fib at 93.90.

Prices breached key resistance in the 1620.45-35.70 congestion area, exposing a major falling trend set from the August 23 2011 peak, now at 1664.47, as the next upside objective. A break above this barrier would mark a significant bullish trend development and initially open the door for a challenge of 1680.00. The 1620.45-35.70 area has been recast as near-term support. 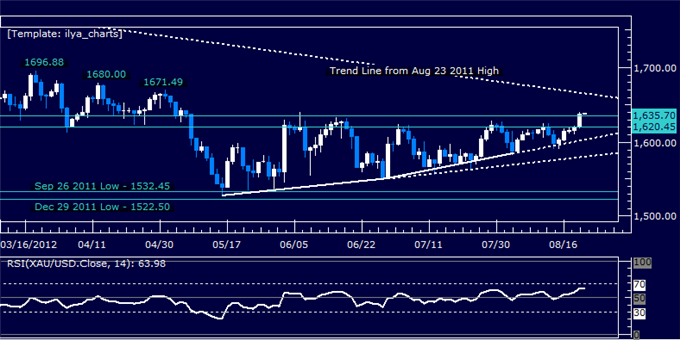 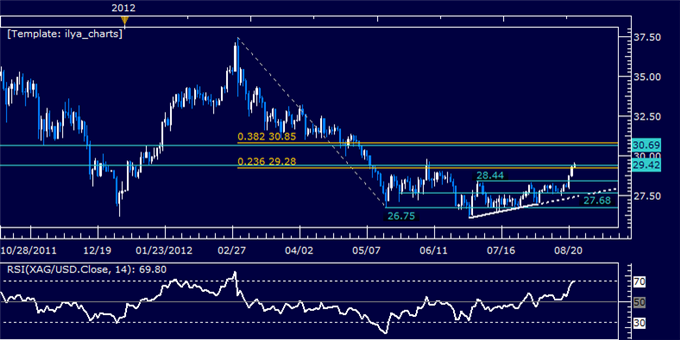 Prices broke resistance at a falling trend line set from the April 3 high to challenge a horizontal barrier at 3.442, with a break above that exposing 3.535. The trend line, now at 3.416, has been recast as near-term support. A move back below that aims for a shorter-term rising line set from the August 2 low, now at 3.365.