Gold May Rise on US Data, Crude Oil and Copper Outlook Clouded

All eyes are on the US economic calendar, with the spotlight will shift to the US Empire Manufacturing gauge of factory-sector performance in New York State. The reading marks the first data point in the August batch of regional activity surveys and will help gauge the degree of follow-through on the apparent pickup in pace of the US recovery in July. Expectations point to a narrow pullback to 7.0 after a print at 7.39 in the prior month.

The markets’ response following yesterday’s US Retail Sales figures suggests a softer print is likely to be interpreted in terms of increasing Fed stimulus bets, weighing on the US Dollar while boosting gold and silver as alternative stores of value. An expected drop in the annualized CPI reading to 1.6 percent – the lowest in 17 months – would reinforce this dynamic.

The implications for overall risk appetite, and thereby sentiment-sensitive crude oil and copper prices, are less defined however.Markets appear to remain undecided on whether to read softer US economic data as risk-negative (in terms of growth) or risk-positive (in terms of stimulus expectations). Needless to say, the inverse can be said of interpreting stronger data. A tilt toward the policy outlook side of the equation can be expected to emerge as the late-August Jackson Hole central banker summit approaches.

Prices continue to stall at resistance in the 93.21-90 area marked by the July 19 high and the 50% Fibonacci retracement. Near-term support remains at the psychologically significant 90.00 figure, a barrier is reinforced by the 38.2% retracement at 89.87. A break below the latter level exposes a rising trend line set from early July, now at 88.81. Alternatively, a push above resistance initially targets the 61.8% Fib at 97.82.

Prices continue to drift below resistance in the 1620.45-35.70 congestion area. Near-term support remains at a rising trend line support set from late June, now at 1596.24. A break below this boundary exposes a longer-term trend line established from the May 16 bottom, currently at 1576.02. Alternatively, a push above resistance initially targets 1677.79, the May 1 swing high. 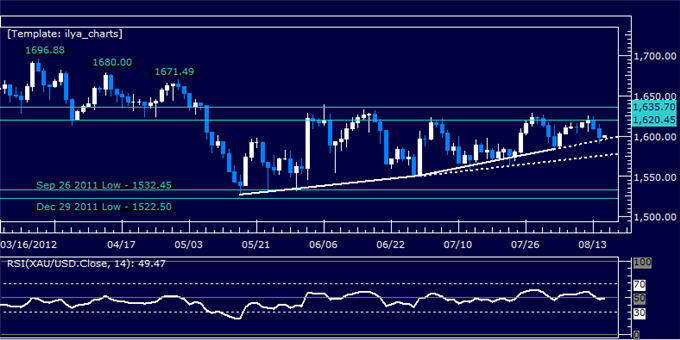 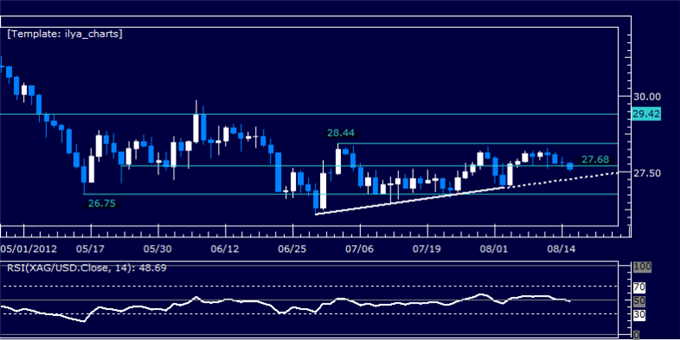 Prices broke through support at 3.387 after recoiling from resistance at a falling trend line set from the April 3 high. Sellers now aim to challenge the 3.000-332 area. The 3.387 level has been recast as near-term resistance, with a break above that targeting the trend line, now at 3.429.