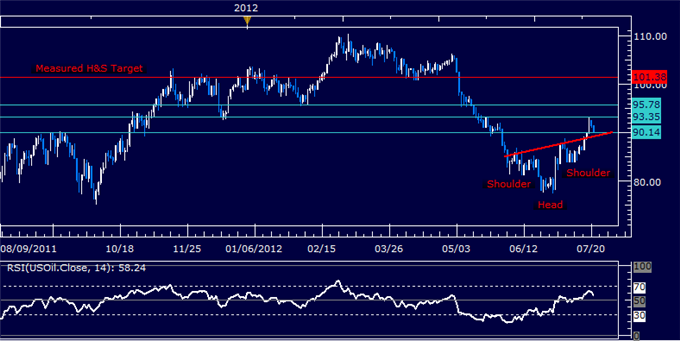 Commodity prices are trading broadly lower, extending a rout that began in Asia amid worries about slowing Asian economic growth and rebuilding Eurozone debt crisis fears. Sentiment-geared crude oil and copper prices are following stocks lower while gold and silver are facing de-facto selling pressure as haven flows pour back into the US Dollar.

On the European front, German Vice Chancellor Philipp Roesler said he was “very skeptical” about Greece’s rescue and warned the country would not get further aid if it fails to meet its obligations. He also noted that the Greece may accept the “wisdom” of exiting the Eurozone if aid terms fail, adding that such a possibility has “lost its terror”. Reports claiming several Spanish regions may follow Valencia in asking for a government bailout also circulated.

S&P 500 stock index futures are pointing sharply lower, warning of continued risk aversion ahead. The Chicago Fed National Activity Index amounts to the only bit of noteworthy event risk on the economic calendar. Traders are likely to interpret the outcome through the prism of QE3 probability, with a softer outcome offering a possible counter-balance to anti-risk momentum by stoking stimulus hopes.

Prices appear to have completed a bullish Head and Shoulders (H&S) bottom chart pattern, implying a forthcoming advance to a measured target of 101.38. Prices are pulling back to retest 90.14, a familiar barrier reinforced by the H&S neckline (currently at 89.25) now recast as support. A daily close below the latter boundary invalidates bullish implications of overall positioning and initially exposes the July 3 closing high at 87.65. Near-term resistance is at 93.35. 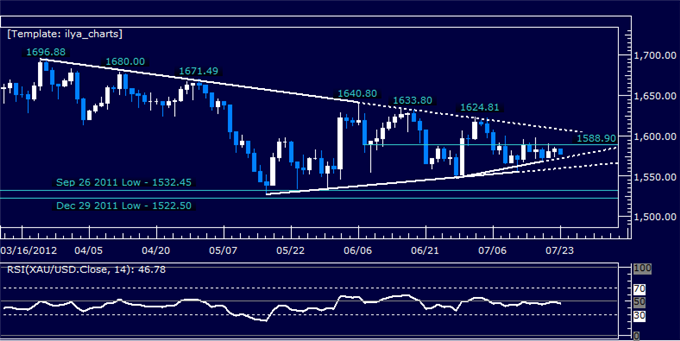 Prices continue to tread water above support is at 26.75. A break below that exposes the multi-month triple bottom at 26.05. Trend line resistance is now at 27.51, with a breach above that exposing the July 3 high at 28.44.

Prices are continuing lower after breaking through support at a rising channel bottom set from late June to form a Bearish Engulfing candlestick pattern. Sellers are now probing through the 23.6% Fibonacci expansion at 3.378, with a confirmed breach exposing the 38.2% level at 3.268. Near-term resistance is at 3.445, the 14.6% Fib. 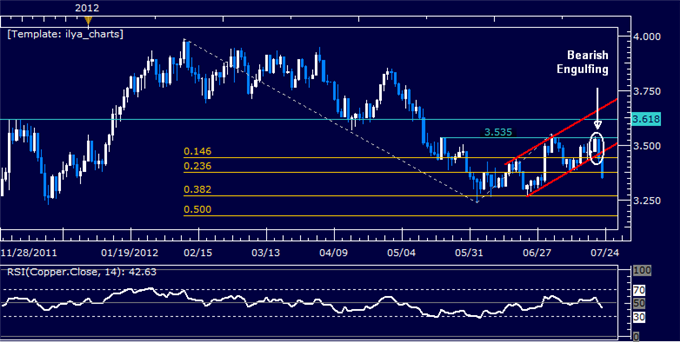