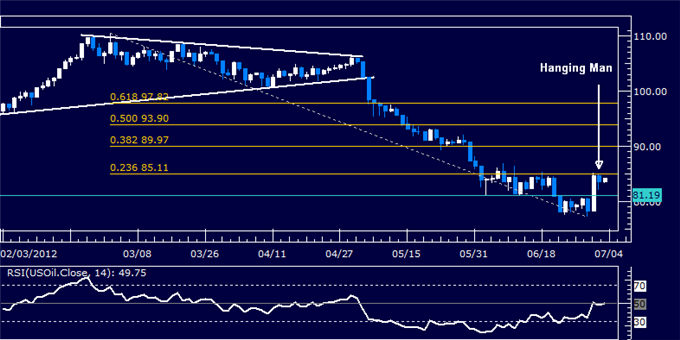 Commodity prices are trading broadly higher amid a pickup in risk appetite as markets revel in hopes that central banks across the globe will ease monetary policy. Growth-linked crude oil and copper prices are following stocks higher. Gold and silver advanced on the back of rising demand for precious metals as an inflation hedge in the event that a further loosening of monetary policies unleashes runaway price growth.

Unexpectedly weak UK Construction PMI and Eurozone PPI figures reinforced expectations that the Bank of England will expand asset purchases by another £50 billion while the European Central Bank cuts its benchmark lending rate to a record-low 0.75 percent when both unveil their monthly policy announcements later this week. Meanwhile, former Federal Reserve Vice Chairman Alan Blinder helped stoke bets on further US easing, saying the recent run of poor economic data is “strengthening the positions of the doves” on the central bank’s rate-setting committee in an interview with Bloomberg News. Finally, an editorial in the China Securities Journal said the “time was ripe” for the PBoC to cut rates further.

Looking ahead, the durability of the risk-on tone appears vulnerable heading into the opening bell on Wall Street. S&P 500 stock index futures are notably treading water, hinting the markets aren’t quite prepared to fully commit to a pro-risk disposition. US Factory Orders data headlines the economic calendar, with expectations calling for a 0.1 percent increase in May to snap a two-month losing streak. Considering that the latest round of expectant dreaming about stimulus possibilities was triggered by a dismal ISM Manufacturing print, a decently firm data point may counter-intuitively snuff risk appetite.

Prices are testing resistance at 85.11, the 23.6% Fibonacci retracement, with a break higher exposing the 38.2% level at 89.97 (a barrier reinforced by the psychologically significant 90.00 figure). A Hanging Man candlestick points to indecision and warns a downswing may be ahead. Near-term support lines up at 81.19, with a break below that exposing the June 21 close at 78.11.

Prices put in a Doji candlestick below resistance at 1606.74, the 23.6%Fibonacci expansion, warning of indecision and hinting a move lower may be ahead. Initial support lines up at 1585.44, the 38.2% level, with a break below that targeting the 61.8% Fibat 1551.50. Alternatively, a break higher aims at falling trend line resistance set from late March, now at 1621.45. 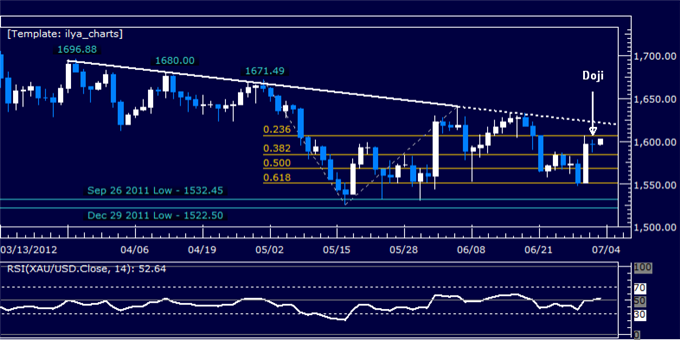 Prices are retesting the formerly broken bottom of a Flag chart formation, now at 28.11. A break higher exposes 28.45 and the 29.00 figure. Near-term support is at 26.75, with a break below that exposing the multi-month triple bottom at 26.05. 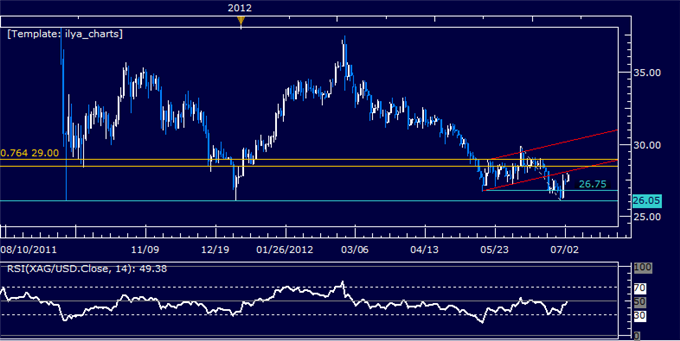 Prices are testing above falling trend line support-turned-resistance set from late January to challenge the 50% Fibonacci retracement at 3.548. A break higher exposes the next layer of resistance in the 3.618-21 are marked by a former support and the 61.8% Fib. The 38.2% level at 3.474 and a former range top at 3.424 line up as near-term downside barriers.