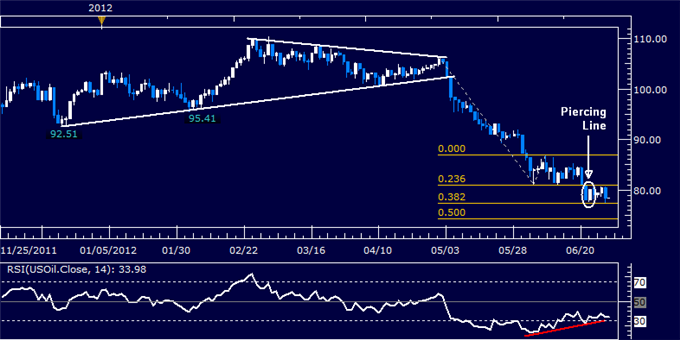 Commodities are pushing higherahead of the opening bell on Wall Street after EU leaders delivered an unexpectedly forceful response to the region’s debt and banking crisis following the first day of negotiations at a summit in Brussels. Prior reports also suggested that policymakers will spend €120 billion on growth-driving efforts as well as top up the European Investment Bank (EIB) with an additional €10 billion in capital.

Policymakers agreed to create a joint bank supervision scheme, to be established by the end of the year. Once that is operational, the EFSF/ESM bailout funds will be given authority to recapitalize banks directly without funneling funds through the governments of member states (which otherwise increases sovereign debt levels).

Finally, the terms of Spain’s bank rescue will be amended such that the EFSF/ESM funds will not gain seniority status. This would have given them priority to get paid out ahead of the country’s other creditors in the event of default and restructuring (which would discourage private buying of Spanish bonds, driving borrowing costs higher).

S&P 500 stock index futures are pointing firmly higher, suggesting the risk-on mood is likely to carry forward. That hints the sentiment-linked crude oil and copper are likely to follow shares higher while gold and silver find de-facto support as haven flows reverse out of the US Dollar.

Prices have shown little follow-through after completing a bullish Piercing Line candlestick pattern above support at 77.34, the 38.2%Fibonacci expansion, but the setup remains valid. Positive RSI divergence continues to reinforce the case for an upside scenario. Initial resistance lines up at 81.07, the 23.6% Fib, with a break higher exposing the June 7 high at the 87.00 figure. Alternatively, a push through support exposes the 50% Fib at 74.35. 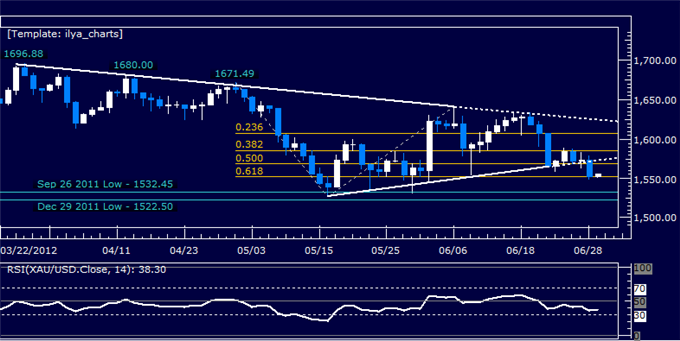 Prices are recovering from Triple Bottom support at 26.06 to retest 26.75, the May 16 low. A break above this barrier exposes the formerly broken bottom of a Flag chart formation, now at 28.03. Alternatively, a push through support exposes the 25.00 figure. 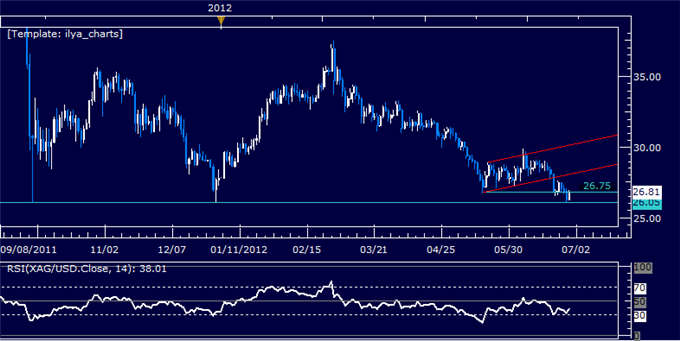