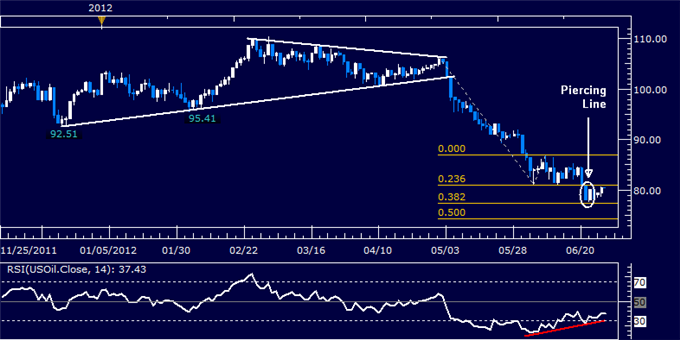 Commodity prices are following stocks lower in European trade after German unemployment rose more than economists expected in June. Anxiety about the outcome of the EU leaders’ summit getting underway in Brussels likewise seems to be applying downward pressure. Traders appear skeptical about policymakers’ ability to conjure up a meaningful near-term effort to contain the region’s sovereign debt crisis and reinforce its teetering banking sector. With the 2008 crisis triggered by the collapse of Lehman Brothers still fresh in investors’ minds, they reasonably fear that continued brinksmanship risks unleashing another large-scale market dislocation.

Dismissing the likelihood of a concrete, bold initiative from EU officials seems reasonable. Indeed, a report vaguely outlining the makings of regional fiscal reform from European Commission President Herman Van Rompuy released this week claims a concrete game-plan would need to wait until December. As we’ve argued elsewhere however, that sets the bar relatively low for an upside surprise in the event that policymakers do deliver a respectable scheme to boost regional economic growth. In fact, of French, German, Italian and Spanish heads of state already pledged €125 billion toward this end last Friday (although details remain murky).

A recession in the Eurozone and its consequences for performance in other economies (notably China, and by extension Asia in general) represents the most significant headwind facing global economic growth this year. Consequently, a convincing set of pro-growth measures that helps soften the downturn – like an easing of austerity requirements in bailout countries and boosting funding to the EIB for infrastructure projects –ought to prove supportive for risk appetite. That means growth-linked commodities like crude oil and copper may yet find support into the week-end.

In the meantime however, the mood around financial markets remains decidedly sour and a sharp decline on S&P 500 stock index futures point to more of the same as Wall Street comes online. Gold and silver are in the red along risky assets as haven inflows boost the US Dollar, applying de-facto downward pressure. A disappointing summit outcome may re-establish support for precious metals as traders look for a hedge against a Eurozone-driven market meltdown, but something like that would likely need to wait until the final communiqué following the summit emerges on Friday.

Prices completed a bullish Piercing Line candlestick pattern above support at 77.34, the 38.2%Fibonacci expansion, hinting a bounce may be ahead. Positive RSI divergence reinforces the case for an upside scenario. Initial resistance lines up at 81.07, the 23.6% Fib, with a break higher exposing the June 7 high at the 87.00 figure. Alternatively, a push through support exposes the 50% Fib at 74.35. 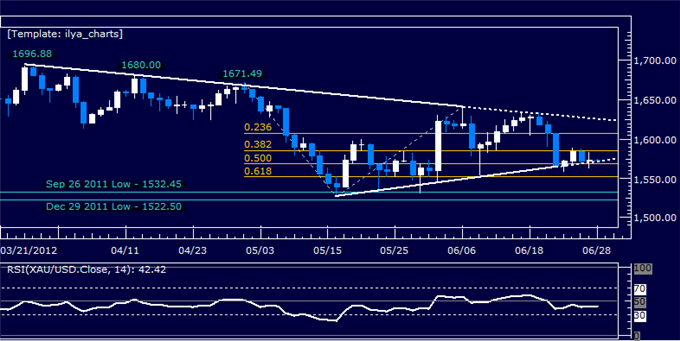 Prices continue to test support at 26.75, the May 16 low, with resistance established at the formerly broken Flag chart formation that previously acted as support (now at 27.99). A break higher initially targets 28.16. Alternatively, a reversal back through 26.75 exposes the major Triple Bottom at 26.05.