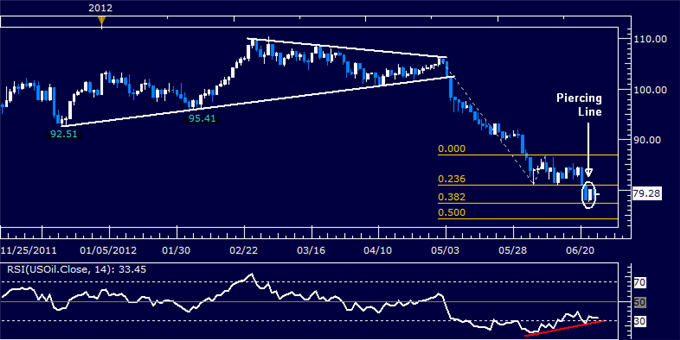 Gold May Fall as Crude Oil, Copper Rise on Firming US Economic Data

Commodity prices are little changed in early European trade but directional conviction may pick up as Wall Street comes online. All eyes are on the Richmond Fed gauge of manufacturing activity as traders hone in on June survey data for a timely gauge of where the world’s top economy stands after two difficult months in April and May.

An analogous release from the Dallas Fed surprised higher yesterday. Investors continue to hold out hope that a pickup in the US may help offset headwinds facing global growth from Europe and Asia, meaning a similar result this time around stands to boost risk appetite. Importantly, such an outcome would also reinforce the case against a future expansion of Federal Reserve stimulus.

On balance, this means an upside surprise stands to drive shares higher and boost growth-geared commodities including crude oil and copper. Indeed, both are following S&P 500 stock index futures higher ahead of the opening bell in North America. Gold and silver appear vulnerable however as ebbing QE3 expectations weigh on demand for precious metals as protection against dilution of fiat currencies.

Prices completed a bullish Piercing Line candlestick pattern above support at 77.34, the 38.2%Fibonacci expansion, hinting a bounce may be ahead. Positive RSI divergence reinforces the case for a bounce. Initial resistance lines up at 81.07, the 23.6% Fib, with a break higher exposing the June 7 high at the 87.00 figure.

Prices found support at a rising trend line set from the mid-May swing low, a barrier reinforced by the 50% Fibonacci expansion at 1568.46. A bounce here sees initial resistance at 1585.42, the 38.2% expansion, with a break above that exposing the 1600/oz figure. Alternatively, a turn lower through support exposes the 61.8% level at 1551.50. 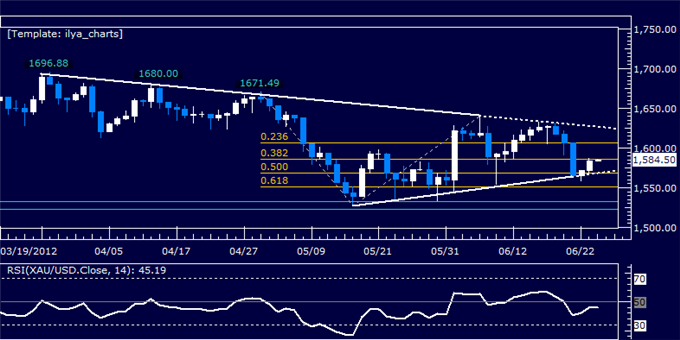 Prices bounced from support at 26.75, the May 16 low, with the bulls aiming to retest the underside of formerly broken Flag chart formation that previously acted as support (now at 27.91). A break higher initially targets 28.16. Alternatively, a reversal back through 26.75 exposes the major Triple Bottom at 26.05.