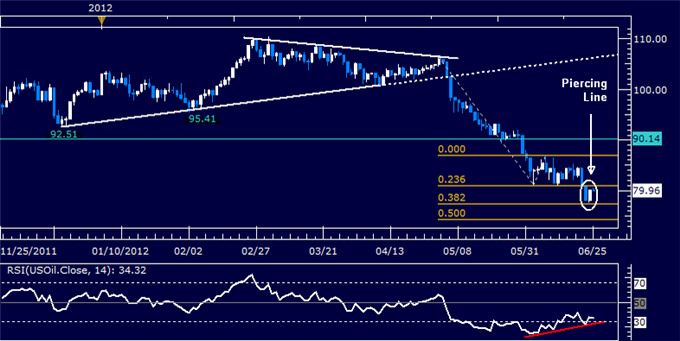 Commodities appear vulnerable after the Bank of International Settlements (BIS) said despite central banks being “cornered” into prolonging monetary stimulus, accommodative policies “have their limits” in its annual report. The statement weighed on sentiment in Asian trade, disappointing traders hopeful that the Federal Reserve will help the fragile US recovery offset headwinds from sluggish performance in Europe and Asia with a third quantitative easing effort (QE3), which policymakers opted against last week.

A pair German and French bond auctions headlines an otherwise empty European economic calendar, with markets looking to average yield and bid-to-cover readings to gauge sovereign stress in the region ahead of the two-day EU leaders’ summit slated to begin on Thursday.

The Dallas Fed Manufacturing Activity gauge comes into the spotlight later in the day. The release marks one of several key surveys traders will use to establish where the world’s top economy stands in June. Expectations call for the smallest decline in 3 months, which may help offset risk-averse tendencies to some extent. S&P 500 stock index futures are pointing firmly lower in late Asian trade however, warning that a meaningful reversal in sentiment will be an uphill battle.

Prices completed a bullish Piercing Line candlestick pattern above support at 77.34, the 38.2%Fibonacci expansion, hinting a bounce may be ahead. Positive RSI divergence reinforces the case for a bounce. Initial resistance lines up at 81.07, the 23.6% Fib, with a break higher exposing the June 7 high at the 87.00 figure.

Prices found support at a rising trend line set from the mid-May swing low, a barrier reinforced by the 50% Fibonacci expansion at 1568.46. A bounce here sees initial resistance at 1585.42, the 38.2% expansion. Alternatively, a turn lower through support exposes the 61.8% level at 1551.50. 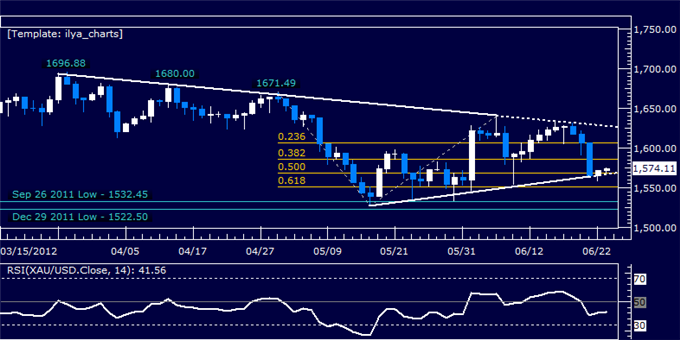 Prices are testing support at 26.75, the May 16 low, with a break downward exposing the major Triple Bottom at 26.05. Near-term resistance lines up at 27.85, the underside of formerly broken Flag chart formation that previously acted as support. 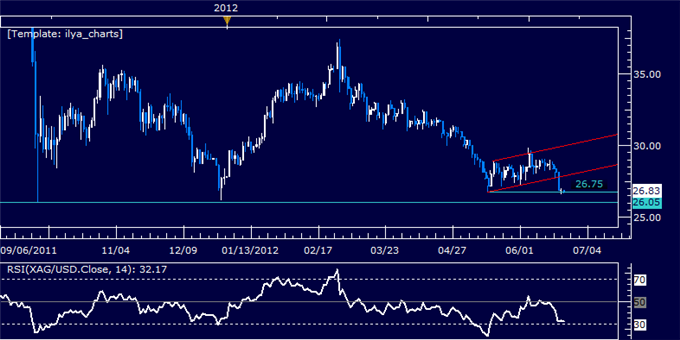 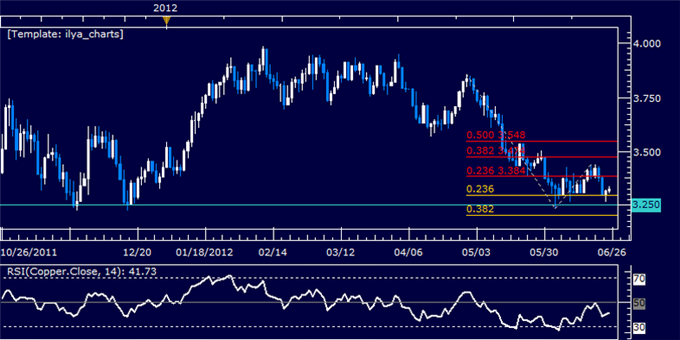