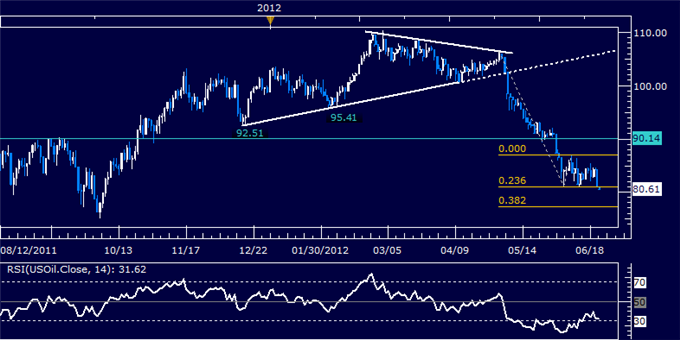 Commodity prices are trading sharply lower in early European trade, mirroring a selloff across the region’s stock exchanges. The rout follows a dismal set of Eurozone PMI figures, where the regional composite gauge showed (as expected) that manufacturing and services sector shrank at the fastest pace in three years. Signs of deepening recession in the currency bloc are weighing on risk appetite considering the slump represents the most significant headwind for global output this year.

Crude oil and copper prices are understandably lower given both commodities’ sensitivity to global growth trends. Gold and silver are likewise in the red as the dour mood stokes haven demand for the US Dollar, applying de-facto downward pressure. Yesterday’s FOMC policy announcement is amplifying sellers’ conviction after Ben Bernanke and company opted not to launch a third round of quantitative easing, denting demand for precious metals as an inflation hedge.

S&P 500 stock index futures are pointing decidedly lower ahead of the opening bell on Wall Street, arguing for more of the same as North American markets come online. Eurozone debt crisis jitters remain a significant wildcard however. Euro area finance ministers are set to begin a two-day meeting in the wake of the G20 summit completed earlier this week, where policymakers faced heavy pressure from global leaders to step up crisis containment efforts.Concrete initiatives are likely to wait until the EU leaders’ summit next week, but traders will nonetheless pay close attention to sideline commentary for early clues.

Spain is also set to release the results of an audit meant to put a firm price tag on recapitalizing the country’s banking sector. A number above or uncomfortably close to €100 billion – the upper limit of the bailout Madrid secured last week – is likely to fan the flames of risk aversion. The results of a bond auction offering 2014, 2015 and 2017 paper today will serve as an instant barometer of the fallout, with a pick-up in average yields and/or particularly weak bid-to-cover readings likely to compound pressure on risky assets. 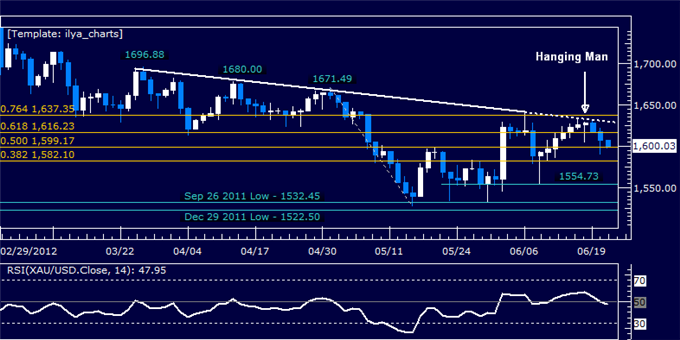 Prices completed a bearish continuation Flag chart formation, exposing 27.06 as the next downside objective. The first layer of major resistance lines up at 29.71, but the formation implies a measured downside objective at 26.46. The Flag bottom, now at 28.45, has been recast as near-term resistance. 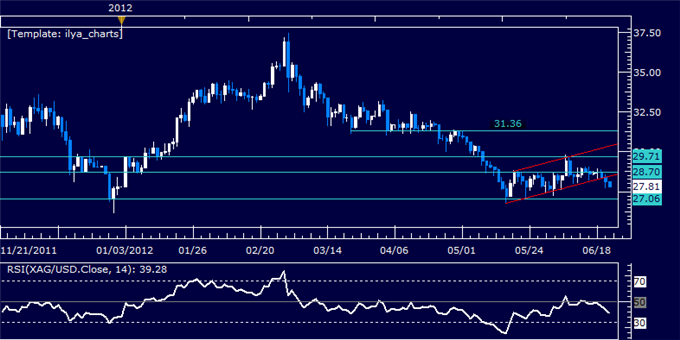 Prices broke back below the 23.6% Fibonacci retracement at 3.384 to complete a Bearish Engulfing candlestick pattern, hinting at further losses ahead. Initial support lines up at 3.296, the 23.6% Fib expansion, with a break below that exposing Triple Bottom support at 3.250. The 3.384 level is now recast as near-term resistance.