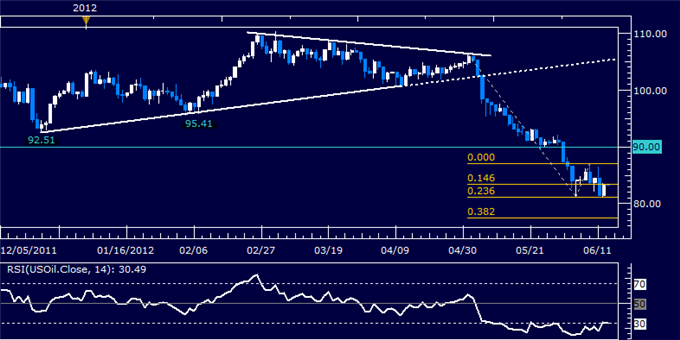 Commodities May Fall as US Retail Sales Spark Risk Aversion

Commodity prices are treading water in European trade as markets digest recent volatility, but the possibility of returning risk aversion appears increasingly probable. Traders are likely to turn defensive as Eurozone instability jitters return ahead of the weekend’s Greek election, where the country’s membership in the currency bloc seems to hang in the balance.

Today’s US Retail Sales report may serve as the trigger. Expectationscall fora 0.2 percent decline, marking the first contraction in a year. The critical unknown in the global economic growth outlook is the degree to which a still choppy North American recovery can offset headwinds from weakness in Europe and Asia. Taken against a backdrop of fading QE3 bets after last week’s Ben Bernanke testimony disappointed stimulus hopes, this means a soft print stands to weigh on sentiment.

S&P 500 stock index futures are sinking deeper into negative territory ahead of the opening bell on Wall Street, reinforcing the case for a risk-off session. This stands to send crude oil and copper lower following stock prices while gold and silver come under pressure amid recovering haven demand for the US Dollar.

Prices broke back above the 1600/oz figure to challenge resistance at 1616.23, the intersection of the 61.8% Fibonacci retracement and a falling trend line set from early March. A break above this boundary exposes the 76.4% Fib at 1637.35. The 1600 level has been recast as near-term support, with added reinforcement coming in courtesy of the 50% retracement at 1599.17. 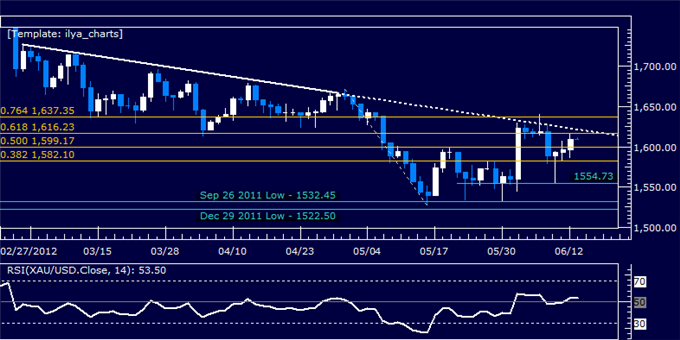 Prices broke above resistance at 28.70, exposing 29.71 as the next upside barrier. With that in mind, the overall structure appears to be showing a Flag chart formation, a setup indicative of bearish continuation. Confirmation is required on a daily close below the pattern’s bottom – now at 28.19 – which would expose 27.06 as the next downside objective. 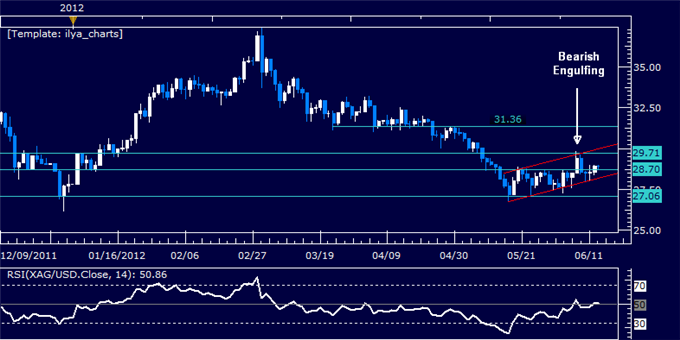 Prices appear to have taken out resistance at the top of a falling channel set from the May 1 swing high, exposing the 23.6% Fibonacci retracement at 3.384. A break above this boundary targets the 38.2% Fib at 3.474. The channel top, now at 3.319, has been recast as near-term support. 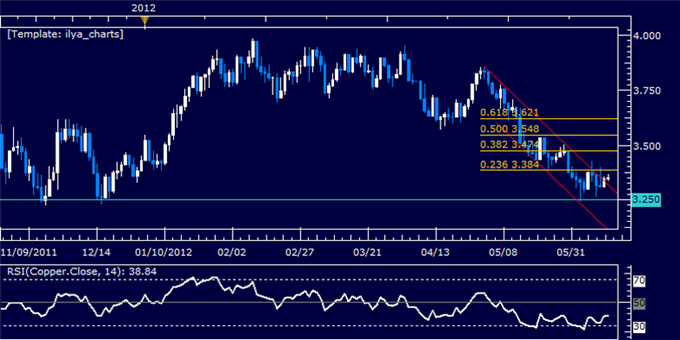