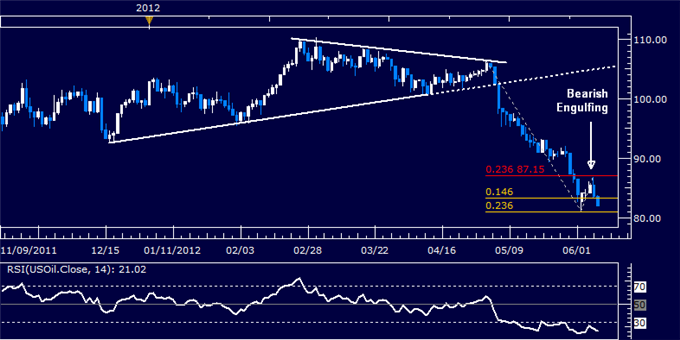 Traders are responded to ambiguity about future stimulus efforts in Federal Reserve Chairman Ben Bernanke’s testimony to the US Congress. Investors were looking for concrete guidance on a QE3 program in light of the latest stretch of disappointing US economic data, hoping it might help the nascent US recovery offset headwinds to global growth from a recession in the Eurozone and a slowdown in China.

Prices are pushing lower after putting in a Bearish Engulfing candlestick pattern below resistance at 87.15, the 23.6% Fibonacci retracement. Sellers are probing through initial support at 83.31, the 14.6% Fib expansion, with a break below that exposing the 23.6% boundary at 81.05. The 87.15 level remains as near-term resistance for the time being.

Prices are pushing lower after putting in a Shooting Star candlestick below resistance at falling trend line resistance set from early March, a barrier reinforced by the 76.4% Fibonacci retracement at 1637.35. Sellers are now probing below support at 1582.10, the 38.2% Fib to challenge the 23.6% level at 1560.98. A break of the latter boundary exposes the multi-month bottom in the 1522.50-1532.45 area. Near-term resistance lines up at the 1600/oz figure. 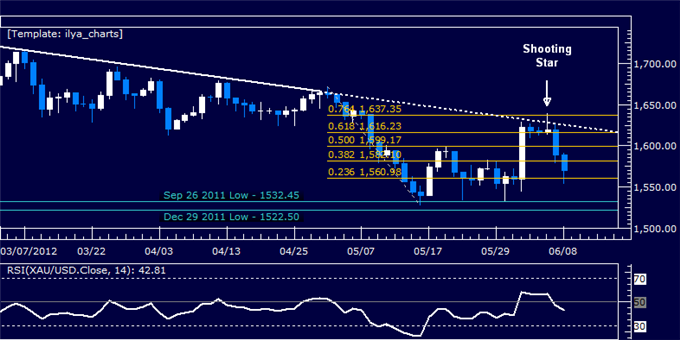 Prices reversed sharply lower from resistance at 29.71 to break back below 28.70. Sellers now target rising trend line support set from the May 16 low (now at 27.77), with a break below that exposing the major double bottom at 27.06. The 28.70 level has been recast as resistance.

Prices are retreating after putting in a Spinning Top candlestick below resistance at 3.426, the 76.4% Fibonacci retracement reinforced by the top of a falling channel set from the May 1 swing high. Double bottom support lines up at 3.250, with a break below that exposing the 123.6% Fib extension at 3.080. 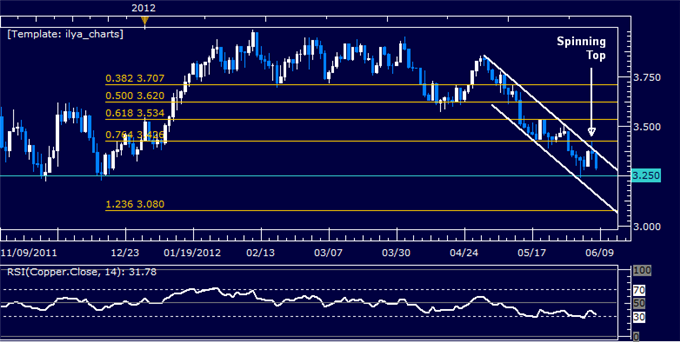