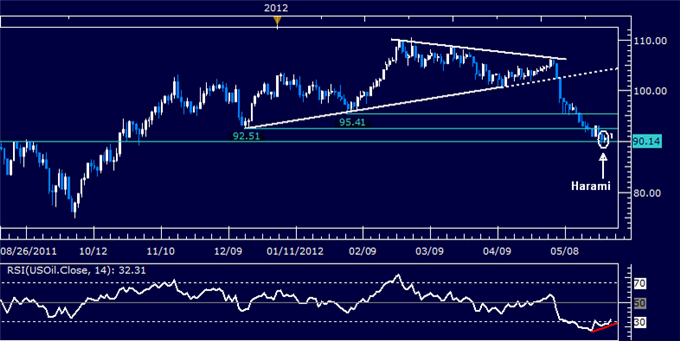 Commodity prices are trading broadly higher amid a pick-up in risk appetite to start the trading week. Sentiment-linked crude oil and copper are following share prices higher while anti-fiat gold and silver are capitalizing as the move erodes safe-haven demand for the US Dollar.

The chipper mood follows reports that Greece’s pro-austerity New Democracy (ND) party is leading in opinion polls ahead of the June 17 general election. The news alleviated fears that Athens’ next administration will renege on its EU/IMF bailout commitments, which would presumably precede a much-feared exit from the Eurozone.

On balance, the news out of Greece appears most significant as a trigger activating lager forces than a market mover in its own right. Indeed, ND was the best-performing party in the last round of elections as well but failed to get enough votes to build a ruling coalition, setting off the precarious situation the markets find themselves in at present. Put simply, an ND victory in and of itself does not assure stability or the implementation of the bailout terms.

As we argued previously, a recovery in risk appetite appeared imminent late last week as the supply of near-term negativity that could conceivably unhinge markets after three weeks of intense selling began to run dry, opening the door for profit-taking to spark a correction. The EU leaders’ summit ended withpolicymakers putting Greece’s fate in its own hands, meaning little is likely to change until the elections. Meanwhile, the latest batch of dismal PMI readings from China and the Eurozone reinforced the threat that both economies post to global growth but offered nothing thematically unfamiliar for investors.

Financial markets closed in Germany and the US today. On one hand, this suggests that little stands to derail existing momentum, hinting the commodity prices are likely to extend gains in the coming hours. On the other, it means liquidity conditions are likely to be especially thin, making for potentially choppy price action and amplifying the possibility of sharp seesaw volatility.

Prices put in a Harami candlestick pattern above resistance-turned-support at 90.14, the September 7 closing high, hinting a corrective bounce may be ahead. Positive RSI divergence reinforces the case for an upside scenario. Initial resistance lines up at 92.51, a former support marked by the December 16 low, with a push above that targeting 95.41 (another former bottom now acting as resistance at the February 2 low). 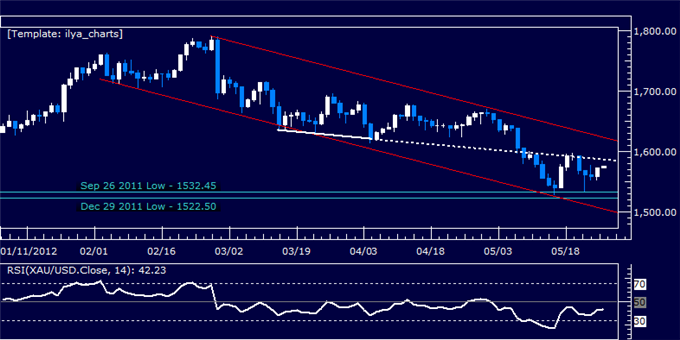 Prices are recovering from support at 27.06 after putting in a Bullish Engulfing candlestick pattern to aim at resistance at 28.70. A break above this level initially exposes 29.71. Alternatively, a reversal through support exposes the 26.05-15 area. 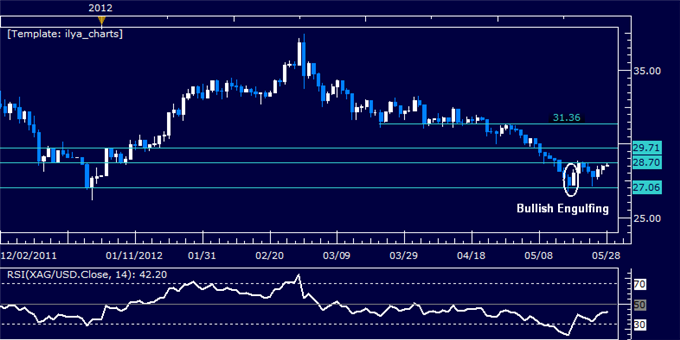 Prices are mounting a recovery from support at 3.438, the 100%Fibonacci expansion. Positive RSI divergence reinforces the case for an upside scenario. Initial resistance lines up at 3.537, the 76.4% expansion level. Alternatively, a break below support exposes the 123.6% level at 3.327. 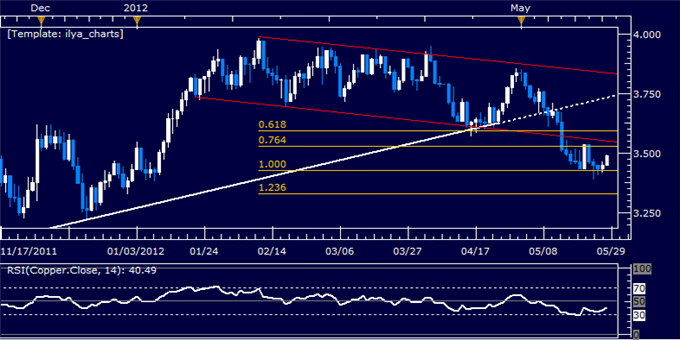