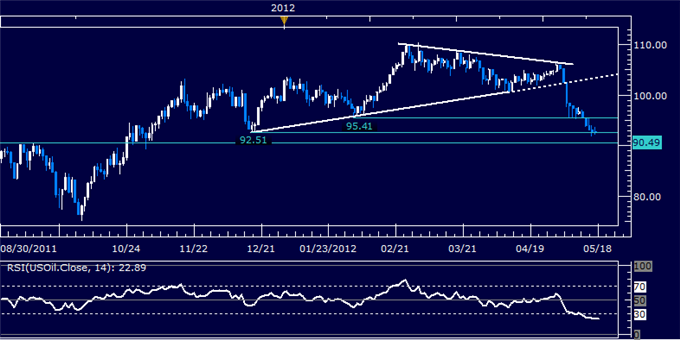 Commodity prices are showing diverging performance in early European trade. Growth-sensitive crude oil prices are following shares lower but likewise sentiment-linked copper is essentially flat. Meanwhile, gold and silver are on the upswing, following up on a jump higher in late Wall Street trade after a disappointing set of US economic data seemed to stoke Fed QE3 bets and drive demand for precious metals as an alternative store of value while boosting Treasuries and weighing on the US Dollar.

Looking ahead, a difficult environment presents itself. Risk appetite is under pressure as the aforementioned US data set dents hopes that an accelerating US recovery will help offset slowing performance in Europe and Asia. Mounting Eurozone crisis woes are compounding the dour mood after Moody’s downgraded 16 Spanish banks overnight, stoking fears that lenders in the currency bloc’s fourth-largest economy (and possibly elsewhere) may buckle as Greek-born jitters metastasize region-wide.

However, three consecutive weeks of aggressive selling across the spectrum of risky assets may force a period of profit-taking, with traders unlikely to be willing to carry significant directional exposure into the weekend given the degree of unprecedented uncertainty surrounding the satiation in the Eurozone. S&P 500 stock index futures have erased overnight losses and now point higher, hinting that correction may be brewing that pulls crude oil and copper higher along with equity prices.

Gold and silver appear likely to remain well-supported however. The current environment plays to the metals’ appeal both as inflation hedges (given QE3 speculation) and as assets that don’t necessarily rely on financial markets to derive their value, a major advantage at a time when another 2008-style rout is appearing increasingly plausible. In the absence of US economic data, the high-profile Facebook IPO may also prove to be a catalyst to consider.

Prices put in back-to-back Spinning Top candlesticks above support at 92.51, the December 16 low, pointing to indecision and hinting a bounce may materialize. Initial resistance lines up at 95.41, the February 2 session low. Alternatively, renewed selling through support exposes 90.49. 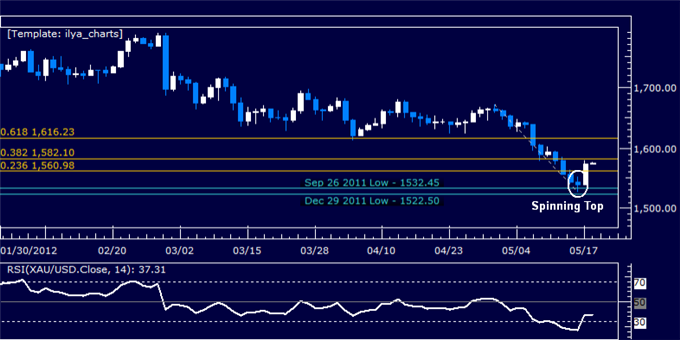 Prices are recovering from support at 27.06 to challenge resistance in the 28.43-70 area marked by a former support level and the underside of a previously broken falling channel set from early March. A break above this barrier exposes 29.71. Alternatively, a push through support exposes the 26.05-15 region marked by the September 26 and December 29 spike lows. 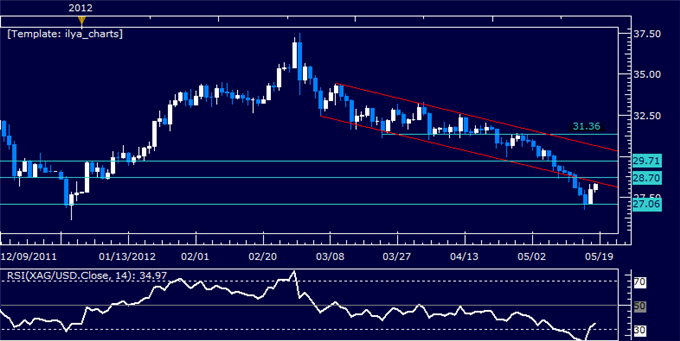 Prices are mounting a shallow recovery after putting in an Inverted Hammer candlestick above support at 3.459, the 50% Fibonacci retracement. Buyers see initial resistance at 3.584, marked by the 38.2% Fib level. Alternatively, a reversal through support exposes the 61.8% retracement at 3.334. 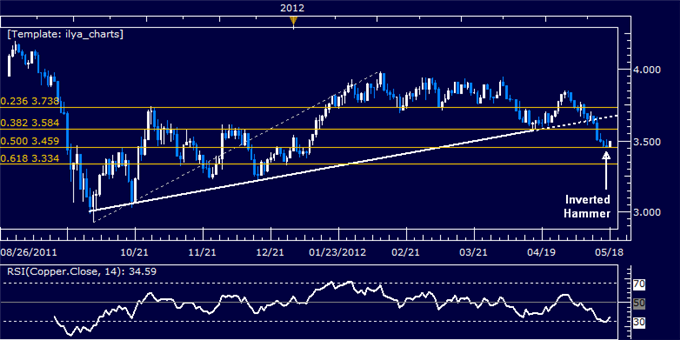