Commodity prices are on the upswing in early European trade, with markets beginning to show cautious signs of recovering risk appetite. A corrective bounce seems reasonable. The prospect of Greece exiting the Eurozone – the catalyst behind the latest rout across the spectrum of risky assets – appears to have run out of shocking power for the time being as traders wait for a repeat of the general election on June 15 to get their cues on the situation. In the meantime, the negative news-flow already out there has likely entered prices already, encouraging a period of profit-taking.

S&P 500 stock index futures are pointing firmly higher ahead of the opening bell on Wall Street, hinting sentiment-geared crude oil and copper prices are likely to continue to recover while gold and silver capitalize on easing safe-haven demand for the US Dollar to stage a pull-up. The US economic docket may help drive sentiment higher. Initial and continuing Jobless Claims are expected to print lower, with the former hitting the lowest in six weeks at 365K while the latter sets another four-year low at 3225K. Separately, the Philadelphia Fed business confidence gauge is forecast to rebound in May after hitting a three-month low in April. Finally, the Leading Indicators composite is seen rising 0.1 percent in April, marking the seventh-consecutive increase and hitting the highest level since June 2008.

Prices put in a Spinning Top candlestick above support at 92.51, the December 16 low, hinting a bounce may be ahead. Initial resistance lines up at 95.41, the February 2 session low. Alternatively, renewed selling through support exposes 90.49.

Prices put in a Spinning Top candlestick above support in the 1532.45-1522.50 area, marked by the September 26 and December 29 spike lows, hinting a bounce may be ahead. Initial resistance lines up at 1561.03, the 23.6% Fibonacci retracement. Alternatively, a push through support exposes the 1500/oz figure.

Prices are recovering from support at 27.06 marked by the December 28 session close, with a recovery seeing initial resistance in the 28.54-70 area marked by a former support level and the underside of a previously broken falling channel set from early March. Alternatively, a push through support exposes the 26.05-15 region marked by the September 26 and December 29 spike lows. 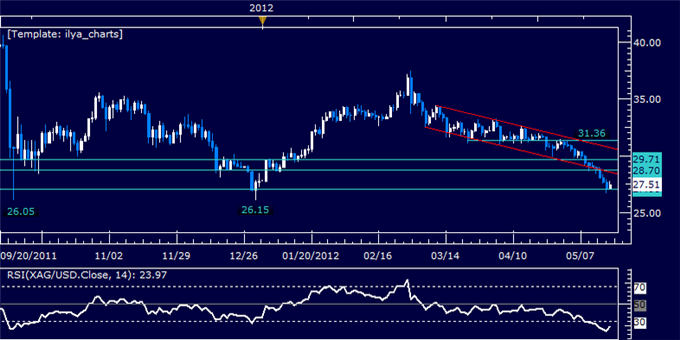 Prices are mounting a shallow recovery from support at 3.459, the 50% Fibonacci retracement, with buyers seeing initial resistance at 3.584 marked by the 38.2% Fib level. Alternatively, a reversal through support exposes the 61.8% retracement at 3.334. 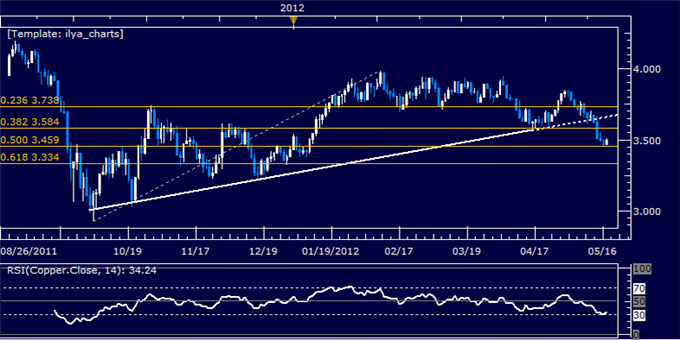