Gold, Silver Rise as US Dollar Pulls Back After Eurozone GDP Data

Gold and silver prices are on the upswing in European trade after the preliminary set of Eurozone GDP figures showed output growth stalled in the first quarter amid expectations for a second consecutive contraction, narrowly avoiding putting the currency bloc into a technical recession. The result proved supportive for overall risk appetite considering the slump in Europe is easily the most significant headwind facing overall global performance this year, boosting shares and weighing on the safe-haven US Dollar to offer precious metals a de-facto lift.

Crude oil and copper prices are lagging for the time, trading effectively flat in Europe, but a further nudge to sentiment from the day’s US data set may tip the scales into positive territory. Headline CPI figures are set to show the annual inflation rate slowed to 2.3 percent in April, fueling Fed QE3 expectations. The Empire Manufacturing gauge of New York State factory-sector activity is likewise poised to show a supportive outcome, with economists expecting a rebound in May after the gauge sank to a five-month low in April, though a slower Retail Sales print may act as a countervailing force. Still, S&P 500 stock index futures are pointing firmly higher, bolstering the case for an upside scenario.

Prices took out support at 95.41, with sellers now targeting the December 16 low at 92.51. The 95.41 level has been recast as immediate resistance. Importantly, relative strength studies are their most oversold since early August when prices set a major bottom, hinting at least a corrective bounce may be an increasingly likely scenario near-term.

Prices broke support at 28.70 marked by a horizontal barrier as well as the bottom of a falling channel established since early March. Sellers now target 27.06 as the next downside objective. The 28.70 level has been recast as near-term resistance. 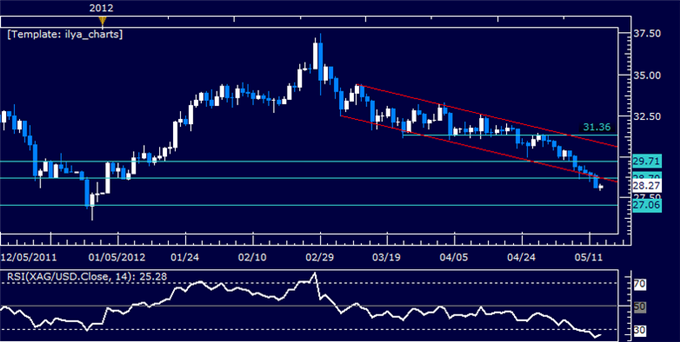 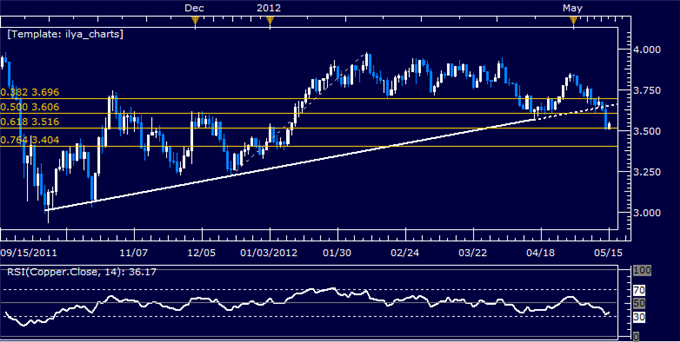