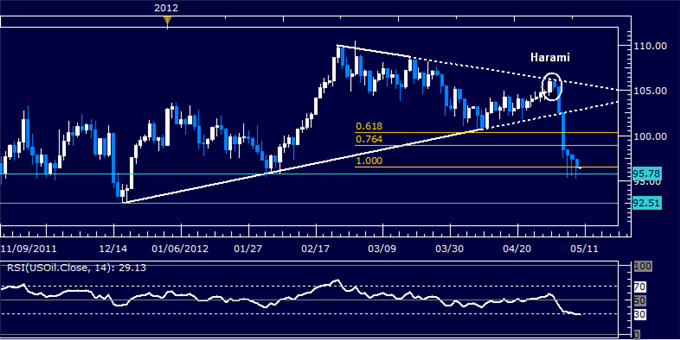 Commodity prices are yielding a mixed performance in early European trade as markets look for the next market-moving catalyst having somewhat absorbed the weekend’s destabilizing political news-flow out of the Eurozone. S&P 500 stock index futures are pointing narrowly higher, hinting growth-geared crude oil and copper prices may have room to correct higher while the US Dollar pulls back, offering anti-fiat gold and silver a chance to retrace some lost ground as well.

Risk sentiment may be quick to unravel again however as traders digest the May’s ECB monthly report, which this time around included the quarterly survey of professional forecasters polled by the central bank and considered instrumental to the policy-setting process. Growth forecasts for 2012 and 2013 were downgraded. This year, a deeper recession is now expected, GDP shrinking 0.2 percent compared with 0.1 percent estimated in February. Next year, output is now seen adding 1 percent, down from 1.1 percent expected previously.

Meanwhile, the inflation forecast has been revised sharply higher to 2.3 percent in 2012 and 1.8 percent in 2013 compared with previous bets on 1.9 and 1.8 percent respectively. On balance, this hints at an environment where the ECB will be slow to offer stimulus even as headwinds strengthen, a dismal prospect for overall growth considering the Eurozone is overwhelmingly likely to be the most significant drag on global performance for the foreseeable future.

On the US economic data front, weekly jobless claims data as well as the March set of Trade Balance figures are on tap. Federal Reserve Chairman Ben Bernanke is also due to cross the wires, but the outing may not offer much fodder for price action. Bernanke is speaking at a Chicago Fed conference on efforts to strengthen capital reserves, so the probability that something meaningfully game-changing emerges seems relatively low as traders remain preoccupied with the likelihood of a QE3 program.

Selling continued after completion of a Triangle chart formation carved out since late March – a setup indicative of bearish continuation – with prices narrowly taking out support at 1591.00 marked by the 50%Fibonacci expansion. The bears now aim to challenge the 61.8% level at 1569.73. The 50% Fib has been recast as near-term resistance, with a push above that targeting the 38.2% level at 1661.75. Longer term, the Triangle pattern implies a measured downside objective at 1548.21. 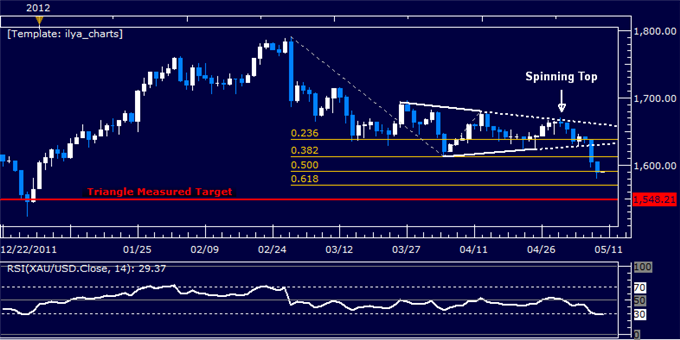 Prices are showing a Hammer candlestick following a test of support at the bottom of a falling channel established since early March (now at 28.87), hinting a bounce may be ahead. Initial resistance lines up at 29.71, with a break above that targeting the channel top at 31.04. Alternatively, a push through the channel bottom and 28.70 would expose 27.06. 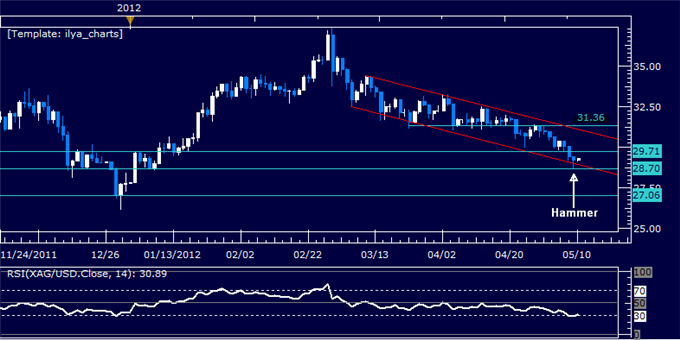 Prices are testing support at a rising trend line set from the October 3 bottom, now at 3.644. A bounce sees initial resistance in the 3.696-3.713 area, marked by the October 28 closing high and the 38.2% Fibonacci retracement level, with a break higher initially exposing 3.756. Alternatively, a push through the trend line sees the next layers of support at 3.606 and 3.516. 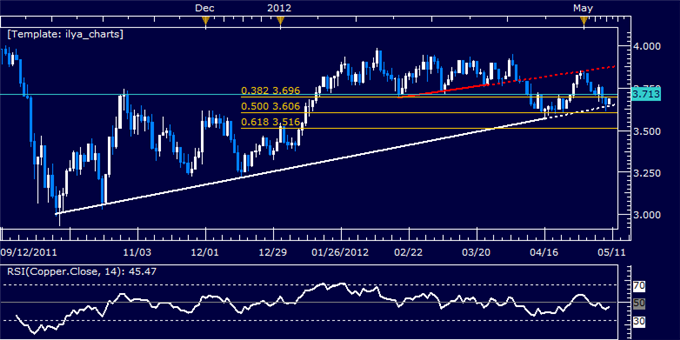