Commodities are under fire once again in early European trade as Eurozone crisis fears continue to drive risk aversion, weighing on growth-geared crude oil and copper prices. The dour mood is also stoking safe-haven flows into the US Dollar, thereby applying de-facto selling pressure on gold and silver. S&P 500 stock index futures are pointing firmly lower ahead of the opening bell on Wall Street, hinting more of the same is up ahead.

Greece remains at the forefront following reports that Syriza party chief Alexis Tsipras – the second-largest vote-getter at the weekend’s election – said would-be coalition partners must renounce the EU austerity program to form a government with his support. Traders fear that Greece is increasingly likely renege on its obligations under the EU/IMF bailout program. This may see it ejected from the Eurozone and possibly the EU altogether, an unprecedented move that falls largely outside the realm of the forecast-able in terms of its practical implications for financial markets.

On the economic data front, another lackluster offering is on tap in the US with weekly MBA Mortgage Applications as well as the March Wholesale Inventories report on tap. The official DOE set of weekly crude inventory figures is likewise due to cross the wires.

A selloff triggered after the appearance of a Harami candlestick pattern identified last week found interim support in the 95.78-96.56 area marked by a horizontal barrier in play since early November 2011 as well as the 100% Fibonacci expansion. A pair of Hammer candlesticks hints that a bounce may be ahead. Initial resistance lines up at 98.89, the 76.4% expansion, with a break above that exposing the 61.8% level at 100.33. Alternatively, a push through support targets 92.51.

Prices completed the Triangle chart formation carved out since late March – a setup indicative of bearish continuation – and took out support at 1661.75 marked by the 38.2% Fibonacci expansion. Sellers now aim to challenge the 50% Fib at 1591.00. Longer term, the Triangle pattern implies a measured downside objective at 1548.21. The 38.2% level has been recast as immediate resistance.

Prices are testing the bottom of a falling channel established since early March (now at 28.96), a hurdle reinforced by a horizontal barrier at 28.70. Breaking the latter level on a daily closing basis would expose 27.06. Near-term resistance is now at 29.71. 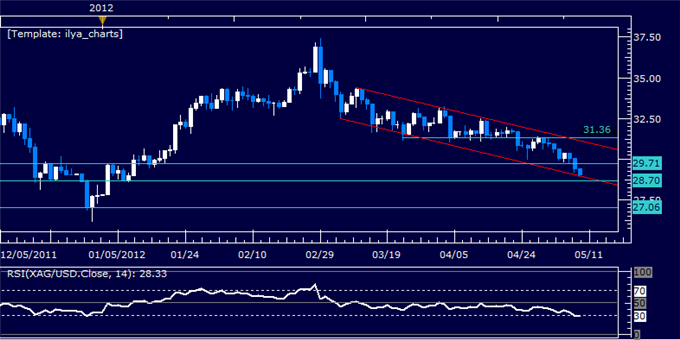 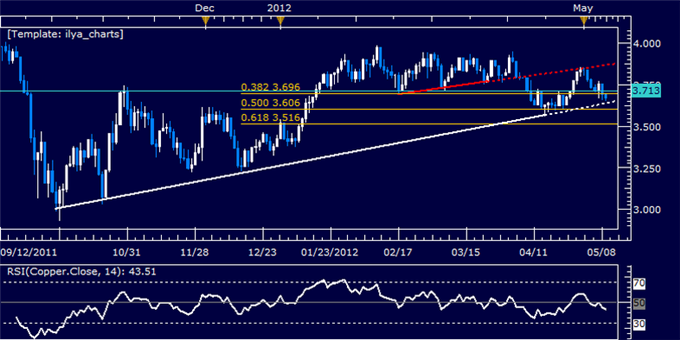