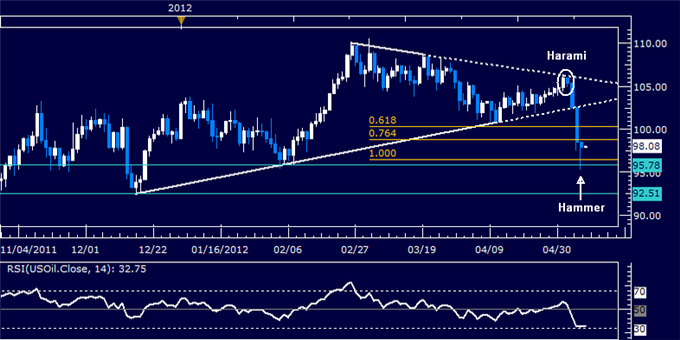 The task now falls on Alexis Tsipras, the head of the Syriza party that ran on a platform of renegotiation Greece’s obligations under the EU/IMF bailout program. Investors are concerned that the elevation of Tsipras will threaten to unravel hard-fought efforts to keep Greece within the Eurozone and mark the first forcible exit a country from the currency bloc, a prospect with as-yet unpredictable implications. The return of UK markets after yesterday’s absence for a bank holiday is likely compounding the dour mood as London’s traders get their chance to price in the weekend’s worrying news-flow.

The selloff marked by a Harami candlestick pattern identified last week found interim support in the 95.78-96.56 area marked by a horizontal barrier in play since early November 2011 as well as the 100% Fibonacci expansion. A hammer candlestick hints that a bounce may be ahead. Initial support lines up at 98.89, the 76.4% expansion, with a break above that exposing the 61.8% level at 100.33. Alternatively, a push through support targets 92.51.

Prices are testing support in the 1630.00-1637.73 area marked by the bottom of a Triangle chart formation carved out since late March and the 23.6% Fibonacci expansion. The Triangle setup is typically indicative of continuation, which in this case carries bearish implications. A break through support initially exposes the 38.2% expansion at 1611.79. Triangle top resistance is now at 1661.75.

Prices are testing below support at 29.71, with a break lower exposing the bottom of a falling channel established since early Mach now at 29.04. Near-term resistance lines up in the 31.20-31.36 area, marked by the channel top and a horizontal former support level now recast as an upside barrier.

Prices are testing through support at 3.713, with a break lower exposing a rising trend line set from early October now at 3.638. Initial resistance is found at a shorter-term rising trend line that formerly acted as support set from mid-March, now at 3.864.