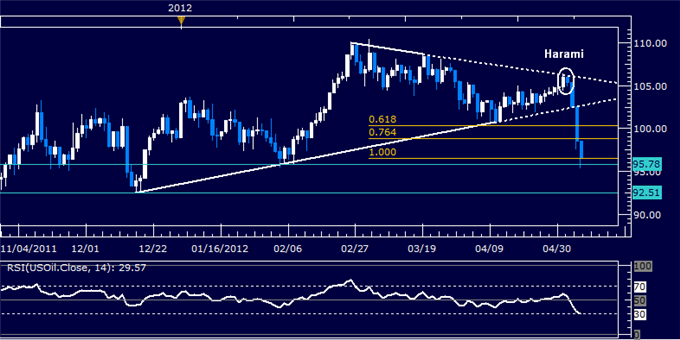 Commodities are under pressure in European hours trade as markets respond to over-the-weekend news that Socialist candidate Francois Hollande beat incumbent Nicolas Sarkozy to become the next President of France. Traders are worried that the anti-austerity Hollande will unravel Eurozone debt crisis relief efforts, which like most EU policy have heavily relied on the Franco-German axis.

A failure by the mainstream pro-austerity Pasok and New Democracy (ND) parties to secure a joint parliamentary majority in Greek elections also held this weekend is compounding sovereign risk fears. Pasok and ND had previously signaled they were prepared to form a joint coalition, but now such an arrangement would require cajoling at least one currently anti-austerity junior member into the arrangement.

Growth-geared crude oil and copper prices are following stocks lower while gold and silver are under pressure as the US Dollar rides haven demand higher. Losses in the precious metals space are very modest however as fears of a Eurozone-driven credit crisis akin to the events of 2008 boost the appeal of assets not necessarily reliant on well-functioning financial markets to maintain their value. A quiet economic calendar offers little to derail momentum and S&P 500 stock index futures are deeply in the red, hinting current trends are likely to carry forward as Wall Street comes on line.

The selloff marked by a Harami candlestick pattern identified last week continues, with prices testing support in the 95.78-96.56 area marked by a horizontal barrier in play since early November 2011 as well as the 100% Fibonacci expansion. A break below this region exposes 92.51. Near-term resistance stands at 98.89, the 76.4% expansion.

Prices are testing support in the 1629.60-1637.95 area marked by the bottom of a Triangle chart formation carved out since late March and the 23.6% Fibonacci expansion. The Triangle setup is typically indicative of continuation, which in this case carries bearish implications. A break through support initially exposes the 38.2% expansion at 1611.79. Triangle resistance is now at 1662.91.

Prices have formed a Harami candlestick above support at 29.71, hinting a bounce may be ahead. Initial resistance lines up at 31.36, a former support now acting as resistance and reinforced by the top of a falling channel set from mid-March. 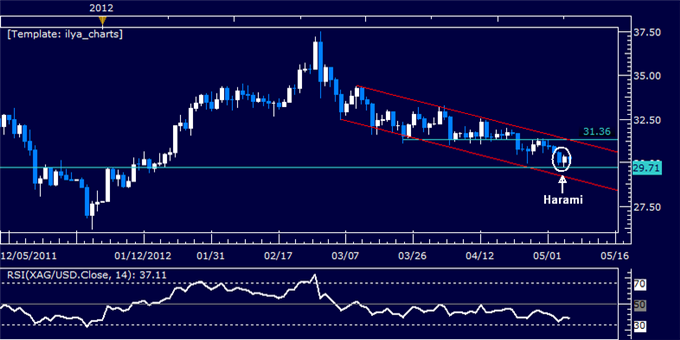 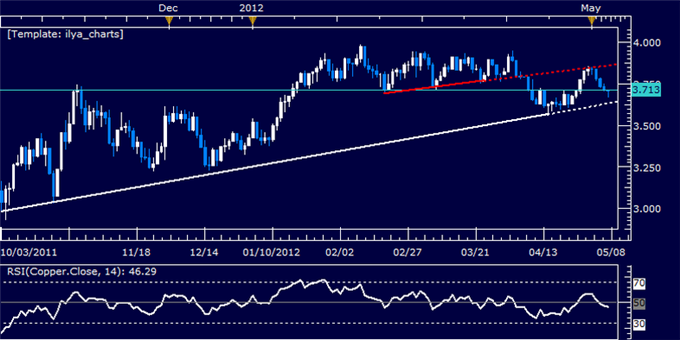