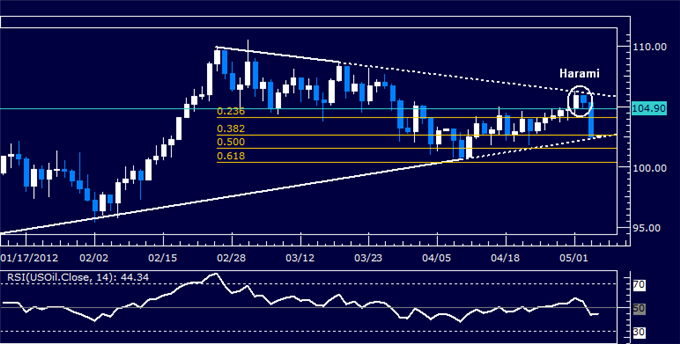 Commodities Sold as Risk Appetite Fades in Europe, US Jobs Data on Tap

All eyes are on the US Employment report into the week-end. Expectations call for the nonfarm payrolls to rise 160,000 in April after rising 120,000 in the previous month. The release presents a variety of divergent scenarios for the financial markets.

On one hand, a stronger-than-expected result can be interpreted as broadly supportive for risk appetite and drive growth-geared commodities including crude oil and copper higher while weighing on the US Dollar amid waning safe haven demand, an outcome supportive for gold and silver. Alternatively, such an outcome can be viewed as USD-supportive in that it would reduce the probability of a Fed QE3 program, weighing on precious metals and likely hurting risky assets hoping the choppy US recovery will benefit from added help from monetary policy.

Similarly, a disappointing print can be rationalized from both perspectives as well, driving USD higher amid risk aversion or sinking it as stimulus hopes are reinforced. The former seems clearly negative for the spectrum of commodity prices while the latter is supportive. Furthermore, it is not outside the realm of possibility to see precious metals take the QE3-themed route while cycle-sensitive commodities focus on the global growth implications of the result.

With this in mind, a clear bearing is difficult to establish. The markets appear likewise puzzled, with S&P 500 index futures flat before the opening bell on Wall Street, though price action in early European trade reflects risk-averse cues as traders turn defensive and pare exposure ahead of the weekend’s elections in Greece and France. On balance, it seems prudent to treat the jobs report as an opportunity to gauge the context within which to interpret US data going forward rather than a discrete trading opportunity in its own right.

Prices followed a Harami candlestick pattern below resistance at a falling trend line set from late February indentified yesterday with a sharp move lower. Sellers are now upward-slowing support established since mid-December, with a break lower exposing the 50% Fibonacci expansion at 101.60. Near-term resistance lines up at 104.13, the 23.6% Fib. 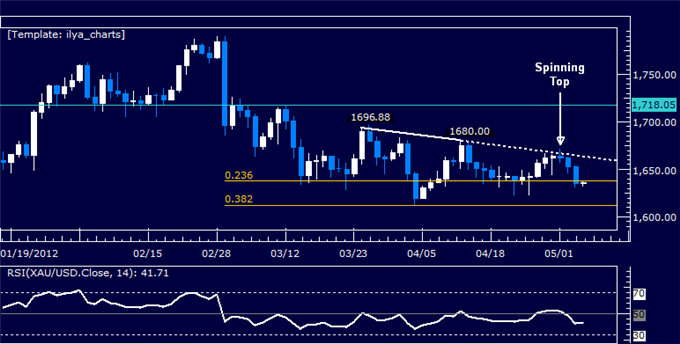 Prices are recoiling from resistance at 31.36, a former support reinforced by a downward-sloping trend line set from the April 3 high. Sellers face initial barriers at 29.96, the April 25 low, followed by the bottom of a falling channel set from early March now at 29.44. Near-term resistance is at 30.99. 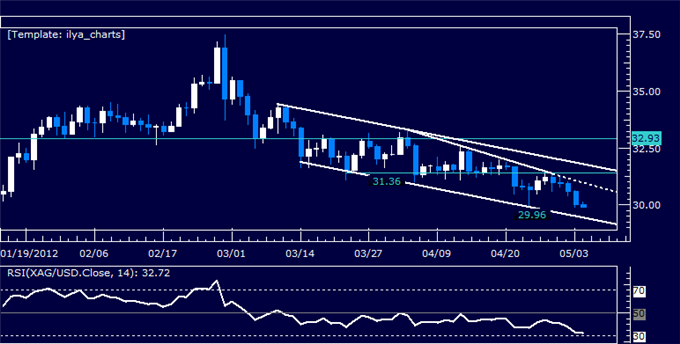 Prices turned lower as expected after putting in a Hammer candlestick below support-turned-resistance at a rising trend line set from mid-February. Initial support lines up at 3.713. Trend line resistance is now at 3.859. 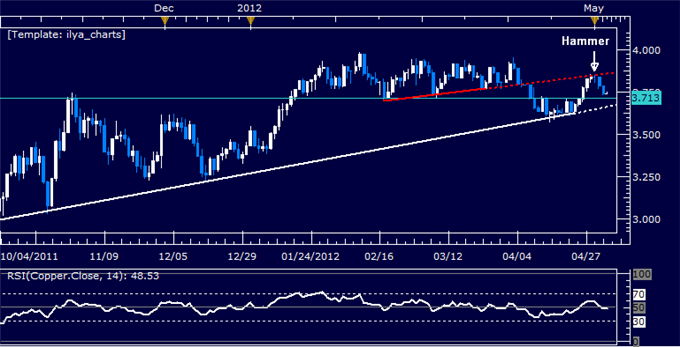