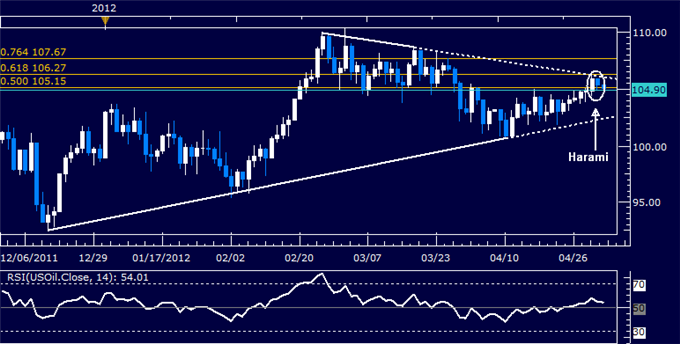 Commodities Drop on China Growth Fears, ECB and US Data Key Ahead

Commodity prices are extending Asia-session losses in early European trade, weighed down by a drop in China’s Non-manufacturing PMI index on fears that one the world’s top-two consumers of raw materials is slowing. Looking ahead, all eyes are on the European Central Bank interest rate decision. Traders are looking for guidance on steps policymakers are prepared to take to alleviate what appears to be deepening recession after yesterday’s sharp slump in final PMI readings and another record-high unemployment print.

An outright rate cut seems unlikely this time around with inflation stubbornly high at 2.6 percent. However, if Mario Draghi and company invoke the ECB’s singular mandate of price stability to justify inaction and fail to reassure markets with the prospect of forthcoming easing in the months ahead, worries about Eurozone-bornheadwinds facing global output threaten to weigh on risk appetite. This bodes ill for cycle-sensitive commodities including crude oil and copper, while gold and silver may follow lower as haven-seeking capital flows boost the US Dollar.

Later in the day, the spotlight turns to US Jobless Claims and the ISM Non-manufacturing Composite figures. These are likely to be interpreted in terms of their implications for the likelihood of Fed QE3, which means softer outcomes could counter-intuitively support risk appetite and weigh on the Dollar (both via sentiment trend and dilution fears) to the benefit of precious metals. With that in mind, significant follow-through on this front may be lackingas traders reserve judgment until after Friday’s all-important Nonfarm Payrolls data point crosses the wires. This means any negative carry-over from the ECB’s outing may have scope to hold sway over price action.

Prices put in a Harami candlestick pattern below resistance at a falling trend line set from late February, hinting a pullback may be ahead. Initial support lines up in the 104.90-105.15 area, marked by a horizontal barrier and the 50% Fibonacci retracement level. A break below here exposes rising trend line support at 102.42. Resistance is now at 106.03 and bolstered by the 61.8% Fib at 106.27.

Prices followed a Spinning Top candle below trend line resistance capping gains since late March with a push lower. Sellers face initial support at 1637.95, the 23.6% Fibonacci expansion, with a break lower exposing the 38.2% level at 1611.77. Trend line resistance is now at 1664.48. 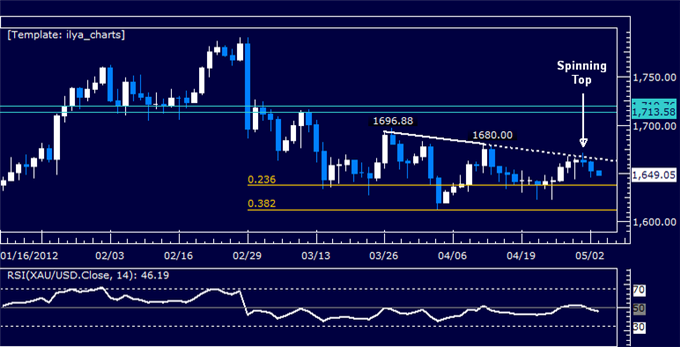 Prices are recoiling from resistance at 31.36, a former support reinforced by a downward-sloping trend line set from the April 3 high. Sellers face initial barriers at 29.96, the April 25 low, followed by the bottom of a falling channel set from early March now at 29.50. Near-term resistance is at 31.08. 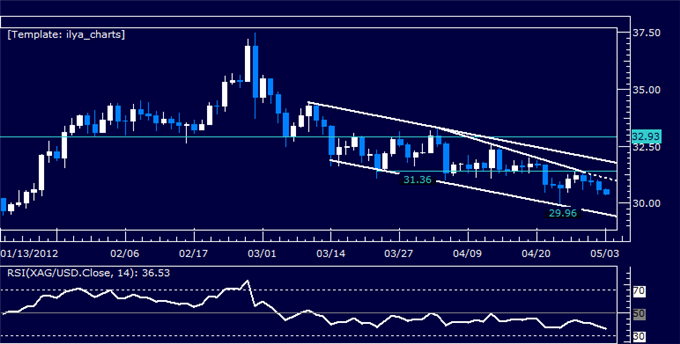 Prices turned lower as expected after putting in a Hammer candlestick below support-turned-resistance at a rising trend line set from mid-February. Initial support lines up at 3.713. Trend line resistance is now at 3.855. 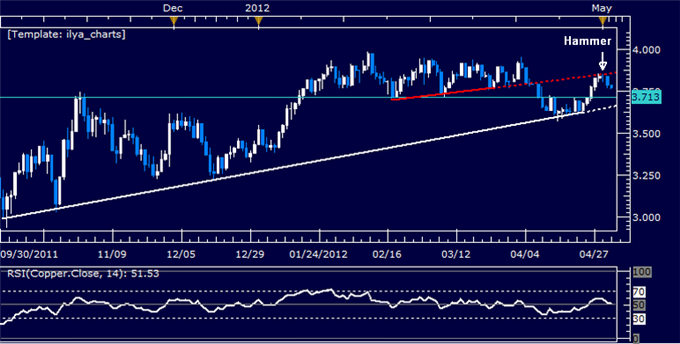