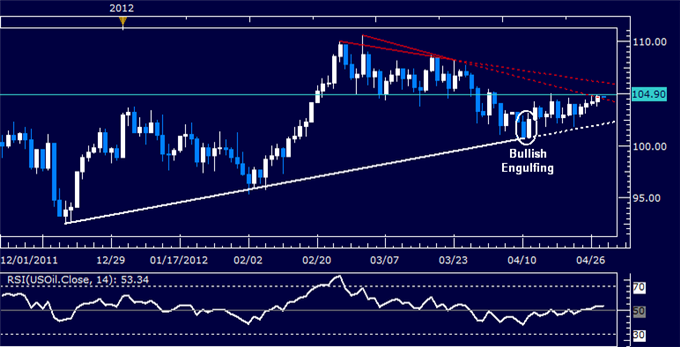 Commodities Look to US Data for Direction on Evolving QE3 Hopes

Last week, commodities seized on comments from Fed Chairman Ben Bernanke saying policymakers were “prepared to do more” to help the economy if growth faltered, singling out additional quantitative easing (QE) as still “on the table”. The initial reaction – a rebound in risk appetite and selloff in the US Dollar – reflected traders’ belief that the statement marked an increase in the likelihood of QE3. The response ignored the rest of Bernanke’s statement however, where he warned that it would be “very reckless” to allow higher inflation for the sake of reducing unemployment against a backdrop of an upgraded inflation expectations on the rate-setting FOMC committee.

From here, traders look to a busy week of US data releases to continue shaping QE3 expectations, with soft readings likely to reinforce bets on another round of stimulus while upside surprises force a reconsideration of what Ben Bernanke was alluding to. Personal Income and Spending figures enter the spotlight today, with the latter reading of particular interest as forecasts point to moderation in March following a sharp jump in the preceding month. Chicago PMI and the Dallas Manufacturing Activity gauge are likewise on tap, with moderation expected on both fronts.

Soft readings are likely to serve as fodder for QE speculation and stand to boost risk-sensitive crude oil and copper prices. Needless to say, gold and silver are likewise primed to advance in such a scenario on rising store-of-value demand. Positive surprises will probably produce the opposite effect, denting stimulus hopes and sending the US Dollar higher to the detriment of most of the commodities space.

Prices are testing the top of a falling channel set from early March now at 1661.75, with a break higher exposing 1680.35. Support lines up at 1638.02, the 23.6% Fibonacci expansion. Absent a daily close above the channel top, the overall trend remains bearish. 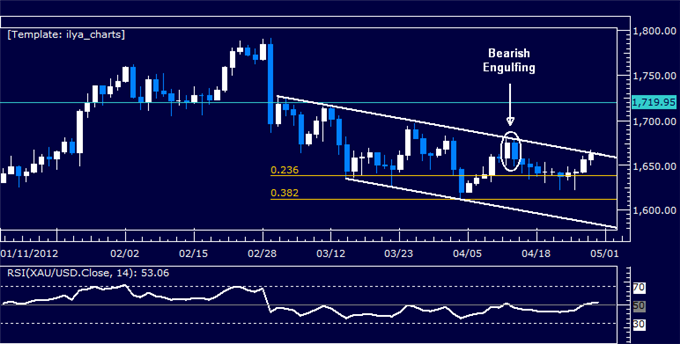 Prices followed a Hammer candlestick above support at 30.23 with a break through nearby resistance at 31.11, with the bulls now aiming to challenge a falling trend line set from early March (currently at 31.66). A push above this exposes 32.93. Alternatively, a turn lower back through 31.11 exposes the 30.23. 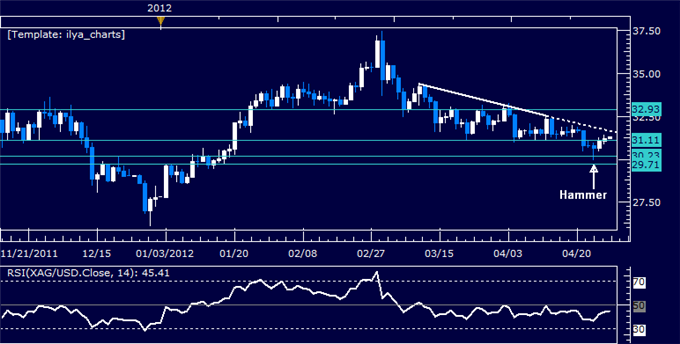 Prices are retesting above former support at a rising trend line set from mid-February, with a break higher exposing the next upside barrier just below the 4.000 figure in the 3.933-3.988 area. For now, initial support lines up at 3.713. 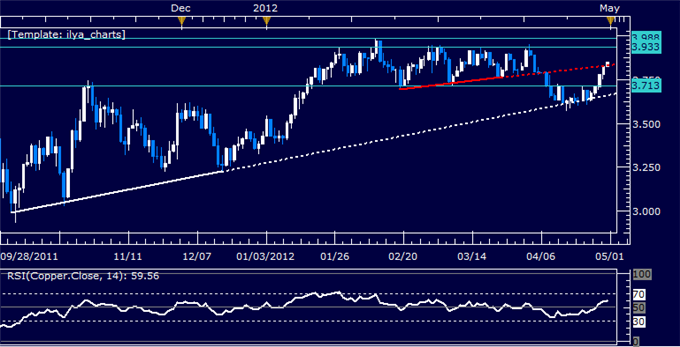