On the economic data front, all eyes are on the first-quarter US Gross Domestic Product figures, where expectations point to a 2.5 percent annualized quarterly increase after a 3 percent rise in the three months through December.The result is likely to be interpreted in the context of this week’s FOMC policy meeting, with a better-than-expected outcome carrying the possibility of reminding traders that Ben Bernanke’s commentary was hardly as supportive of QE3 as the markets’ initial reaction suggested. Alternatively, a disappointing print will further fuel stimulus bets, which certainly seems supportive for precious metals but may also (somewhat counter-intuitively) help on the risk appetite front as well.

Prices are showing a Shooting Star candlestick below resistance at 104.90, a former support level reinforced by the top of a falling channel set from early March. The setup warns of bullish exhaustion and hints a turn lower maybe ahead. Initial rising trend line support is now at 101.98.

Prices the top of a falling channel set from early March now at 1660.60, with a break higher exposing 1680.35. Support lines up at 1638.02, the 23.6% Fibonacci expansion. Absent a daily close above the channel top, the overall trend remains bearish. 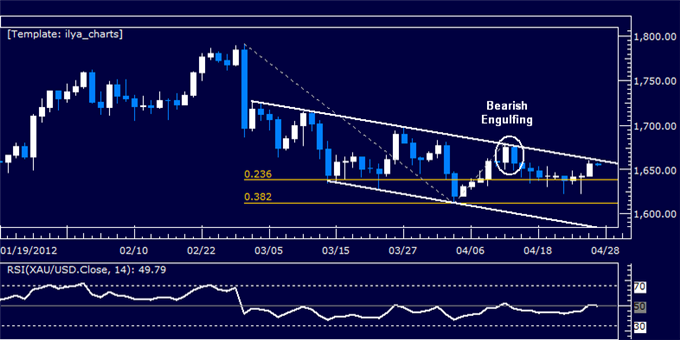 Prices put in a Hammer candlestick above support at 30.23 and rebounded to retest a previously broken barrier at 31.11. A push above this exposes falling trend line resistance at 31.70. Alternatively, a reversal lower through immediate support targets the 30.00 figure.

Prices broke back above 3.713, a former support level recast as resistance, with bulls now aiming to retest the underside of a formerly broken Triangle formation (now at 3.816). The 3.713 level is support once again.