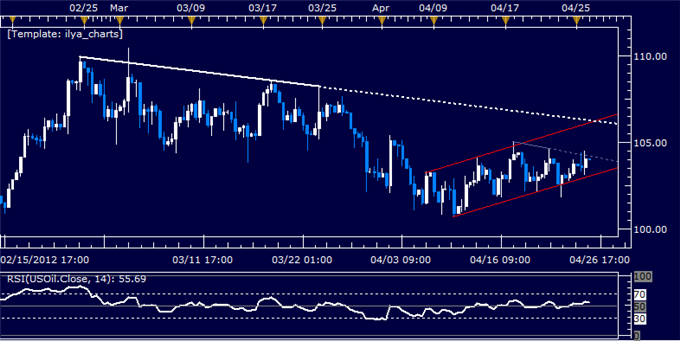 Commodity prices are pushing broadly higher as the impact of yesterday’s FOMC monetary policy announcement continues to be digested across financial markets. The run-up in crude oil and copper makes sense considering the Federal Reserve upgraded its outlook on growth and employment, meaning the ability of a stronger recovery in the US to offset headwinds from Europe and China appears better-supported. S&P 500 stock index futures are pointing higher ahead of the opening bell on Wall Street, arguing for more of the same ahead. Strength in the precious metals space seems out of place however.

The rebound in gold and silver prices mirrored by weakness in the US Dollar appears to reflect rebuilding QE3 expectations after Fed Chairman Ben Bernanke said policymakers were “prepared to do more” to help the economy if growth faltered, singling out additional asset purchases as still “on the table”. Taken in isolation, the statement seems to project the likelihood of another balance sheet expansion, but rushing to such a conclusion seems premature.

Keeping QE3 “on the table” makes sense. After all, it would unreasonable to expect the Fed to do nothing if growth were to falter anew. Meanwhile, Bernanke made it clear that additional asset purchases were not favored, saying it would be “very reckless” to allow higher inflation for the sake of reducing unemployment. Coupled with an upgraded view on the economy’s performance through the remainder of the year, this hardly seems to foreshadow additional stimulus in the pipeline, warning that precious metals may be quick to shed recent gains as markets thoroughly digest the Chairman’s commentary.

Prices are testing support at 1638.02, the 23.6% Fibonacci expansion, after putting in a Bearish Engulfing candlestick pattern below falling trend line resistance set from early March. A break lower exposes the 38.2% level at 1612.02. Falling channel top resistance is now at 1661.66. 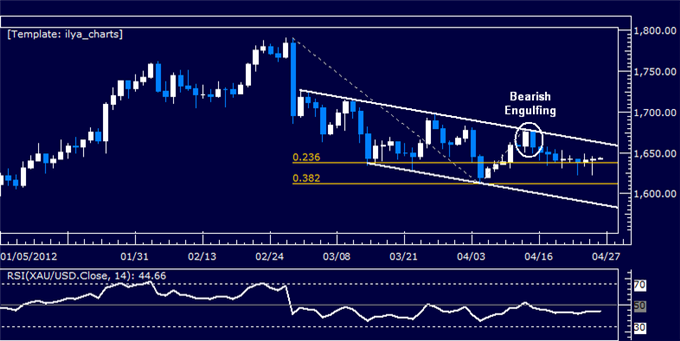 Prices continue to probe lower after taking out support at 31.04, with sellers eyeing the next downside target at 29.79. The 31.04 level has been recast as near-term resistance. Broadly speaking, a Head and Shoulders (H&S) top carved out between late January and mid-March argues for a measured downside target at 26.84.

Prices are testing resistance at 3.713 after bouncing from support at a rising trend line set from early October. A break higher exposes 3.752 – the March 22 low, as well as the underside of a formerly broken Triangle pattern now at 3.811. Trend line support is now at 3.603.