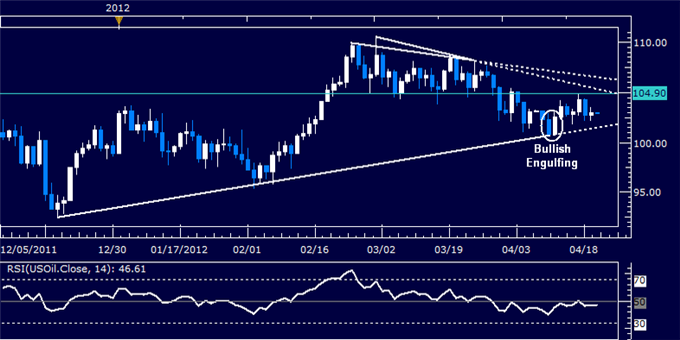 Commodity prices are on the upswing amid swelling risk appetite ahead of the opening bell on Wall Street. The chipper mood follows an unexpected pickup in German business confidence (albeit a very modest one) as well as broadly supportive outcomes on the day’s earnings calendar. The day’s key reports from Schlumberger, General Electric, Kimberly-Clark, Honeywell and McDonald’s uniformly showed better-than-forecast outcomes on headline EPS readings.

More of the same appears likely ahead, with S&P 500 index futures in strongly positive territory. This bodes well for crude oil and copper, where prices remain closely correlated with sentiment trends. Gold and silver are likewise pointing higher as the risk-on mood trims safe-haven demand for the US Dollar, offering de-facto boost to precious metals. Negative sideline comments from the G-20 Finance Ministers’ meeting as well as the ongoing IMF and World Bank summit seem to represent the only potential pitfall into the week-end.

Prices remain wedged between resistance at 104.90 and a rising trend line support set from mid-December, with a Bullish Engulfing candlestick pattern arguing for an upside bias. A break above 104.90 exposes falling trend line barriers at 105.28 and 106.49. Support is now at 101.51.

Prices are testing support at 1638.02, the 23.6% Fibonacci expansion, after putting in a Bearish Engulfing candlestick pattern below falling trend line resistance set from early March. A break lower exposes the 38.2% level at 1612.02. However, a Doji candlestick warns of indecision and opens the possibility of a bounce. Trend line resistance is now at 1668.21. 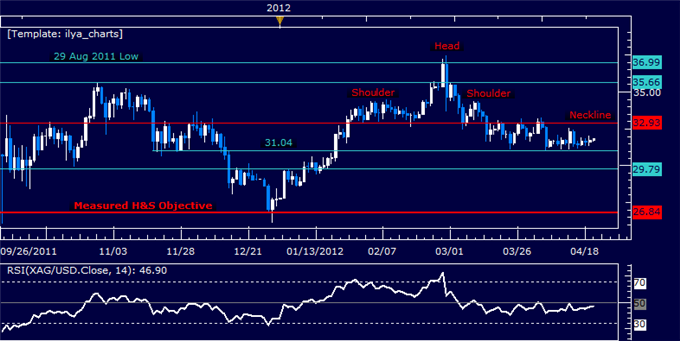 Prices put in two back-to-back Hammer candlesticks above rising trend line support set from early October, hinting a move higher may be ahead. Initial resistance lines up at 3.716, the 38.2% Fibonacci retracement. A break above this barrier exposes the 50% level at 3.761. Trend line support is now at 3.628. 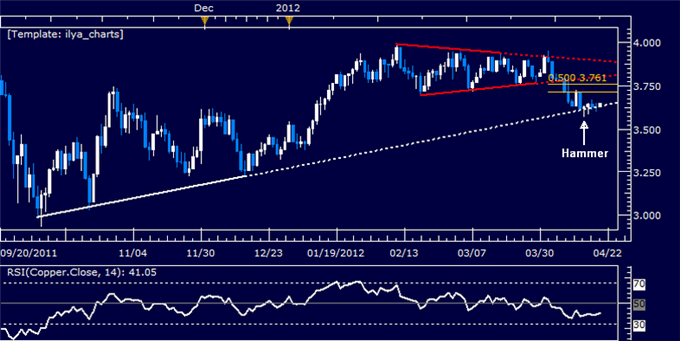