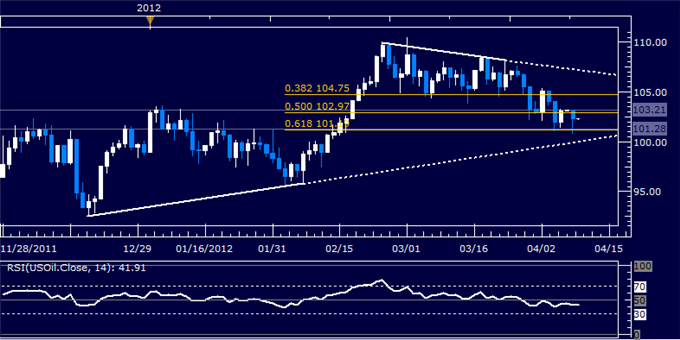 Commodity prices continue to reflect sour global growth expectations coupled with rebuilding hopes for additional Federal Reserve stimulus. Cycle-sensitive crude oil and copper on the defensive while gold and silver edge higher on the back of demand for an alternative to paper currencies as markets look ahead to the possibility of further dilution of the money supply. The environment reflects the ramifications of last week’s disappointing US employment data coupled with downgraded hopes for PBOC rate cuts, a worry that emerged after China reported higher-than-expected inflation figures yesterday and an unexpected return to trade balance surplus today.

Looking ahead, the spotlight is pointed at scheduled commentary from Dallas Fed President Fisher, Atlanta Fed President Lockhart and Minneapolis Fed President Kocherlakota. Although only Lockhart is currently on the rate-setting FOMC committee, Kocherlakota and Fisher were voting members last year and ought to be intimately familiar with the arguments in favor of and against additional easing. This means their remarks may prove market-moving, especially in the absence of other more potent catalysts.Comments perceived as increasing the probability of a third round of Fed quantitative easing (QE3) are likely to boost risk appetite and drive commodities broadly higher, while those reinforcing the status quo will probably produce the opposite effect.

Prices are reversing lower from resistance in the 102.97-103.21 marked by January top as well as the 50% Fibonacci retracement to once again challenge the 61.8% level at 101.19. A break below this boundary exposes rising trend line support set from mid-December, now at 100.04.

Prices put in a Shooting Star candlestick below support-turned-resistance at 1644.45, hinting an upswing over the past three sessions may have run its course. A reversal downward from here sees initial support at 1634.76,the 38.2%Fibonacci expansion, with a break below that exposing the 50% level at 1615.46. Alternatively, a push through resistance targets the 23.6% Fib at 1658.57. 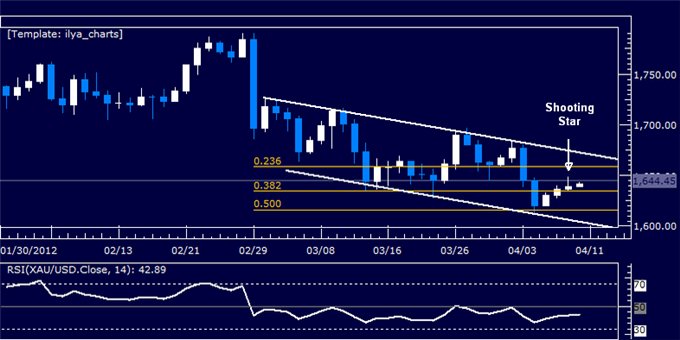 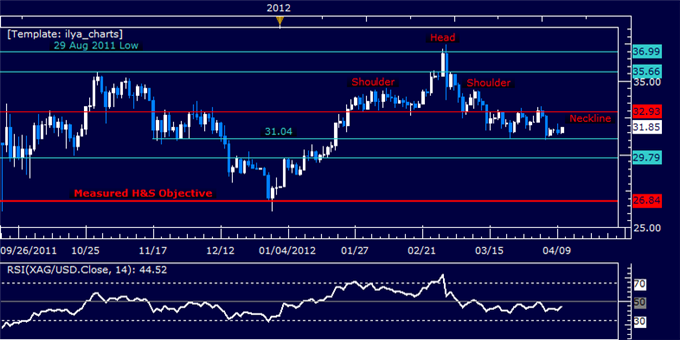 Prices took out the bottom of a Triangle chart pattern carved out since early February to find interim support at 3.696, the 38.2% Fibonacci retracement. A break below this boundary exposes the 50% Fib at 3.606, a boundary reinforced by a rising trend line established from early October now at 3.594. Initial resistance lines up at 3.808, the 23.6% retracement. 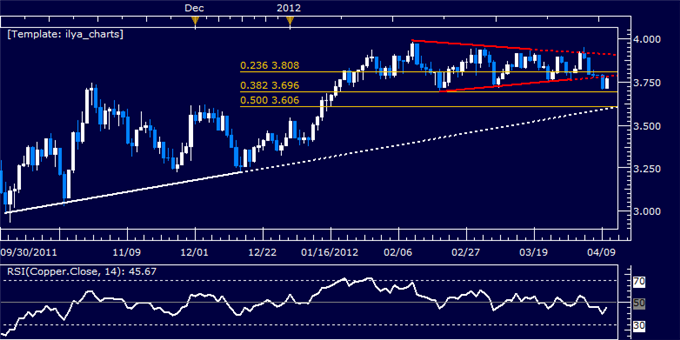